Artvin: Where you can touch the clouds 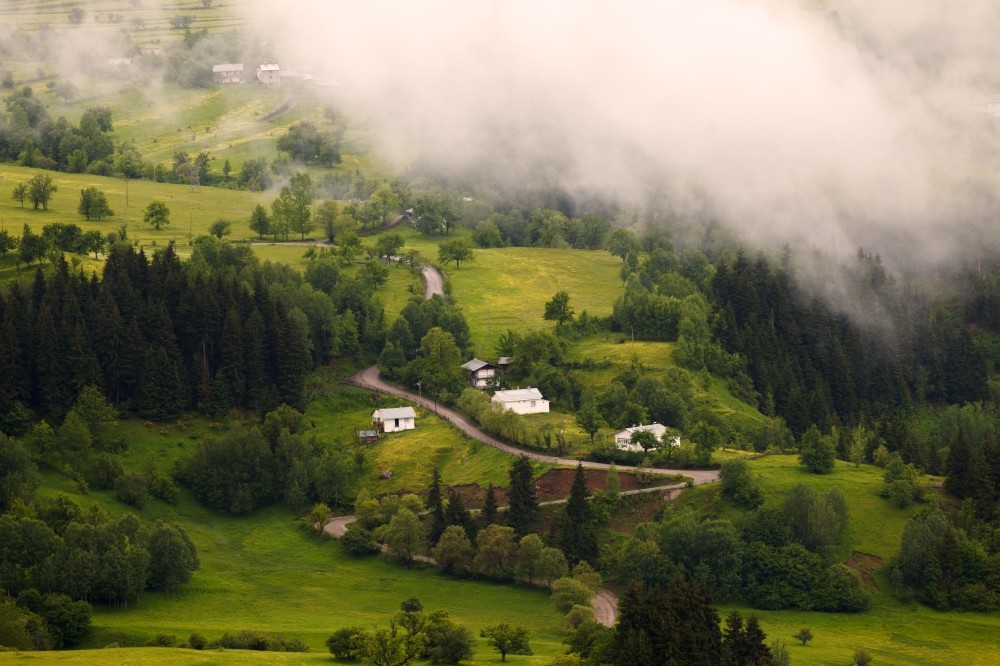 Artvin's breath-taking nature is something that everyone should see in their life times.
by Daily Sabah with AA
Nov 18, 2017 12:00 am

With foggy mountains, thick forests and rich culture, it is no wonder Artvin has been chosen as one of the top tourist destinations in the world, offering a wide range of activities, as a jewel of the Black Sea that everyone should visit least once in their lives

Driving down the roads of Arvin, one can sometimes feel as if heading to a fairy tale land above the clouds. This dreamlike land mesmerizes its visitors with it mountains, reaching as high as 4,000 meters, and rock formations cut by one of the longest-running rivers in Turkey. Covered with forests of tall pine trees, Arvin is a small Black Sea city, but nonetheless, its breathtaking nature is among the wonders everyone should see at least once.

Situated on the border of Georgia, Artvin was recently listed among the "Top Tourists Destinations," a report prepared by Euromonitor International. Surrounded by steep valleys carved by the Çoruh River, high mountains of Kaçkar, Karçal and Yalnızçam and forests and national parks such as the Karagöl-Sahara, which contains the lakes Şavşat and Borçka, Artvin is an alternative tourism destinations for those who like to get lost in the creations of Mother Nature.

Artvin experiences the Black Sea region's signature climate: The city is very wet and mild by the coast, and as a result, is heavily forested. The rain, a very frequent visitor to the region, turns to snow at higher altitudes, and the peaks are very cold in winter.

The Caucasian and Black Sea cultures are dominant in the region. Arvin is home to the Laz people as well as the Kipchaks and Muslim Georgians who migrated to the city when the modern northern borders were draws following the Turkish War of Independence. As a microcosm of its region, city, the city of Artvin hosts a rich culinary tradition. Hamsi, Turkish anchovies, are a main course in the city. Corn flour and kale are also frequently used in the area's kitchens.

The folkloric dance, Artvin Barı-- generally known as "Atabarı," the dance dedicated to the founder of the modern Republic of Turkey, Mustafa Kemal Atatürk-- is the signature dance of the city. Every year, the Traditional Bull Fighting Festival and Kafkasör (Caucasian Cultural Festival) attract thousands of tourists to the city.

However, Artvin's main tourist attraction is unquestionably its nature. Since nature is a great part of the city, both geographically and culturally, alternative tourism opportunities such as camping, skiing, jeep safari, rafting and canoeing are popular.

There are various trekking routes visitors can explore to discover the area. One of the highest mountains in Turkey, Mount Kaçkar, is probably the most covered trekking route. Mountaineering groups and mountaineers complete the Trans-Kaçkar route by walking through Yusufeli Yaylalar Village to Rize - Çamlıhemşin Ayder Highlands. If that trail is a bit too difficult, you can take various other routes through the Altıparmak Mountains.

Hunting is also allowed during the region's open season. However, visiting hunters are advised to hire a local guide to avoid getting lost in the thick forests of Artvin.

The first is the Şavşat Castle located in the Söğütlü Quarter in the city. Built by the Armenian Bagratunis dynasty in the ninth century, the castle was later used by the Ottomans. Today the castle is abandoned but parts of its towers are still visible.

Also built by the Kingdom of Bagratuni in the 10th century, Artvin Castle is located on a huge rocky outcropping near the Çoruh River.

The third, Ardanuç Castle, is among the most significant ruins in the region. Dating back to the region's ancient civilizations, the castle had been an attraction for centuries, due to its unique interior design. Even the Ottoman Sultan Suleiman the Magnificent recorded his interest in this castle.

Artvin province is also home to several national parks, the most famous being Karagöl-Sahara National Park, which came under state protection in 1994. Covering 3,251 hectares, the national park is composed of two areas. The Karagöl side consists of kale and thick trees and is used as a recreational area by locals. In the Sahara part of the national park, locals continue traditional Black Sea highland life.

Hatila Valley National Park consists of a steep-sided river valley at the eastern end of the Kaçkar Mountains. The area is close to the Black Sea but has a micro Mediterranean climate with warm summers, cool winters and plentiful rainfall throughout the year. The park's forests and surrounding areas are rich in wildlife. Large mammals found here include the grey wolf, red fox, lynx, leopard, brown bear, wild goat, chamois, roe deer, wild boar and European hare.

Being chosen as a top destinations in Turkey along with Istanbul, Antalya and Edirne kindled widespread excitement among the government and locals of Artvin.

Speaking to the press, Artvin Governor Ömer Doğanay said: "Our city has unique natural and cultural riches. With its natural lakes, forests, water sources, rivers and cultural riches, Artvin is like a piece of heaven. I believe that Artvin will be one of the big players in the tourism industry in the years to come."

"Artvin welcomed 2.4 million visitors last year and has already become one of the top 100 destinations in the world. We anticipate the city will welcome 2.8 million visitors by 2020," Mayor Kocatepe declared.

"Artvin is among the top six most livable cities in Turkey. Our aim is to increase our city's tourism potential without disturbing its natural and cultural wonders."