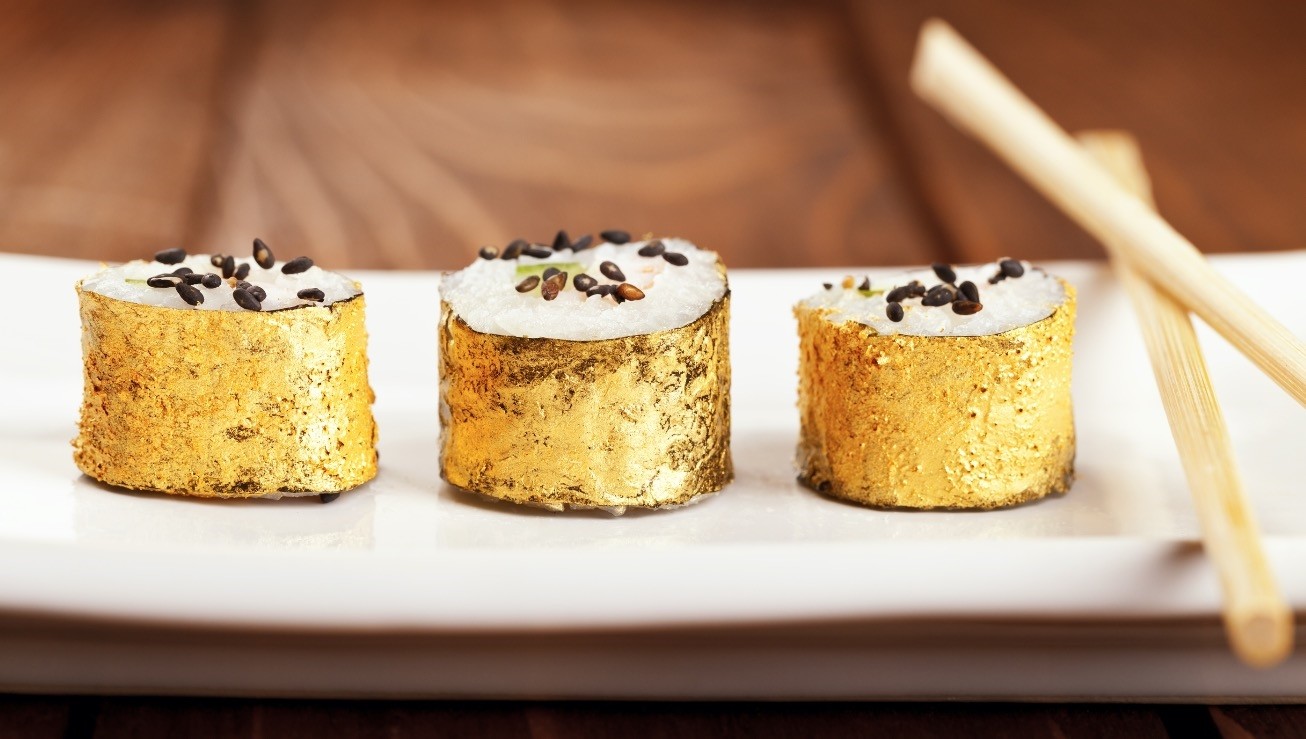 Edible gold, which was first used as a food ingredient by the ancient Egyptians, is now seen as a sign of wealth.
by İklim Arsiya
Nov 30, 2017 12:00 am

The obsession with edible gold is taking the luxury cuisine world by storm, as flavorless, odorless, nontoxic, edible gold is used as a garnish for desserts, cocktails and even main courses such as hamburgers and sushi

While coating your food with gold may seem like a modern, innovative delicacy, the technique isn't a new gastronomical trend but has been around for many centuries. According to gold leaf producer Manetti, edible gold dates back to ancient times; in Europe, the product was used for decorating dishes in the Middle Ages. Historically, the Elizabethan English embellished their meals with pure gold leaf. Gold dust tea has also been traditional for centuries in Kanazawa, Japan, which is well regarded for its production of gold leaf.

Ever since the time of the Egyptian pharaohs, gold has been considered to be the only way to win the favor of the Gods. In ancient Egypt, gold leaf was used to decorate the tombs of pharaohs, as well as sarcophagi. The first use of gold has been traced to Alexandria, Egypt, over 5,000 years ago. The Egyptians were the first to use gold as a precious metal, and they made the first iterations of what we today consider jewelry. The Egyptians also consumed gold for the mental, bodily and spiritual purification that was associated with it. The alchemists of Alexandria developed an elixir made of liquid gold that they believed was capable of rejuvenating, restoring youth and ridding the body of all earthly diseases. It is thought that Cleopatra slept in a pure gold facemask every night as a means to enhance her bewitching beauty.

Although some people are still skeptical about the consumption of gold and see it purely as a way of feeding the ego, there are neither side effects nor benefits from eating the thinned out invaluable metal. Gold is considered biologically inert, meaning it passes through the digestive tract without being absorbed into the body. This means you can eat your fill of 24-karat gold, whether in the form of leaf, flake, dust or petal, without falling ill.

Mundane meals with a hint of gold

Whether it be a glimmer of gold on a piece of chocolate cake or a stunning metallic hint on a truffle, edible gold is commonly seen as a decorative element for a luxury loving sweet tooth. However, finding that edible gold is used in meals as mundane as a hamburger or a pizza has certainly led to both doubts and curiosity. Many restaurants, likely for publicity, have created a dish of newsworthy expense featuring gold. In 2012, a New York City food truck sold a $666 "douche burger" that wrapped truffles, lobster, caviar and a beef patty inside six sheets of gold leaf. Margo's Pizzeria on the Mediterranean island of Malta sells a pizza for nearly $2,000 that has 100 grams of white truffle and edible gold.

The most extravagant dessert In NYC

The gilded ingredient has provided a helping hand in elevating the status of one New York-based restaurant, Serendipity 3, after it received a number of Guinness World Records for its gold infused dishes. During its history, Serendipity 3 has been known for creating the world's most expensive dessert: A $25,000 ice cream sundae containing edible 23-karat gold and 28 cocoas, called "Frozen Haute Chocolate." The sundae, created in 2007, overtook the restaurant's previous record for the "most expensive dessert:" Their "Golden Opulence Sundae," which they still sell for $1,000. According to the restaurant's founder and owner, Stephen Bruce, "Everything looks better covered in gold," with the restaurant beginning its relationship with the ingredient in 2004.

Nestle stepping up the gameSimilarly, a limited edition golden Kit Kat was produced in Australia and sold for AU$88 to celebrate the Chinese New Year. Inside the Kit Kat bar there were Phoenix Oolong tea leaves from Guangdong Province in China, combined with lychee and rose petals. The bar was then wrapped in a 24-karat gold leaf and topped with whole rosebuds and rose jelly.

A delicacy fit for a sultanWhen you think of the Ottoman Empire, luxury and history come to mind. It's no surprise to have some of the finest edible gold desserts served in the ornate, former Ottoman palace overlooking the Bosporus, the Çırağan Palace Kempinski. The Sultan's Golden Cake is available in the Çırağan Palace Kempinski Hotel located in Istanbul, for the hefty price of $1,000 and is made of figs, pears, apricot and quince that are put into a Jamaican Rum and soaked for two years. To finish, the cake is topped with French Polynesia vanilla bean, caramel, black truffles and a 24-karat gold leaf. It is said that the cake takes about 72 hours to make, and once it is ready to be served, it is placed inside a sterling silver cake box with a golden seal. However, the cake is usually only made per request: Usually for a wedding, celebration, or for a sultan himself.