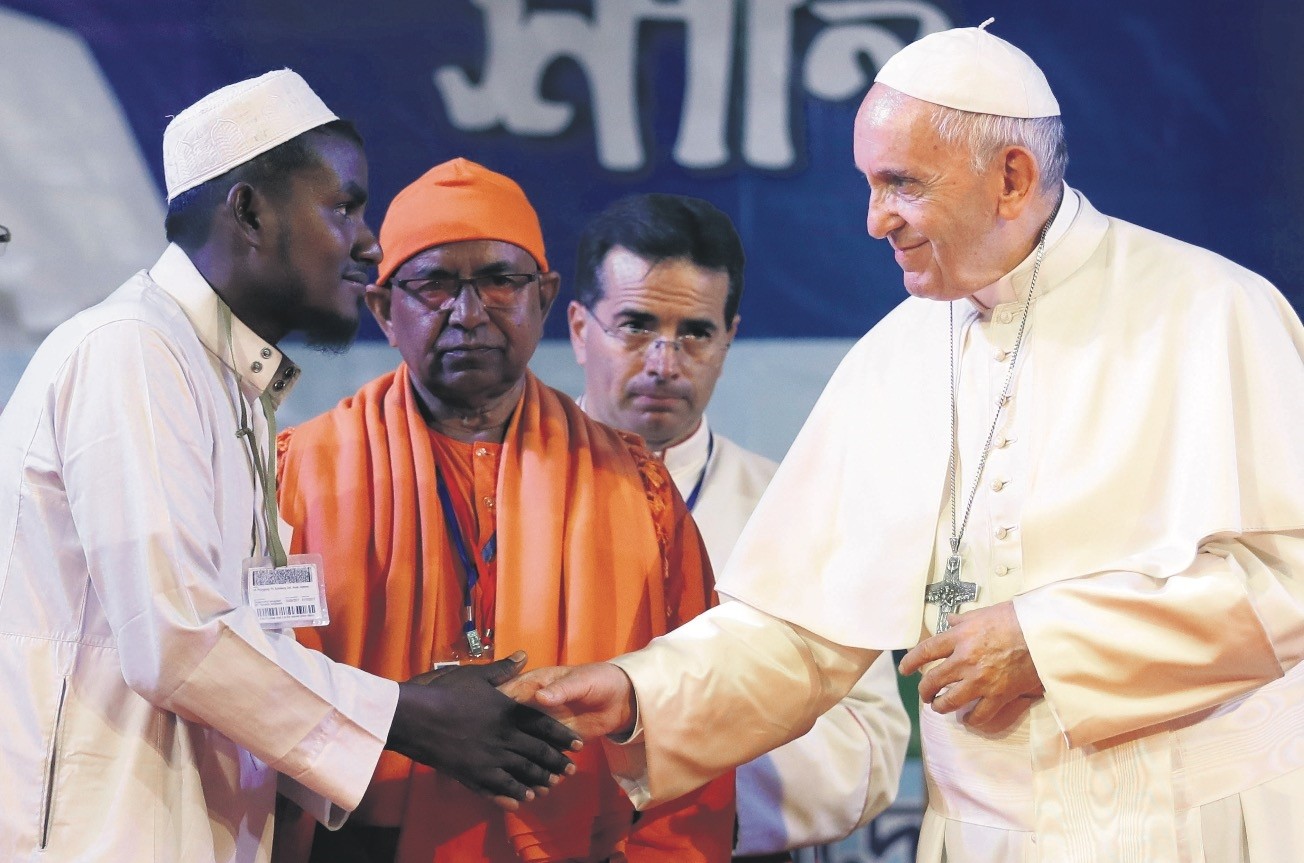 Pope Francis (R) shakes hands with a Rohingya Muslim refugee during an interfaith and ecumenical meeting for peace in the garden of the archbishop's residence, in Dhaka, Bangladesh.
by Jane Louise Kandur Dec 07, 2017 12:00 am

Last week, Pope Francis’s visit to Myanmar was reported in much of the international media, this paper included. The main focus was not the actual visit to Myanmar, but the Pope’s failure to mention the word Rohingya. However, only a few observers have detected a taint of hypocrisy in the Pope’s actions. The fact that two years ago the pope spoke from St. Peter’s Basilica in Rome of the Armenian genocide puts his failure to mention what is happening to the Rohingya in a very different light

The Muslims who live in the Rakhine State have been subjected to what the United Nations, the United States and other nations, Turkey included, classify as genocide. This is not a new situation, and the decades-long systematic persecution of the Rohingya has taken on a much more sinister nature in the past year. Villages are being burned down, women raped, children killed, all in an effort to eliminate the Muslims from this area.

The Rohingya, who are Bengali-speaking Muslims, have lived in the Rakhine region for generations. When Burma became independent, the Rohingya were given the same rights as any other Burmese citizen. But as is so often the case, military intervention, coups and takeovers changed the scene; today the Burmese government does not recognize the Rohingya, considering them to be in the country illegally.

It is estimated that many thousands have been slaughtered in Rakhine, with over half a million fleeing to neighboring Bangladesh - a country that is in no way equipped to handle a flood of refugees.

Pope Francis, the leader of the Catholic Church, seen by many to be a champion of the oppressed and persecuted, not only failed to speak about genocide or ethnic cleansing on his visit to Myanmar; he did not even mention the word Rohingya during his meetings with the Myanmar leader Aung San Suu Kyi and the head of the armed forces, Min Aung Hlaing.

The Pope did mention that there should be respect for all people's rights, and called for peace. He said: "Religious differences need not be a source of division and distrust, but rather a force for unity, forgiveness, tolerance and wise nation-building."

But such a call rings hollow. The pope failed to mention the human tragedy that has unfolded in front of a watching world. A few days later, when in Bangladesh, Pope Francis did speak to the Rohingya, asking them for forgiveness to what they had been subjected to and "the indifference of the world."

But there, when he was on the spot in Myanmar, the pope did not speak about the systematic slaughter of the Rohingya.

It is not so much that he did not utter the word Rohingya. That is, to some extent, understandable. The Myanmar government does not recognize the Rohingya as a people; it is for this reason that they have no rights in the country. They simply do not exist. To speak of a people that your interlocutor denies the existence of could be seen to be nonsensical. The Vatican said that Pope Francis avoided mentioning the Rohingya in an attempt to build bridges.

But did the pope did not speak of the Muslims in the Rakhine district. The government of Myanmar knows and acknowledges that these "illegal immigrants" exist in this district. The pope could have mentioned the plight of these people, without even referring to their religion. But, his advisors say, he was worried that there would be blowback on the small Christian minority in the country.

But two years ago, in a speech made from St. Peter's Basilica, the pope did not hold back for diplomatic reasons. He showed no interest in building bridges. He spoke out, and described the large number of Armenian deaths that occurred during the intercommunal violence during World War I as genocide. Two years ago, the pope said: "Concealing or denying evil is like allowing a wound to keep bleeding without bandaging it."

The Turkish government and people have a large number of issues with the claims of an Armenian genocide. The claim that the Ottoman government systematically targeted 1.5 million Armenians has not been borne out by examination of contemporary sources. In fact, these sources estimate that there were just over 1 million Armenians living in the Ottoman territory prior to World War I. That a huge number of Armenians lost their lives during the violence, during their forced relocation, is not denied by anyone. But historians and contemporary sources state that the number of Armenians who tragically lost their lives during this era as being closer to 600,000.Whether the number is 600,000 or 1 million, this is a large number of deaths from one community. However, this number must be understood in the context of World War I, when millions lost their lives in the bloody battlefields, in the confusion of war. Supplies were scarce, and logistics chaotic. The Armenians were marched across the country, quite often with scanty guards - most soldiers were busy fighting. They were often attacked by locals who were infuriated by the fact that many Armenians had collaborated with the Russians.

There is little evidence that there was a decision to eradicate the Armenians from the Ottoman territory. But without examining contemporary documents, it would be impossible to determine the presence or absence of a decision to carry out genocide.

Yet despite the fact that no commission has been set up to examine archives anywhere in the world, and despite the fact that the Armenian and British archives remain firmly sealed, Pope Francis felt confident enough to speak out. He spoke from a pulpit in Rome, putting the term "Armenian genocide" on record. Mevlut Çavuşoğlu, the Turkish foreign minister, responded at this time, saying: "Religious offices are not places through which hatred and animosity are fueled by unfounded allegations."Religious offices are places to offer healing, to lead the way in humanitarian struggles. Yet, it was this same pope who failed to even mention the cruel slaughter of Muslims in Myanmar. He refused to even speak the name of the Rohingya people. He failed to speak out, only talking about the plight of these people once he had left the country. The reason he gave for this was that he needed to build bridges to establish dialogue in the hopes that the Myanmar government would change their minds about slaughtering innocent men, women and children.

In the pope's own words "Concealing or denying evil is like allowing a wound to keep bleeding without bandaging it." There is no question that people in Rakhine are being target and murdered. What is happening in Rohingya is genocide; the world is standing by and watching.The evil is being ignored, concealed and denied.

What is happening to the Rohingya is happening now. This is not an "evil" that occurred 100 years ago. This is not something carried out by a government that no longer exists, which is no longer relevant in our age. The head of the Myanmar government was awarded the Nobel peace prize for her efforts to represent an oppressed people, to speak up for freedoms. Unfortunately, the people Aung San Suu Kyi spoke out for were not the Muslim residents of the Rakhine region.

By ignoring what is going on in Myanmar the pope has done nothing to help the people there. The pope's identity is as a person who speaks up for the oppressed. Yet he failed to do this. As one person wrote on Twitter: "Jesus wasn't a coward. He didn't not speak to avoid persecution of his followers." Another commented "Say the word man. Jesus would have!"

The pope's error was not merely that he did not mention the slaughter of Muslims in Rakhine. Two years ago, by standing up and speaking of an Armenian genocide, when no such thing has been established, when no efforts have been made to prove or disprove the claim, he took sides. He could better have used his speech on that day in Rome to convince the sides to come together and examine the truth. But he preferred to come down on the side of the Armenian community. And last week in Myanmar, the pope came down on the side of the government, abandoning the defenseless people who had hoped that Pope Francis, famed as a humanitarian, might speak out for them.

The pope is in a privileged position. He is not an elected leader. He is the leader of the Catholic Church, and admired by people all over the world, no matter their religion or denomination. But it seems that political concerns can sway the pope. When addressing a congregation that includes Armenians, he speaks of an Armenian genocide. When speaking to generals and political leaders in Myanmar, he does not even mention the Rakhine Muslims.

The pope must speak out for defenseless people. The pope should not let political or denominational or religious concerns prevent him from speaking out for those who cannot defend themselves. The pope has one of the greatest examples of humanity to follow - that of Jesus. But he has failed to use the influence he has in a just or humanitarian way.