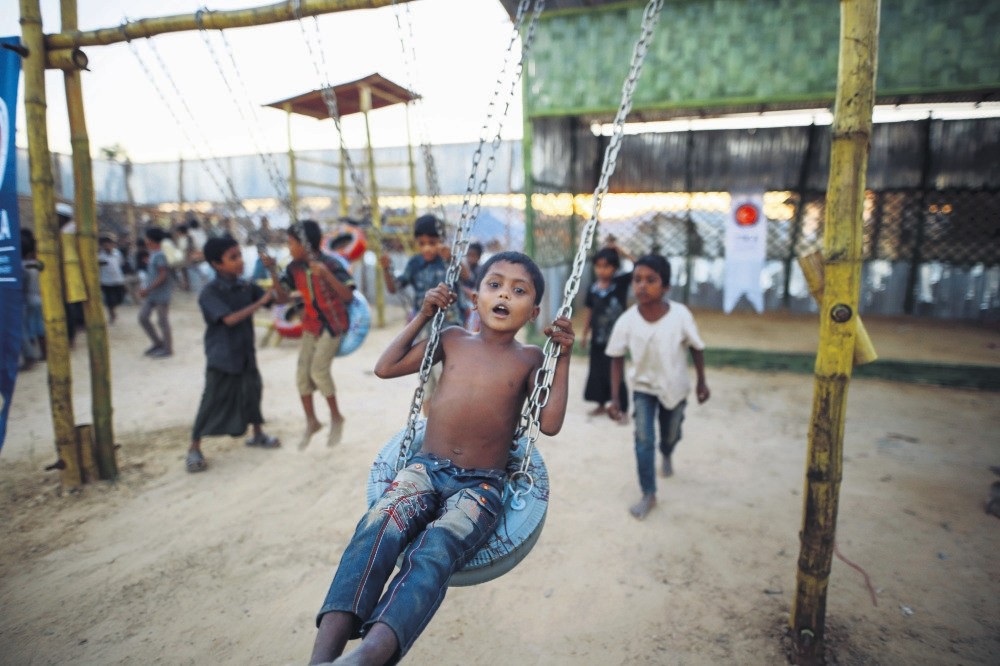 The playground is designed from materials that can be found in the area, such as bamboo, with the help of an architect from Dhaka.
by Daily Sabah with AA Dec 08, 2017 12:00 am

Children represent the hope for peace and a better future. Keeping that in mind, Turkey's Cooperation and Coordination Agency (TİKA) embarked on a mission to keep Rohingya children's spirit up by building a playground at the refugee camp in Bangladesh

Turkish charities have been working hard to provide for Rohingya Muslims who are living in rough conditions in Bangladesh's refugee camp. Included in their efforts, the Turkish Cooperation and Coordination Agency (TİKA) built the camp's first playground and the biggest modern kitchen in the region.

According to U.N. data, the number of Rohingya Muslims taking refuge in Bangladesh after fleeing the cruelty in Myanmar has risen to 626,000, with 55 percent of that number being children.While providing food, healthcare, shelter and new facilities for Rohingya Muslims, TİKA has also developed projects for the camp's youngest residents. The only playground of the Tankhali makeshift camp in Cox Bazaar province was built within this framework.

Thanks to TİKA's resourceful thinking, the playground's equipment was built with locally sourced materials. The park, located near the shelters, is the size of a small football field. The new equipment includes swings and seesaws as well as miniature goalposts.

"We later realized that most of the people in the campsite were women and children. Many children came to get food packages. We wanted to do something for the children and later discovered the empty space," Dinçer said.

Detailing the process of building the playground for the children, he added, "We designed the park from materials we found in the area, like bamboo, with the help of an architect from Dhaka. After it was done, we opened the playground for the children.""The children are really happy. When they smile, we all smile. All the tension of the day can be forgotten with the smile of a child. All of our fellow workers, volunteers and charities can agree that the happiness of the children is worth all of the problems we face here. The only source of amusement for these children is this playground," the assistant director explained.

Playground to be transferred to UNICEF

Noting that even the camp's younger children carry a load of responsibilities, he continued, "We see that these children have responsibilities starting at the age of 5. The family expects them to bring their lunch of rice and meat."

"We just want to make them forget these problems for a while with this playground," he added.

TİKA plans to transfer the playground to UNICEF. The transfer is expected to be done with a memorandum of understanding to be signed soon. It is also indicated that UNICEF authorities really liked the playground.

After arriving in the district after the crisis at the end of August and making a lot of progress, especially related to the camp's food supply, TİKA also brought something new.

To help provide hot meals for the 5,000 or 6,000 families - nearly 25,000 people - every day, TİKA has built a large kitchen in the camp. With a high priority on hygiene, the kitchen is the biggest and most modern kitchen in the region.

TİKA's chef Tarık Aksu said they cook meat, chicken and rice that total 2.5 tons of ingredients every day and serve it with 34 staff members from Bangladesh and Rakhine.

Asserting that they pay attention to the people's preferences, Aksu added, "Everyone seems satisfied with our meals. I visit all the camps with a translator to ask what they need and whether they like the food. We have received very positive feedback."

Myanmar's Buddhist majority denies that Rohingya Muslims are a separate ethnic group and regards them as illegal immigrants. The Rohingyas are stateless Muslim minority who have long faced persecution in Myanmar, which regards them as illegal immigrants from Bangladesh. The U.N. says more than 600,000 have arrived in the last year, swelling camps that were already home to between 300,000 and 400,000 refugees. Bangladesh has allocated land to accommodate some 800,000 refugees in one massive camp, but the U.N. has warned that such a large concentration in one area could promote the spread of disease.