Love of cats a sign of faith in Islam 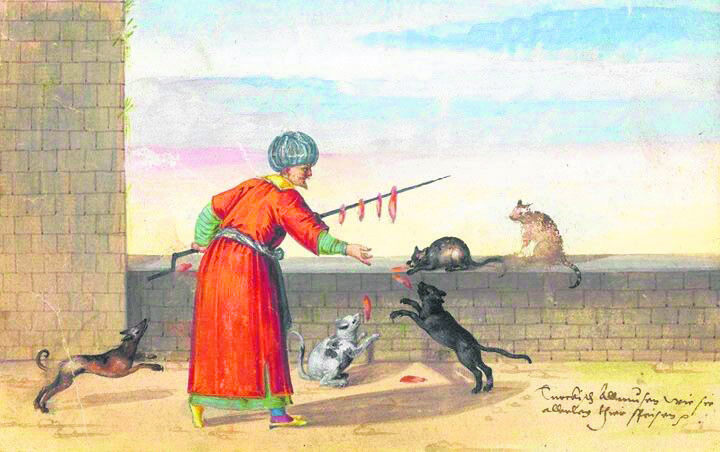 A painting depicting an Ottoman feeding street cats and dogs with meat.
by Ekrem Buğra Ekinci Dec 11, 2017 12:00 am

Cats are known to be ungrateful while dogs are renowned for their loyalty. However, this is not the case in Islamic-Turkish culture, where cats and dogs held a place completely different

Istanbul's cats are as famous as its dogs. Nowadays, the new pastime among neighborhood locals is feeding street cats. When these people go out on the street, all of the neighborhood cats gather around them and open their mouths as if mobilization was declared. They are a far cry from catching rats, let alone rummaging through the garbage.

The kid of the house

Mice were the unwanted inhabitants of old wooden houses and cats were their mortal enemies. In the past, a house without a cat was unthinkable. Not every cat can catch a mouse since it must be a mousing cat. Cats that are not hunters by instinct are paired with the hunters and they get used to the job in a short period of time.

Cats were fed not only to catch the mice but to befriend children and the elderly. Especially people who see no loyalty from their relatives or friends, or people who have no children, show their love and compassion to the cats. Prince Şerefeddin Efendi was exiled from his homeland, forcing him to live alone in Beirut. It was his lifelong companion, his cat, who notified the neighbors of his death.

Every domestic cat is almost like the kid of the house. When someone in the household shows a child even slightly more interest, they get jealous. There were people who looked after dozens and even hundreds of street cats and fed them. The stories whose protagonists are genies, always featured a cat as the genie in disguise.

Cats are smart animals with strong senses. Even if they go miles away, they can find their way back home. According to the common belief, cats are ungrateful, while dogs are renowned for their loyalty. However, the religious scholars favor cats, which expect their sustenance from god without showing gratitude to anyone, but they do not favor dogs which is beleoved to "dirty" their owners.

In Islam, if cat urine stains one's clothes, it is not regarded as dirty, while a dog's saliva is considered to be dirty and if it gets on your clothes you cannot pray in them unless the stain is rinsed off. In fact, according to the Shafii school of thought, if a dog's saliva stains one's clothes, that stain is required to be rinsed off seven times in order to be able to pray in them again.

Prophet Muhammad's fondness for cats is conveyed in his hadith: "Affection for cats is part of faith" (Maqasid al-Hasanah, al-Sakhawi). So, loving a cat is a sign that someone is a believer. When Prophet Muhammad came across a black-and-white Abyssinian cat breastfeeding her kitten during the Uhud campaign, he changed the course of his soldiers. On his way back he adopted this cat and gave her the name "Muezza." One day, he slightly tipped his cup so that a cat passing by could drink some water.

A companion of Prophet Muhammad was given the name Abu Hurairah, which means "father of cats." Abu Hurairah was given this name because wherever he went, he always had a cat with him. It is even said among the people that Prophet Muhammad stroked the back of a cat for strangling a snake that was about to harm someone and that is why cats land on four feet and not on their backs.

The nickname of Pir Asad, one of Rumi's caliphs, renowned for his love of cats, was nicknamed "Pisili Sultan" (Sultan with Kitties). When his beloved cat died, he had it buried right near his foot. They say that while Ahmed Rufah, one of the elders, was sitting, his cat came and fell asleep on the sleeve of his robe. When the time for Friday prayer arrived he did not want to disturb the cat, so he cut his sleeve off instead of waking it.

The prophet's hadith, "Have mercy on the creatures of Allah so that Allah may have mercy on you," was the motto of the elderly. The prophet also said that a woman who kept a cat locked up and failed to feed it until it died, would be sent to hell, while a prostitute, who gave water to a dog that was dying from thirst, would be forgiven.

There is a mosque in Damascus called Masjid al-Qitat. "Qitat" means "cats" in Arabic. It is also a foundation that was established to protect the cat thrown out in the street. The caretaker of the mosque purchases liver with the some of the foundation's income and feeds hundreds of cats every day.

There are too many kinds of cats. They are from the same species as lions and tigers. Some of them are incredibly beautiful, and for some stroking their hair is the greatest pleasure. İsmet Sungurbey, a teacher of law in Istanbul, fed hundreds of cats in his school's garden. Later he wrote a book called "Hayvan Hakları" (Animal Rights). Arndt, a chemistry professor at Istanbul University, taught lessons with his cat on his shoulder. The cats that were allowed to roam freely and go in and out and fall asleep wherever they want with

out being bothered we called the "Master's cats."

There were also those who were not too fond of cats. Sultan Abdülmecid was allergic to cats, and he did not want to be in the same room with one. The story goes that one morning, while reciting the Quran, he went out for a while, and when he came back, he saw that a cat had scratched and stained the pages. That was the last time he came near cats again. As a matter of fact, when he and his men stepped into Beykoz Palace one time, a cat came out to meet them and he immediately ordered his men to "turn back." But his son Sultan Abdülhamid adored cats. This sultan had a white long-haired cat named "Agha Effendi."

As apartment life began, the glorious days of cats came to an end. Current houses are not suitable for feeding cats. Cats are clean animals, but they want a house with a garden. Now that cats serve as a toy, they are in a state of numbness and forgetfulness of their true nature. Moreover, even if Islam does not allow people and animals to be sterilized, they forced to endure this operation so that the owners are comfortable.

There is also a place for cats in oriental literature. A poet called Maali, who lived in the time of the Sultan Süleyman the Magnificent, wrote a requiem for cats. Namık Kemal, one of the 19th century poets, wrote a poem similar to this, which describes the merits and superiorities of cats with humorous language.

Stories, jokes and sagas feature cats as well. The story goes that Nasreddin Hodja's wife cooked and then devoured 3 kilos of liver that he brought. In the evening when he came home, she blamed a cat. He then weighed the cat which tipped the scale at 3 kilos. "Lady, if this is the cat then where is the meat, if this is the meat then where is the cat?" he famously asked his wife. Though cats are famous for theft, the poor animals are blamed for almost everything that is lost.