Jerusalem in the heart 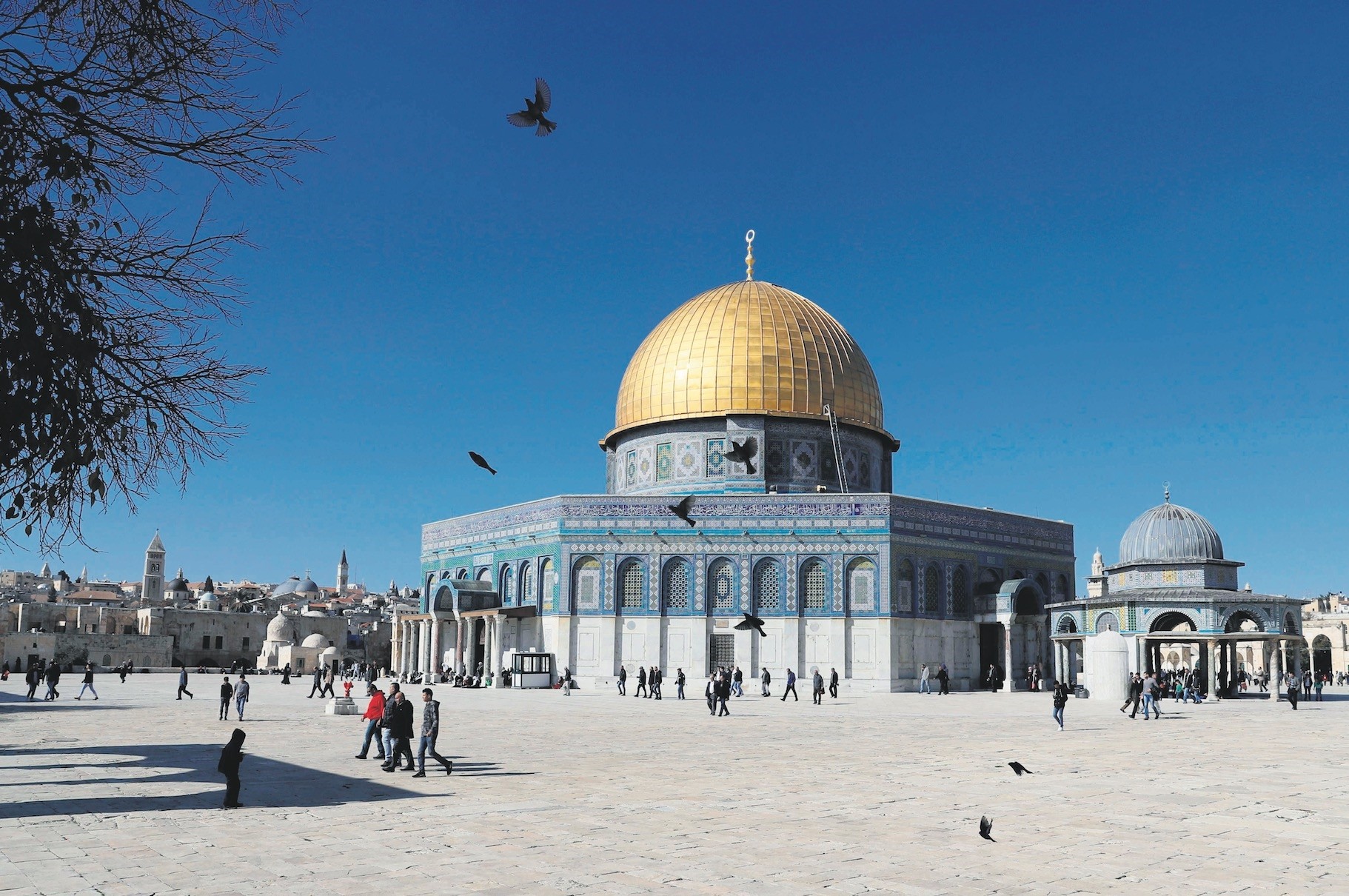 Palestinian Muslim worshippers walk past the Dome of the Rock at the Al-Aqsa Mosque compound in Jerusalemu2019s Old City after U.S. President Trumpu2019s decision to recognize Jerusalem as the capital of Israel.
by Ekrem Buğra Ekinci Dec 14, 2017 12:00 am

U.S. President Trump's announcement that the U.S. will move its embassy in Israel to Jerusalem has stirred the pot and the motives of this eccentric president, who falls on the world's agenda with every action he takes, are unclear

The 1-square-kilometer Old Jerusalem has a medieval cityscape with stone buildings and winding, narrow streets. The Old City is divided into four sections – the Muslim, Christian, Armenian and Jewish quarters – and one can move freely between them. The first three mostly consist of shops and shrines. At the top of the shops are small, ramshackle houses.

Even though Israel declared Jerusalem its capital in 1980, and moved its parliament there, the international community does not accept it and continues to have their diplomats in the recognized capital of Tel Aviv. U.S. President Donald Trump's announcement that he would move the U.S. embassy to Jerusalem has stirred the pot. It is not clear whether the eccentric president who falls on the world's agenda with every action he takes, like a bull in a china shop, has made a promise to the Jewish lobby, received a concession from Israel, is pushing the Palestinians for peace, wants to attract attention or just wants to change the agenda.

The city of peace

When King David died in 973 B.C., his son King Solomon succeeded his father and ordered the construction of the famous and the magnificent First Temple. Al-Aqsa Mosque is built on top of this temple. King Solomon rebuilt Jerusalem and ordered the construction of buildings, palaces, gardens, pools and shrines throughout the city. It was the most prosperous and beautiful city in the world. The name at that time was Yerushalayim, which means "Foundation of Peace." This name is not mentioned in the Torah. Its former name before the time of King David was Zion.

Jerusalem also caused the first separation between Jews. A group of Jews opposed the founding of Jerusalem and the temple, which they saw as a reform. A group of Jews who did not recognize the temple as sacred established a separate sect, the Samaritans who today live around Nablus. Jerusalem was occupied and burned by the Babylonian King Nebuchadnezzar II in 587 B.C. He killed most of the Jews and exiled the rest to Babylon. When the Persians defeated Babylon, they allowed the safe return of the Jews in 539 B.C. Jerusalem was later occupied by Alexander the Great in 332 B.C., and the Romans in 63 B.C.

Jesus Christ lived in Jerusalem and ascended to heaven from this city. Everywhere in Jerusalem there are traces of Jesus. According to Christian belief, the Via Dolorosa (Road of Grief), the road on which Jesus was forced to walk while carrying his cross to his crucifixion, and the Church of the Holy Sepulcher, built by Byzantine Empress Helena, are two of the most significant places for Christianity.

Upon the Jewish rebellion, Roman commander Titus burned down Jerusalem completely. The only standing part of the First Temple was the western wall, today known as the Wailing Wall. Jews were then exiled from Judea and spread throughout the world.

The period of peace

Prophet Muhammad ascended on the Meraj (Ascension) from a still-existing stone in Jerusalem and met with the souls of previous prophets atop the Temple Mount, which was demolished at that time, and prayed with them. The Quran mentions this miracle and calls Jerusalem a sacred city.

Jerusalem, whose name was Ilya then, was conquered peacefully during the reign of Caliph Umar. The public set a condition to give the city to the caliph in person. The caliph came alone, took the city and gave a written charter to the people to secure their rights and freedoms.

Caliph Umar wanted to pray somewhere, and he was shown the Church of the Holy Sepulcher. The caliph said: "If I pray there, then they will turn it into a mosque" and prayed somewhere nearby. This is how the period of toleration and peace that would last for centuries in Jerusalem began.

Muslims called the city Maqdis or al-Quds, which means "sacred place." Al-Aqsa Mosque is the third most important place in Islam, as well as the first qibla for Muslims. The Umayyad Caliph Abd al-Malik built the Dome of the Rock on the rock where Muhammad had ascended. This building, which shines with a golden dome, is considered a symbol of Jerusalem even today. In the place where the First Temple was located and above the Wailing Wall, Umayyad caliph al-Walid built a mosque. Even though in 1099 the Kingdom of Jerusalem was established in the city where crusaders invaded and slaughtered the people, in 1187 Saladin took Jerusalem back on the night of ascension.

Sultan Süleyman the Magnificent gave the final form to Jerusalem by surrounding the city with walls. He rebuilt the city. The street in front of the wall and one of the gates of the city were named after him. The Ottoman era was a period of peace and serenity for all religions. The key of important religious places with common importance for every faith was held by an Ottoman corporal, thus ensuring that faiths could be practiced without bothering one another.

After Jerusalem was seized by the Muslims, Jews were allowed to come and worship in the city, but were not allowed to live there. On Dec. 9, 1917, during World War I, Jerusalem was captured by the British, and Ottoman domination, which started amicably in 1516 and lasted four centuries in peace, came to an end.

The Jewish influx began in Palestine. With the 1917 Balfour Declaration, the British promised Palestine to the Zionists. In the same year, Arabs led by Sharif Husayn Pasha, who rebelled against Committee of Union and Progress (CUP) persecution, had the same dream. The Jewish population outscored Arabs in the time of the British mandate, when the new Jerusalem was founded.

In 1948, the state of Israel was established. Israel declared the 25-square-kilometer West Jerusalem as the capital city in 1950, contrary to the U.N. decision, and moved the departments of government, including the parliament there from Tel Aviv. They won the Six Days War of 1967 and invaded East Jerusalem, which had been held by Jordan since 1946. In Jerusalem, where 100,000 Jews and 60,000 Arabs lived in 1948, the Jewish population rose to 197,000 in 1967.

Jerusalem is a place to which Christians and Muslims attach greater religious importance than Jews. But for the Zionists who dream of rebuilding Solomon's Temple, Jerusalem has symbolic significance. On Aug. 21, 1980, the declaration that Jerusalem united the city with its eastern and western sides as the eternal capital of Israel raised a great reaction. Turkey even removed its ambassador. This fait accompli was later accepted. At that time, 28 percent of the city's population was Arab. While Israel was founded in 1947, Britain proposed that Jerusalem be an open, international city. Today, the international community is in favor of the idea that Jerusalem, divided between Israel and Palestine, should be the capital of two states.