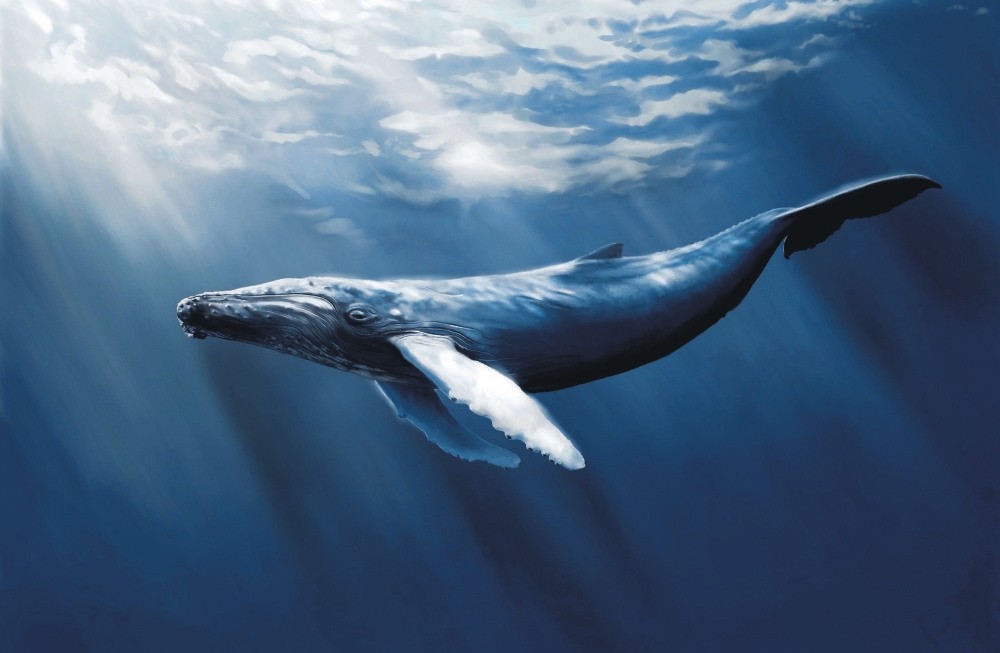 Blue Whale game, also known as the Blue Whale Challenge, consists of 50 horror missions such as watching a horror movie for a certain period of time, making scratches on arms or legs, listening to very loud music, seeing no one for a very long time.
by Ayşe Betül Bal Dec 15, 2017 12:00 am

Video game addiction has been a problem for children and teenagers for some time now, but with the ‘Blue Whale Challenge' it has turned into something that threatens players' lives

Evrim Mertin, 24, was known to be successful, responsible and well mannered. A student at the Department of Economics at Gazi University, he had a habit of playing online games. But, his habit turned into an addiction and before his family realized, it was too late.

How far can addiction to video game go? Some people play games for days without eating properly, others don't sleep for days on end. As for Evrim, his addiction ended, with suicide: The young man hung himself on Aug. 5, 2017, allegedly as instructed in the final mission of an online game called the "Blue Whale."

After his tragic death, his family members realized that their son's recent change of behavior could have been connected with that game and eventually decided to take legal action.

Computer, video or online games played on social media accounts are often considered as some alternative world to real life, which experts believe is the main reason why more and more people are getting into digital games.

Psychologists and experts working in the field comment that such alternative worlds offer people with opportunities they don't have in real life, in some cases a better job and a better look.

If people, especially children, use online games in order to escape the reality of their own lives, as experts put it, how can they explain when those games offer players an alternative life that is way worse than the real life?

The case file which involves the statements of Nuran Mertin, Evrim's mother, presented to the Ankara Chief Public Prosecutor's Office was shared with Daily Sabah by his parents' attorney Mehtap Demirhan.

According to the file, Nuran Mertin said that his son had inflicted wounds on his arms and legs with razor blades. When his mother questioned him about the wounds, the young player responded, "It is just a scratch, I hit it somewhere."

In time, his mother said he started to throw up occasionally and again tricked his mother into saying, "I am okay."

The Blue Whale game, also known as the Blue Whale Challenge, consists of 50 horror missions such as watching a horror movie for a certain period of time, drawing whales on your arms and legs, scratching your arms and legs, listening to very loud music, seeing no one for a certain period of time, climbing high places, being sick and finally, committing suicide.

These tasks are given to the player by an unknown "master," who checks in regularly whether the players are obeying the rules. This process of monitoring is carried out with webcams, according to recent reports in local and international media.

One of the missions of the game involved doing self-inflicted harm. Evrim Mertin's medical reports found that he cut his arms and legs. It was understood shortly after his suicide that he completed some other missions, including listening to horrifying music or locking himself in his room.

His mother claimed, "He once did not leave his room for two days. Even when his sister and brother-in-law wanted to see him, he told them to leave him alone."

According to the Mertin family attorney, the Blue Whale Challenge looks to make people feel alone, unhappy, insufficient, worthless and unneeded. More importantly, the administrators obtain the players' personal information with the online links they send, which can be used as blackmail in order to keep the person in the game.

Evrim's terrifying attitude was not the only change recognized by his family before his suicide. According to his family's statements, he took his mother's phone and deleted some messages. Furthermore, he took his mother's signature on blank paper for no reason. His mother said that he trusted her son and gave him her personal passwords. Maybe Evrim received threats, so he felt obliged to use such information. He also bought black tape to cover his computer's camera, which may prove that he may have felt threatened, his family claimed.

After his death, Evrim's parents also realized that he had deleted all of his photos from their cell phones.

According to the Information and Communication Technologies Authority (BTK), this game is not a regular game and can reach children by links directed from the game administrators on social media.

"People who want to play this game receive a link that includes malware planted by the apparent administrations of the game. They steal the players' personal information and use them to eventually blackmail and cyberbully the players.

The tasks the players are forced to do at midnight injure their emotional health. At the end of this process, the false standards of judgments and the feeling of insignificance are aroused in the players and they are directed to commit suicide as an ultimate ending," the BTK reported.

A number of similar incidents of suicide, related to the game, have been reported around the world. According to the BBC News, a 17-year-old Indian girl admitted that she was playing the game on her phone and she received threats.

"My mother was going to die if I did not complete the last mission," she said.

There were also reported cases in Russia, the epicenter of the game. The first case was of two teenage girls, Veronika Volkova, 16, and Yulia Konstantinova, 15, who both committed suicide by jumping off an apartment building.

According to the Russian media, Konstantinova's last post of on social media was a picture of a blue whale with a note saying "end," while Volkova had also made a final post, saying, "Sense is lost… End."

A total of 130 suicides in Russia from Nov. 2015 to April 2016 were analyzed, and at least 80 of them were thought to be connected to the Blue Whale Challenge, according to the Russian website, Novaya Gazeta.

In November 2017, 22-year-old Philipp Budeikin, the creator of the game, was arrested by the Russian authorities and jailed for three years for encouraging people to commit suicide.

Even after Budeikin's arrest, many warnings about the Blue Whale Challenge continued to surface as authorities in Russia, Germany, England, and France asked parents to look out and take precautions.

Evrim Mertin was not the only victim of the Blue Whale Challenge, but we hope he is the last. Hence, authorities should take the right measures and assert a comprehensive study on technology usage and addiction.

Access to harmful games should also be prevented. At this point, parents have a huge responsibility. They should talk to their children about the games they play online, and they should create different environments so that their children do not look for a "better" alternative to real life.