Jerusalem, the capital of Palestine 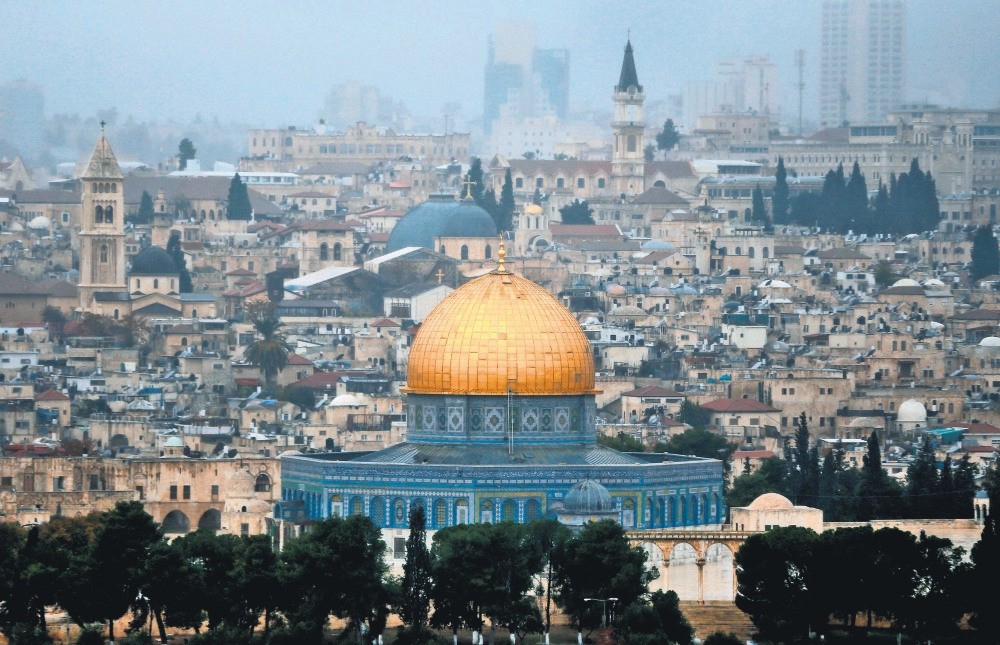 A view from the Mount of Olives shows the Old City of Jerusalem with the Al Aqsa Mosque Complex. Israel seized West Jerusalem in the 1948 Arab-Israeli War, and grabbed the rest of the city in the 1967 Six-Day War.
by Jane Louise Kandur Dec 16, 2017 12:00 am

When declaring that the U.S. would now recognized Jerusalem as the capital city of Israel, President Trump said it is nothing more or less than a recognition of the reality; yet this statement about the reality has caused great distress, unrest and anger in a large part of the world. The sad fact is that one country's reality is not perceived by other countries as the actual truth

Last week, U.S President Donald Trump declared that he, and ipso facto, the U.S., recognizes Jerusalem as the capital of Israel. This statement meant that years of careful tiptoeing around regulations and resolutions had been thrown to the wind.

The said regulations include a 1995 U.S. bill that was passed into law by the Senate with a 93-5 margin, and by the House, with a 374-37 margin. The resulting law states that Jerusalem is Israel's capital and that the U.S. Embassy should be moved there.

Presidents Bill Clinton, George W. Bush and Barack Obama have chosen to implement a presidential waver, delaying the enactment of the law. The waver allows such postponement if there is a threat to national security. But Trump decided enough was enough, and refused to sign the waver, thus making the implementation of the law, i.e., the move of the embassy and the recognition of Jerusalem as the capital of Israel, mandatory.

Nations all over the world stood up in anger, shaking their fists at Trump, shouting how dare you. It was not only Muslim-majority countries such as Turkey, Pakistan and the Gulf states who protested; Britain, France and Germany were also flabbergasted.

Thr German Chancellor, Angela Merkel, said the "German government does not support this position, because the status of Jerusalem is to be resolved in the framework of a two-state solution." French President Emmanuel Macron stated that the move was "a regrettable decision that France does not approve of and goes against international law and all the resolutions of the U.N. Security Council."

The Dutch Foreign Minister Halbe Zijlstra said: "We think it's an unwise step and a counterproductive step." Even Pope Francis, now infamous for sitting on the fence in Myanmar, joined in the furor. He stated that Jerusalem is a holy city for Christians, Jews and Muslims, and its status quo should be preserved.

If the entire world is shocked and horrified by Trump's move, why did U.S. Congress pass such a law in 1995? Why did Americans let this bill become law, and why did it pass with such a large majority?

The easy answer is the Israeli lobby in the U.S. This is the strongest and most powerful lobby. But there is more to the matter than Israelis lobbying U.S. representatives.

According to Israeli law, Jerusalem has been considered to be the capital of Israel since the 1980s. Add to this the de facto control that Israel has over both East and West Jerusalem.

So then what is the problem? Why shouldn't Jerusalem be recognized as the capital of Israel? The problem is simple. Palestine considers Jerusalem to be the capital of Palestine. Israel has invaded both East and West Jerusalem. Jerusalem is actually part of Palestine, and belongs to this sovereign state. Israel just occupies the city. And there is another, greater, more sinister problem.

Countries like the U.S., Britain, France and Germany - all countries that were aghast at Trump's reckless move - do not recognize Palestine as a sovereign state. While 70.5 percent of the countries that are members of the U.N. have recognized Palestine as a sovereign state that has the right to declare its own capital in its own territory, these force-wielding powers have as yet failed to do so.

The attitude this creates is easy to see in the mainstream press. For example, The New York Times discusses the issue of Trump's recognizing Jerusalem as Israel's capital. This respected paper discusses how most people are looking for a peace deal that will give West Jerusalem to Israel and East Jerusalem to a "future Palestinian state." A future Palestinian state? Palestine exists today. It is a sovereign state today, but the implication here is that Palestine has not yet achieved statehood. Israel seized West Jerusalem in the 1948 Arab-Israeli War, and it grabbed the rest of the city in the 1967 Six-Day War, but neither of these made Palestine any less a sovereign state, nor Jerusalem any less its capital.

Out of the 193 countries in the U.N., 70.5 percent recognize the state of Palestine. A minority of countries refuses to recognize Palestine. That does not change the reality that Palestine exists.

The decision by Trump to recognize Jerusalem as the capital of Israel and move the embassy there has been interpreted in a number of ways, as a distraction for the American people to deflect them away from his own legal problems, or a throwing down of the gauntlet to get on with the peace deal, or a show of strength, or a display of pure ignorance. Whatever may be behind this move, the fact is that the foundations were laid long ago.

Reports dating back to last January have foreseen that Trump would move the embassy to Jerusalem. His selecting David Friedman as ambassador to Israel signaled this. Friedman is opposed to a two-state solution; when nominated he said that he looked forward to working "from the U.S. Embassy in Israel's eternal capital, Jerusalem". That statement alone should have raised many more flags than it did. The writing was on the wall.

Ignoring half the truth does not mean that what is left is the truth. Blinkered commentary is neither accurate nor informative. Foreign missions to the state of Palestine exist because the state of Palestine exists. The city of Jerusalem is divided because Israel seized first the western half, and then the eastern half. Israel has established its parliament, Supreme Court, and government in West Jerusalem.

But this does not mean that Jerusalem belongs to Israel. Most countries have refused to recognize Israel's annexation of East Jerusalem. It is for this reason that most embassies are in Tel Aviv.

The move of the U.S. Embassy to Jerusalem means that not only will the U.S. continue to refuse to recognize the existence of the State of Palestine; it is now ratifying Israel's annexation of East Jerusalem.

Trump has just been honest. He is the little boy in the crowd who calls out the uncomfortable truth that the emperor has no clothes.

In an ideal world a little boy with zero filters, a total lack of diplomacy and stunted insight would not be given the reins of the most powerful country in the world. But we don't live in an ideal world.

Trump's only fault in moving the American mission to Israel to Palestine is that he acted upon laws that had been passed before he came to the presidential office, laws passed while he was still a television celebrity. His only fault is that he said what everybody else was trying to hide.

If Britain, France, the Netherlands and Germany were honest, were honorable, they would first officially recognize Palestine as a legal entity. Although these countries have had a great deal of debate and there has been a lot of positive noise being made about officially recognizing the state of Palestine, these countries have, as yet, failed to do so. They should recognize Palestine as a sovereign state and set up embassies for representatives to Palestine in Jerusalem. Rather than responding to Trump by slapping their palms to their foreheads and saying "There he goes again," they need to put their money where their mouths are. For once. And for all.

OIC countries consider Trump's action to be "null and void legally" and "an attack on the historical, legal, natural and national rights of the Palestinian people, a deliberate undermining of all peace efforts, an impetus to extremism and terrorism, and a threat to international peace and security." Many OIC countries are planning to open embassies to Palestine in Jerusalem.

So now what? One side says black and the other says white. Trump, that is the U.S., says that Israel's capital is Palestine. Although his allies in Europe and Canada are showing displeasure and discomfort, they do not recognize Palestine as a sovereign state. As far as logic and honesty is concerned, they do not seem to have a leg to stand on. Unless they decide to recognize Palestine.

But there is a larger body, a body that is said to speak for the entire world. This is the U.N. Although the U.N. can be criticized for being America/Euro-centered, its resolutions are considered to be binding for all. And the U.N. has passed a number of resolutions on Jerusalem, all of which say basically the same thing. Look at the following excerpts from U.N. Resolution 476, passed in 1980

"Deploring the persistence of Israel, in changing the physical character, demographic composition, institutional structure and the status of the Holy City of Jerusalem.

"Gravely concerned over the legislative steps initiated in the Knesset with the aim of changing the character and status of the Holy City of Jerusalem."1. Reaffirms the overriding necessity to end the prolonged occupation of Arab territories occupied by Israel since 1967, including Jerusalem.

"3. Reconfirms that all legislative and administrative measures and actions taken by Israel, the occupying Power, which purport to alter the character and status of the Holy City of Jerusalem have no legal validity and constitute a flagrant violation of the Fourth Geneva Convention.

"4. Reiterates that all such measures which have altered the geographic, demographic and historical character and status of the Holy City of Jerusalem are null and void and must be rescinded in compliance with the relevant resolutions of the Security Council."

Trump wasn't wrong. American legal reality recognizes that Israel's capital is Jerusalem. But American law is for America. The U.N., which represents the conscience of the world, which purports to be the voice of the world, does not agree. Jerusalem belongs to Palestine. Jerusalem is the capital of Palestine. And so it will stay in our hearts and our minds. No matter how Trump perceives the truth to be from the other side of the Atlantic.