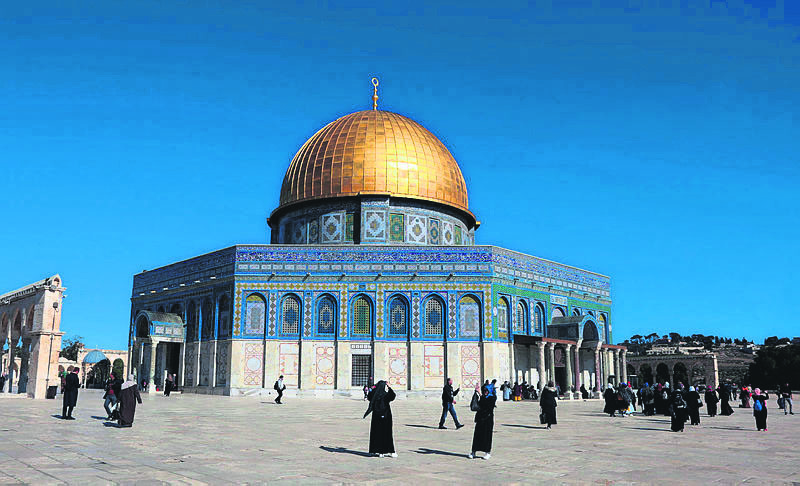 Holding its symbolic significance for the three Abrahamic religions today, Jerusalem has come to the forefront of politics once again after U.S. President Donald Trump recognized the city as the capital of Israel.
by Merve Çalhan Jan 03, 2018 12:00 am

Jerusalem, or Al-Quds as the Arabic speaking world calls it, remains on the agenda after its recognition as the capital of Israel by U.S. President Donald Trump, and while the U.N. General Assembly condemned the U.S. decree on the city, Iran had a protective position over it

British General Edmund Allenby entered Jerusalem on foot and issued a famous proclamation declaring British control of the holy city on Dec. 11, 1917. As it was narrated in plenty of history books, after two days he entered Jerusalem, approached the symbolic coffin of Saladin – one of the most legendary sultans of Islamic history known as the conqueror of Jerusalem – and said, "wake up Saladin, we came back again." It was 100-year- old history that ended 400 years of Ottoman rule in Jerusalem. We are living in 2018, but the city still holds its symbolic significance with divine affection from Muslims, Christians and Jews. The U.N. General Assembly on Dec. 21, 2017, marks a momentous milestone for both the devout people from these three Abrahamic religions and the international community, which was courageous enough to defend the rights of the Muslim community living under a long-term embargo of Israel in Palestine.

U.S. President Donald Trump's decision to recognize Jerusalem as Israel's capital is continuing to cause anger in the Middle East. Palestinians have been involved in nearly non-stop protests and clashes with Israeli forces for almost two weeks ever since Trump decided to end U.S. neutrality on one of the most complex issues in the region, and both Palestinians and Israelis continue to lay claim to the ancient city. The decision was followed by a wave of condemnation from European and Muslim leaders. Following protests and denouncements, the U.N. General Assembly held an emergency session on the status of Jerusalem on Dec. 21, 2017.

Member states voted down the Trump decision and announced recognition of Jerusalem as the Israeli capital "null and void." Not only has the city been attributed particular prominence by the states represented at the General Assembly in terms of its legal status under international law, but also its geopolitical significance by countries that are engaging in a proxy war stalwartly in pursuit of regional hegemony in the Middle East. One of the military leaders of those countries, Iranian Revolutionary Guards Commander Gen. Qassem Soleimani, has lashed out at Trump and labeled his tortuous move "cheap and stupid." Moreover, he also tried to incite Palestinians into an intifada with provocative statements. Given that the widespread public resentment toward Israel is louder than before, a rational explanation for Iran's rhetorical denunciation of Israel deserves a multifaceted analysis in order to not miss a single avenue. Based on a methodology of logical deduction, decomposition of analysis must be based on Iran's hegemonic desire to expand its reach all the way to the Mediterranean Sea and northern borders of Israel.

Iran's interest in Jerusalem is particularly different from other countries in the region. It is more than the sacredness of Jerusalem, as since the early 1990s, every four years Tehran has been holding conferences specifically in support of the Palestinian issue and assembling foreign guests and those who oppose Israel's unjust occupation of Palestine. Throughout the conferences, the stage is decorated with a large map of Israel and the Palestinian territories covered in the colors of the Palestinian flag. Beyond any doubt, Iran does not organize these events just to spark the interest of the international community on how brutal aspects of Israel's occupation badly affect the lives of Palestinians, but to defend its geo-strategic anchor as an eternal agent of the spiritual bastion of Shiite Islam in the region.

Moreover, ever since the Iranian Revolution of 1979, Iran has been implacable against Israel and has provided extensive financial and military support to Palestinian groups regularly. Iran's protective position over Jerusalem probably will not bring about new dynamics in the region, but it strengthens Iran's hand at most, according to pundits. As Levent Tok from Anadolu Agency (AA) argued, due to the failure of Arab countries to be able to unify around a holy pursuit such as Jerusalem, Iran has grabbed a dominant role as if it is one of the staunch supporters of Jerusalem and chalked up enough points by attending the extraordinary meeting of the Organization of Islamic Cooperation (IOC) chaired by President Recep Tayyip Erdoğan. Nevertheless, having been in league with Bashar Assad against Syrian society, Iran proved that its primary target is neither Israel nor independence for Jerusalem. Literally, Iran is using Jerusalem as a strategic shield in order to cover its war crimes in Syria.Having consolidated its domestic regional power over antagonism of Israel and advocacy for Palestine, Iran aims at dominating the region in order to weaken all aspects of Sunni influence.

In addition, Iran is availing itself of the Palestine crisis as a face-saving method in Syria, where it has lost its prestige through its persistent support of Shiite paramilitary forces in order to keep Assad in power. Speaking to Daily Sabah, Taha Dağlı, who is the director of international news on Channel 7, said Iran has stolen a rather unique role from Sunni Arab countries to protect Jerusalem and it will make the most of this occasion to sneak up on the Sunni world. In addition, it is an irretrievable opportunity for Iran, while some Arab and Muslim countries such as Egypt, the United Arab Emirates, Morocco, Saudi Arabia and Kazakhstan were represented by ministers at the OIC summit in Istanbul.

Throughout the meeting, Iranian President Hassan Rouhani stated that every possible caution must be considered to hinder this illegal action by the U.S. administration, but the one question that sticks out here are what factors and elements made it possible for the U.S. to make such an outrageous decision.The exact rationale behind Trump's controversial recognition of Jerusalem as the capital of Israel is still a mystery. Having wrapped itself up in defending Palestinian rights, Iran has made us check up on its intimacy with Palestine society, which is another mystery experts studying the region are trying to clarify. Barbara Slavin, the director of the Future of Iran Initiative at the Atlantic Council, underlined that being one of the intense defenders of Palestinian rights does not remove Iran's stigma for backing Assad. It seems that Iran's cordiality is still a clouded issue for Middle East experts.

In many ways, Iran's approach to politics in the Middle East is based on a political opportunism fueled by Shiite expansionism. In fact, Iran's hostility toward Israel has nothing to do with the country's willingness to defend the rights of Palestinians trying to survive under Israel's relentless blockade. It can only be understood as a strategic choice of rulers in order to follow the path of their expansionist agenda that is prescribed in Shiite doctrine. Simon Mabon, a lecturer at Lancaster University's International Relations Department, justifies Iran's multifaceted way of doing politics in the Middle East. He said that Iran has concrete ties with the historic Shiite narrative of Karbala and the ideology of Velayat-e Faqih (Guardianship of the Islamic Jurist), where the constitution articulates the need to provide support to oppressed Muslims around the world. It gives the Islamic Republic the chance to regain legitimacy it has lost in Syria through rhetoric and support for groups such as Hezbollah.

Following the OIC summit led by Erdoğan to condemn the U.S. recognition of Jerusalem as Israel's capital, the international community is mobilizing against and raising its voice against Trump's unjust declaration. A Palestinian TV channel called Quds News Network has been reported that Palestinian Authority President Mahmoud Abbas is planning to pay a visit to Iran in the coming days. Speaking to Daily Sabah about the visit, Slavin claims that the upcoming meeting is mostly to show the U.S. that Abbas has other options. While the Palestine issue is evolving to another prominent arena, fierce competition between the U.S. and Iran is warming up. Taking into consideration all the catchy views in order to reveal what is really going on behind the scenes, Jerusalem is once again center stage with its deep historical importance in the region. No matter what happens in the status of the divine city in the future, Trump's declaration of Jerusalem as Israel's capital plays into the hands of Iran to pursue its ideological and hegemonic ambitions in the region.