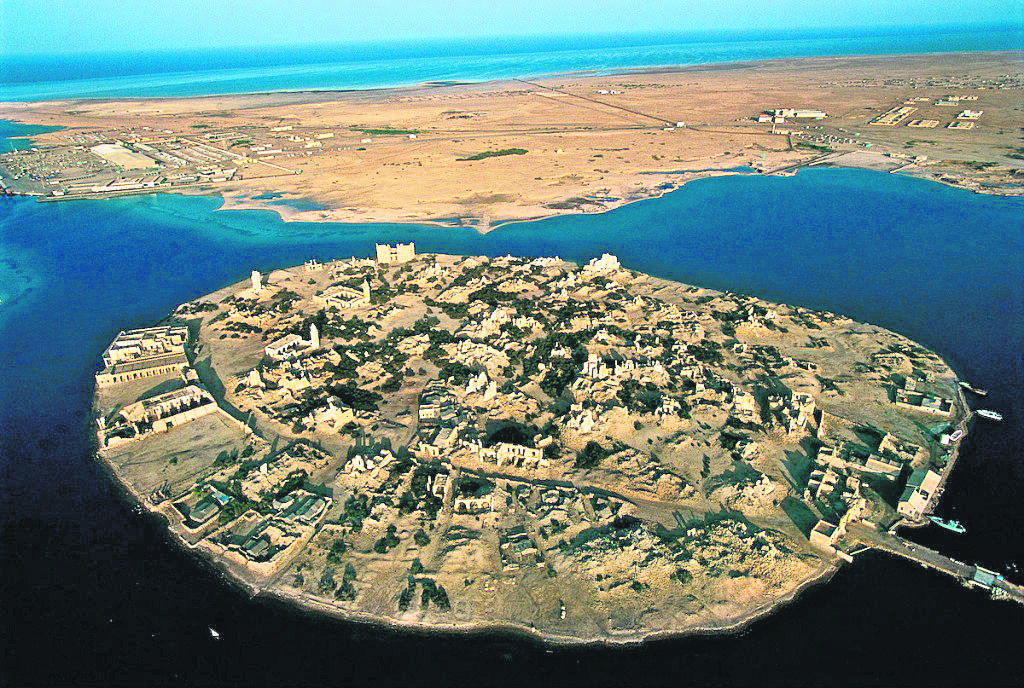 Suakin Island in Sudan is one of the hottest topics from the last few weeks after the island was handed over to Turkey by Sudanese officials, as the island was once under the Ottoman rule and prospered for four centuries as one of the most important ports in Africa

Suakin Island in Sudan was an important mercantile port of the Mamluks, who ruled over Egypt and Syria, on the west coast of the Red Sea. Having the upper hand on the seas starting from the early 15th century, the Portuguese gained dominance in the region, attacking Muslim reigns on the east and west coasts of Africa and destroying many places. In 1513, Suakin was captured by the Portuguese. The Ottoman Empire, which took over Syria and Egypt during the reign of Sultan Selim I, saved many regions in East Africa from Portuguese occupation, establishing dominance in the Red Sea.

Suakin was one of the busiest ports in the Red Sea. It offered a connection between Ethiopia and surrounding regions. The sea connection was also strong between Suakin and Jeddah.

It is not known when or how Suakin was taken over by the Ottoman Empire. Published by historian Uğur Demir, a report, which was written in the first half of the 16th century, describes Suakin in detail, while mentioning the ports on the Ethiopian coast.

A statesman named Ali Çelebi sent fellow statesman İshak Odabaşı to Sultan Mahmud, the ruler of Suakin, during the reign of Sultan Selim I and demanded he pay "ashar," a tax in the Ottoman Empire. However, the sultan responded: "I have no ashar debt." He later explained the reason why he refused to give this money. When Selim I ruled over Egypt, he sent an edict that said he did not want any goods other than khutbah and coins. He also said that the commercial wharf of the city belonged to Sharif of Mecca Berekat.

While the Ottomans gained power in the region, the Portuguese, who wanted to continue their dominance in the Red Sea, tried to build a fortress, sending soldiers to Suakin, but they could not succeed. After their attempt, Selman Reis wrote a report in 1525, claiming that if the Portuguese were successful in their attempt to build the castle, they could have hindered trade ships from India and dominated all the Red Sea and Bab el-Mandeb.

Ottoman statesman Özdemir Pasha, who was assigned to the region to put an end to the Portuguese threat, established the Ottoman Ethiopian region, which reached from Egypt to Mombasa and included a part of today's Sudan and Ethiopia along with some regions of Djibouti, Eritrea and Somali, in 1555. In his book, "The Ottoman Empire's Southern Politics: Ethiopian State," which was published among the editions of the Istanbul University Faculty of Letters in 1974, Cengiz Orhonlu tells the history of the Ottoman Empire in this region and Suakin in detail.

The governor of Ethiopia lived in Suakin, but when he moved to Massawa, Suakin was home to the deputy governor. Jeddah's sanjak bey ruled the ports of Suakin from the 18th century. The Sheikh al-Islam there was also the representative of surrounding tribes in the Ottoman administration. In addition, there was a dizdar as the ruler of the fortress. The qadi of the state lived in Suakin, as well. The city was protected against attacks with fortresses.

The people of Suakin dealt with trade, transferring goods from Africa to the Arabian Peninsula, and the goods that were taken to Africa from Egypt and India were transferred in Suakin.

These people were at every wharf of the Red Sea, and they also had a neighborhood in Jeddah.

Suakin was bringing in a huge amount of customs revenues since it was on the east-west trade route. Indian merchants bought gold dust and ivory from Suakin. Pearls were found there and off the surrounding islands. Some people in the city earned their livings by fishing, and Bedouins produced wicker.

Evliya Çelebi visited Suakin during one of his journeys to Egypt, Sudan, Ethiopia, Somali, Djibouti and Tanzania. He describes it under the title "The characteristics of old throne center Suakin."

"We stayed in this city for 12 days, merchandising with all people with camel trains. I sold 40 dromedaries in return for 500 piasters and also disburdened, sold 50 tusks for 500 piasters. Then we started to wander around the city. The Suez Sea is to the north of the island, and it takes 12 hours to reach Mecca from the island. Therefore, the direction of Mecca from this city is to the north. Suakin is a little island reaching three miles from east to west.

"Suakin has one of the thrones of Ethiopian pasha, but he is not a resident here. His district governor rules with 500 men and gives 100 pockets of crops to him a year. The palace of the pasha is called 'hurde' and taxes are collected here.

"The palace was built upon the orders of Özdemir Pasha. It is built of stone and therefore is solid.

All Indian, Sind, Yemeni and Ethiopian ships approach this palace and ashar is taken here.

There are total of 260 little houses built of stone, wicker, cane and wood dust on Suakin Island.

"Özdemir Pasha built a stone mosque with a low minaret. He also has some small mosques and nearly 20 shops made of brush and wickers.

"At the beginning of the wharf, there are vaults of the Banyan tribe, who are fire-worshipper heathens, and these vaults are full of precious goods.

"There are no other constructions such as soup kitchen, madrasahs, vineyards or orchards apart from these."

"On the southeast side of the island is land, the sounds of the call to prayer can be heard from the near side. There are three old towers there on the coast. They are close to each other and riffle-ranged. They built these towers in order to protect the water on this side. The towers are safe places for camel trains and passengers until they reach Suakin. If these towers did not exist, black tribes would not give even a drop of water to Suakin, and it would disappear because of drought. Therefore, they always protect the water on this side. There are some water cisterns in some houses.

"This is why these towers – the Main Fortress, Middle Fortress and Strait Fortress – are so prosperous. They have ships to carry water and various dizdars and 50 or 60 soldiers. Servants take their 'ulufe,' the wage given to the soldiers in the Ottoman Empire, from the pasha every month.

"These fortresses have some Ottoman cannonballs and armory."