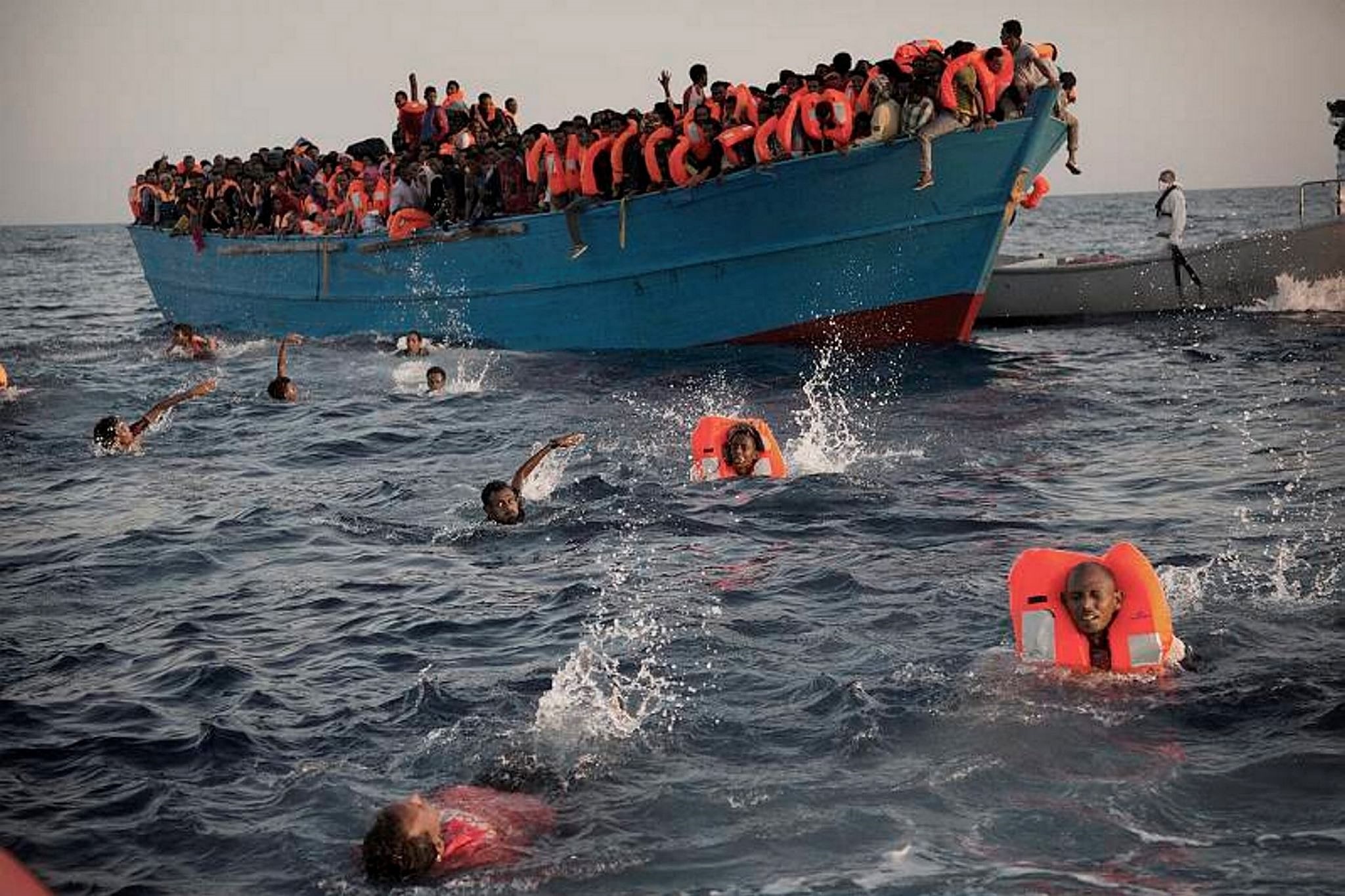 Migrants, mostly Eritrea, jump into the water from a crowded wooden boat as they are helped by members of an NGO during a rescue operation on the Mediterranean, about 21 kilometers north of Sabratha, Libya.
by Jane Louise Kandur
Jan 13, 2018 12:00 am

Yet another boat carrying people trying to leave Libya for a better life has sunk in the Mediterranean. People from Eritrea, Syria and Somalia, more than 1,000 people in total, died last year. The reasons they are trying to leave are clear - unrest in North Africa and the Middle East has led these people to think the risk is worth taking

To leave one's home, to abandon one's family for a new start in a new land is never an easy choice. To get up and walk away, not knowing if one will ever return is not an easy decision. The idea that immigrants from North Africa are pulled by the lure of roads paved in gold is downplaying the problem, oversimplifying it. To abandon all that one knows, to risk life and limb, to undertake a trek that is long and difficult, to board a small boat, which is overcrowded and cramped, to pay all your life's savings for these privileges, is not a decision taken lightly. More often than not, such a decision is taken due to a stronger drive than simply looking for a better life.

The instability that is prevalent throughout many countries in North Africa has driven people to flee. Not to migrate, but to flee, leaving behind their homes and loved ones. Economic factors of course play a role in this. But there are deeper reasons for the instability, as economic factors are often nothing more than the final straw.

This type of instability exists in many regions of the world, not just in Africa. It would be wrong to view this problem as an African problem. In the news this week there have also been news reports on problems in Venezuela, Brazil, Greece, Iraq, Syria. A more accurate summation of such problems would perhaps be that they are post-colonial problems.

But here, today, let's stay with North Africa. It is from here that immigrants are risking their lives to get to Europe, to what they think will be a better life. A better life as an illegal immigrant in Europe. That is how desperate these people are.

The migrants who cross the choppy waters of the winter Mediterranean usually come from countries like Eritrea, Somalia, Senegal, Mali or Libya itself. Yet this week alone, two more countries in North Africa are experiencing unrest due to economic factors. Now, both Sudan and Tunisia have witnessed unrest due to austerity measures and rising food prices. In neither country did the problem emerge overnight, but rather was the result of a process that has developed over the years.

The situation in Tunisia has been slowly brewing over the past few years. In April 2016 the International Monetary Fund (IMF) made an agreement to provide a $2.8 billion finance package to Tunisia, with the stipulation that economic reforms are carried out. The 2017 budget set out austerity measures, mainly aimed at reducing the central government debt from a very high 53 percent. This will only be possible if public sector hiring is frozen; there can no longer be any salary increases and the public sector wage bill has to be reduced. In addition, such measures must include raising taxes on private corporations.

The head of the government Youssef Chahed promised that the new government will make these tough decisions which will help the economy grow and which will help create jobs. He is responding to pressure from the IMF. This situation was clear in 2016, when Chahed told lawmakers: "If the situation continues like this then in 2017 we will need a policy of austerity, and dismiss thousands of public sector employees and impose new taxes."

Of course, at this time the proposal of such a move was not popular. There were threats of general strikes. The government backed down. And then the IMF halted disbursement of the second tranche of the loan.

This is the problem when there is huge public debt and a young democracy. The IMF is not interested in democracy. Reform measures must be carried out if the IMF is to continue to fund a country. The Tunisian government has found itself in a very difficult position. It needs the IMF loan to extricate itself from the huge public debt. But it needs time and room to negotiate with the trade unions and other interested parties.

Politicians everywhere have to make unpopular decisions. They have to balance victory in the ballot box over proper governance. None of this is news in Tunisia. In 2016, there more than 8,000 protests, demonstrations, sit-ins and strikes.

The latest unrest happened last week, with more than 200 people being arrested, many injured and one death. There was great damage to property with acts of violence and ransacking.

Young people have taken to the streets, throwing rocks at security forces. More than 20 Tunisian cities were affected by the protests.

Tunisia is seen as the sole nation to emerge successfully from the Arab Spring, making a gradual transition to greater democracy. But it is a fragile democracy that can easily fall apart.

It is interesting that the main opposition party is calling for continued protests against unjust government austerity measures. The leader of the opposition Popular Front party, Hamma Hammami, told reporters that the different opposition groups would meet to "coordinate our movements". Yet, the austerity measures that were passed in the budget were passed by a majority of the parliament. They were not snuck in the back door.

The problem is that the Tunisian government has to do something that will be unpopular with the middle classes. This is when governments fall. It is a dangerous situation when it becomes the norm to protest, demonstrate and riot in the hopes of overturning the government. Democracy in countries like Tunisia needs to be supported. Rather than IMF loans, there is a need for new investment, the creation of jobs, the ability to create an export market, the reopening of the severely damaged Tunisian tourist industry - this is the kind of help Tunisia needs. Real democracy can only exist in a real economy. Any economy shored up by loans and handouts will only damage any kind of democracy that exists.

Although many protestors are saying that they are demonstrating in an attempt to get the government to do something, the point being missed is that the government has done something, and is trying to continue to do something. The four-year loan program from the IMF requires economic reforms. And that is the government's program. But these measures directly hit the middle class. Protests are normal, are to be expected. The violence that has erupted throughout the country speaks volumes. When protests turn violent, it is not usually the working class behind them. The working class is not interested in destroying public or private property. They are interested in jobs, food and shelter. And yet, the protests in Tunisia have targeted banks, stores, national security headquarters and police stations.

In Sudan the situation is similar, yet different. When Sudan removed a subsidy on wheat imports last week, something that has been discussed for over a year, a hike in the price of bread followed. The subsidy was removed to help liberalize wheat imports. Wheat prices are globally low, and this will help save money - in the long run - on wheat imports. The subsidy will save the Sudanese government nearly $500 million. Now the way has been opened for private companies to import wheat.

Bread prices rose quickly because there was a shortage of wheat in certain regions of the country. But it is hoped that prices will stabilize quickly. The rapid doubling of bread prices led to the protests. The opposition called for peaceful protests, and crowds gathered.

In the Sudan it is the poor who are out on the street. They cannot afford the new bread prices. Demonstrators turned out, they set light to tires and blocked roads. The police fired tear gas. One student died and six other people were injured. But things in the Sudan have quickly calmed down.

Protests over rising prices, over high unemployment, over the distribution of resources are one way in which democracies function. But it is important to examine who the protestors are. Are they the working class, out struggling to make their voices heard, in an effort to have foodstuffs sold at a price they can afford? That is, are they demanding affordable bread? Or is it the middle classes demonstrating against a perceived threat to their privileges, to a perceived threat to a status quo that benefits them? Are the people on the street spurred on by outside influences, or are they really those who need greater support?

When it comes to the question of the economy of North Africa, the aid that these countries need to stabilize and to help democracy flourish does not consist of loans from international institutions. They do not need generous donations. What they need and what they deserve is investment. They deserve investment in their people, in their countries. Industries, factories, jobs need to be created. Then no more will they try to flee across borders or seas. They will stay in a land that is home, stay with their families, enjoying the life they always dreamed of. If the people are given employment and security in their own lands, they will not become the new disenfranchised, marginalized minority of Europe. The infrastructures of many countries have been destroyed be colonialism. Grand schemes of loans will do nothing to help these countries recover. And they will do nothing to stop the boats from coming to European shores, overladen with desperate people seeking a way out.

What the people of these countries need are livable wages and affordable prices. They want a reasonable life. What we want is to live in a world where they are not really asking for something that is not impossible, where they are not demanding too much.