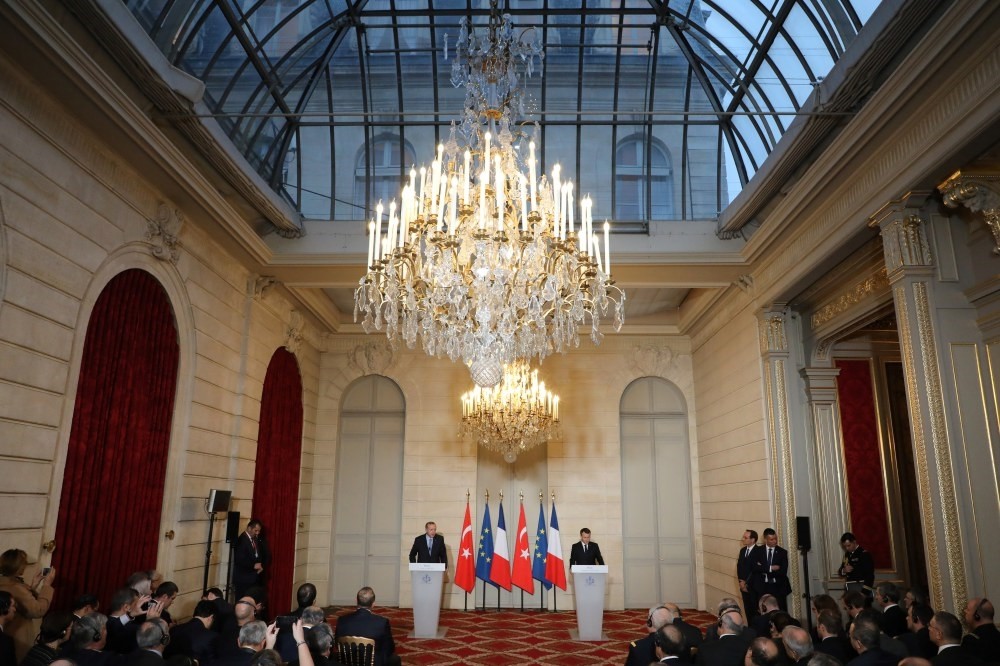 Blinded by an anti-Erdoğan agenda, some French media outlets that covered the president's recent visit to Paris, crossed the ethical lines of journalism, the most obvious example of which was the cue card fiasco

French sociologist Pierre Bourdieu, a rare intellectual who went far beyond his time, could offer a new set of glasses to French media outlets that seem to have dropped theirs in a rush to pursue anti-Erdoğanism. The second most frequently quoted author in the world, Bourdieu wrote a relatively short yet dense book, among many of his other successful works, titled, "On Television," which became a bestseller as soon as it was published in 1996. Handling the effects of media, more specifically the television, on social and, more importantly, political life, the book may serve as a reminder to his compatriot journalists, particularly the biased ones, in their methods of covering news related to President Recep Tayyip Erdoğan.

Michel Scott, Senior International Correspondent of French TV Channel TF1, jointly with LCI, hosted President Erdoğan for an exclusive interview during his visit to France in the first week of the new year, which was the initial leg of his comprehensive tour to European countries this year. All seemed normal in general with Scott asking the president presumable questions in a presumable way regarding more than a few issues including Turkish-French relations, the refugee issue, the fight against terrorism and the developments in the Middle East, with the July 15 coup attempt in 2016 and the state of emergency in Turkey as the headlining topics. During the one-on-one interview, however, the moments when Erdoğan's adviser showed him a cue card was more telling than the whole interview, and this is exactly where Bourdieu's ideas can serve as an advice.

The deliberate broadcast of the moment when the adviser wrote on the cue card for the president to say, "justice requires punishing the guilty," is first and foremost against the ethical standards of reporting, since it will channel the audience into a bias against Erdoğan: A world power like Erdoğan is told what to say even while an interview. But the audience should know that as Bourdieu once forewarned both them and journalists, "television, which claims to record reality, creates it instead." Most of the French media, if not all, creates an anti-Erdoğan reality, as proven further when the same scenes were used later at the French news channel LCI when Scott was evaluating his exclusive interview with Erdoğan.

Let's assume that broadcasting the cue card scene for the first time was an accident. But how about televising it for the second time on another program? It was nothing but a big no-no. Bourdieu was once again right when he said a few years earlier, "They [referring to TV broadcasters] show things and make people believe in what they show. This power to show is also a power to mobilize. It can give a life to ideas or images, but also to groups." In the same wise, the TF1 and LCI joined the convoy of anti-Erdoğanism, even at the expense of overlooking the codes of journalism.

For those, who are immediately convinced by deliberate manipulation of the TF1/LCI interview, believing that a leader should not resort to any adviser to say a word, the bad news is, in the age of technology, there is almost no single politician who does not use teleprompters, if not cue cards. Former U.S. President Barack Obama, for instance, was among leaders who used the teleprompter most, and in fact, he was really good at it. Once, however, he was in the line of fire by many after he was pictured with teleprompters while introducing his "Race to the Top" program during an event at Graham Road Elementary School in Falls Church, Virginia, on Jan. 19, 2010.

A number of people, not just the critics, mockingly criticized him, arguing that it is a pity the president of the United States of America was not able to leave the White House without "his trusty glass" even to talk to the children. What's more, things got so serious in the wake of such criticisms that the White House made a statement to the American magazine Weekly Standard, saying Obama used teleprompters only to address the press during a conference followed by the program with sixth-grader students. Do you know why? Why was it necessary for the White House to make a statement for such a "trivial" detail? The answer is simple, and also valid for President Erdoğan's case: Everyone may not realize that teleprompters or cue cards are merely devices for performance. Given that image has vital importance for world leaders, they cannot risk it with some mistakes such as a slip of the tongue, losing their train of thought, or leaving questions unmarked. Therefore, they simply use it.

Leaving the TV aside, before and after President Erdoğan's one-day visit to France, some of the leading French newspapers and news magazines, very much expectedly, articulated their anti-Erdoğanism in several articles. An article by Etienne Girard titled, "Turkish example: How to silence media by showing threat as an excuse," published in Marianne – a weekly magazine – on Jan. 5, for instance, rang the alarm bells for the coming of "an authoritarian regime" in Turkey, and in a way warned whoever is concerned. Daily newspaper Liberation's Celian Mace was no different than her colleague from Girard, as he committed himself to be the bearer of bad news in the article titled, "Erdoğan could not hide his nature in Paris," as he referred to an obsession of "authoritarianism," guess for whom? The same day saw similar depictions this time from Marc Semo of Le Monde newspaper, on which the article "Erdoğan wants to get free from isolation" portrays President Erdoğan as "a lonely power" and adds that "Turkish middle class living in rural areas are getting more concerned over him exerting authority," with no references or sources, let alone rationalizations, pointed.

Wait folks, we can very well adapt Bourdieu's argument "Television enjoys a de facto monopoly on what goes into the heads of a significant part of the population and what they think," to the French press media right at this point. It just so happens that a range of mainstream newspapers and magazines, and some others whose names will come a few sentences later, attempt to make readers see Erdoğan as nothing other than a sultan, a despot, luxury-loving tyrant, very much identical to the manipulations of television journalism. The Jan. 6 article by Le Figaro's Georges Malbrunot, "Macron locked Erdoğan out of European Union's door," does nothing other than portray Turkey's president as an "intervening" leader. But Adrien Lelievre from Les Echos newspaper took the portrayal pretty much further in the Jan. 5 article titled, "Erdoğan, an invited sultan to the gilded Elysee Palace." He thinks "Erdoğan will possibly come to Elysee Palace again since he dreams to stay in power forever." For Lelievre, the "angry sultan" would even find the 365-room French palace too small as his "Neo-Seljukian palace in Ankara has 1150 rooms."

Yes Lelievre, don't worry, your message has been delivered to the right ears and, from now on, all readers will think President Erdoğan has all those rooms for fun. What a story! It is ironic that there is nearly no noteworthy information provided in those articles, and yet, what President Erdoğan wrote for Le Figaro during his pivotal visit was more informative with the mention of a new nuclear deal between Turkey and France, the French government's fight against Islamophobia across Europe, the joint Turkish-French stance against PKK and Daesh terrorists.From the cue card fiasco to the press' negative framing, French media seems to have failed a test of professionalism and ethics for the sake of tarnishing President Erdoğan's image during his Paris visit. Such a smear campaign, however, is obviously to nobody's advantage. Quite the contrary, it will lead the president as well as senior bureaucrats and key figures, who attach pivotal importance to ethics, to think twice while giving an interview to a French media outlet.