Justice for everyone: The Ottoman judicial system

Justice was one of the building blocks of the Ottoman Empire and the practitioners of justice were just to everybody, from sultan to beggar, without exception

The founder of the Ottoman dynasty and empire, Osman I, appointed Dursun Fakih as the qadi of Karacahisar after its conquest. Therefore, Dursun Fakih was the first qadi, or judge, in Ottoman history. The qadi represented law and administrative organization.

Justice, the foundation of the state

Justice was important in the Ottoman Empire and was believed to be the foundation of the entire system. Therefore, qadis independently carried out their duties. No one could be punished without the provision of a qadi and no registration or tax collection could be done without his involvement.

Even sultans could not interfere in the courts or qadis. If needed, the courts asserted the public against the sultan. Laws were above the sultan. For example, the sheikh al-Islam, the supreme judge and highest official, Ebussuud Efendi, objected the orders of the sultan, reportedly saying, "If the customary law goes against ecclesiastical law, even the sultan's orders aren't valid."

No segregation in court

Ottoman courts did not segregate people between rich and poor, weak and strong or Muslim and non-Muslim. Status or reputation was not important. A non-Muslim could sue a Muslim, and if he or she was right, he or she would get a fair shake.

For example, Bartholomaeus Georgieviç, who stayed in the Ottoman Empire as a captive in the 16th century, said, "The judges of Turks and Christians are the same. Muslim judges offer the same justice to everyone without any discrimination. The one who killed is killed, the one who stole or took something by force is executed by hanging. The same rule is enforced for a janissary who drank a cup of milk of a woman in the bazaar and does not pay for it. I witnessed it in Damascus."Having come to the Ottoman Empire in the first quarter of the 17th century, Adam Werner, while talking about the power sources of the Empire, said, "The experienced and informed people in this matter are respected and awarded if they behave honestly and determinedly. They can be appointed to the highest political and military ranks, can be rich like kings and dukes and even can enter the family of the sultan by marriage no matter whether they are slaves or lower class people. And, the punishments for the perpetrators, regardless of their classes, are really heavy and can lead to execution. They apply strict rules."

Punishment for governor who pressured qadi 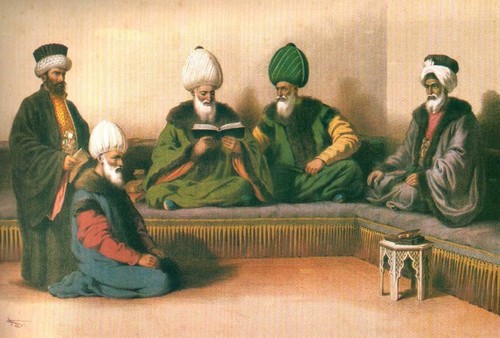 A painting of an Ottoman qadi during an investigation.

Faik Beg, from the Turhanoğulları, a famous raider family, was appointed governor of Rumelia by the grand vizier in return for his service to the empire.

However, the six months in Sofia during his tenure was far away from justice. After executing some people without court involvement, he put pressure on the qadi of Sofia, Sencarî Muizüddin Mehmed Efendi, to decide in his favor. The qadi set off for Constantinople after this. After telling everything at the Imperial Council, he presented what the governor did as a document. Thereupon, Mirahur Osman Pasha was appointed as the governor of Sofia and Faik Pasha was discharged. The qadi of Sofia also resigned.

The chief warden of the palace gates, Kapıcıbaşı Şehbaz Agha, captured Faik Pasha and brought him back to Constantinople. Even though Faik Pasha was wealthy, he tyrannized the people. Some say that he smeared the name of his forefathers with his actions.

Faik Pasha was previously punished due to his tyrannical behavior, but once he became a beylerbeyi (governor), his arrogance multiplied and he continued to torture his subjects despite his old age.

At first, Faik Pasha denied all the allegations against him and claimed that the qadi was tyrannizing the people and begged the sultan to question his predecessor, Dilaver Beg. Once Dilaver Beg was questioned, it turned out that the qadi was one of the most respectable men in the region and the truth was revealed about Faik Pasha and his tyranny. Once everything settled down, the court found Faik Pasha guilty of torturing the people for the last 30 years and sentenced him to death.