Wellness fountains: Turkey's springs a cure for all 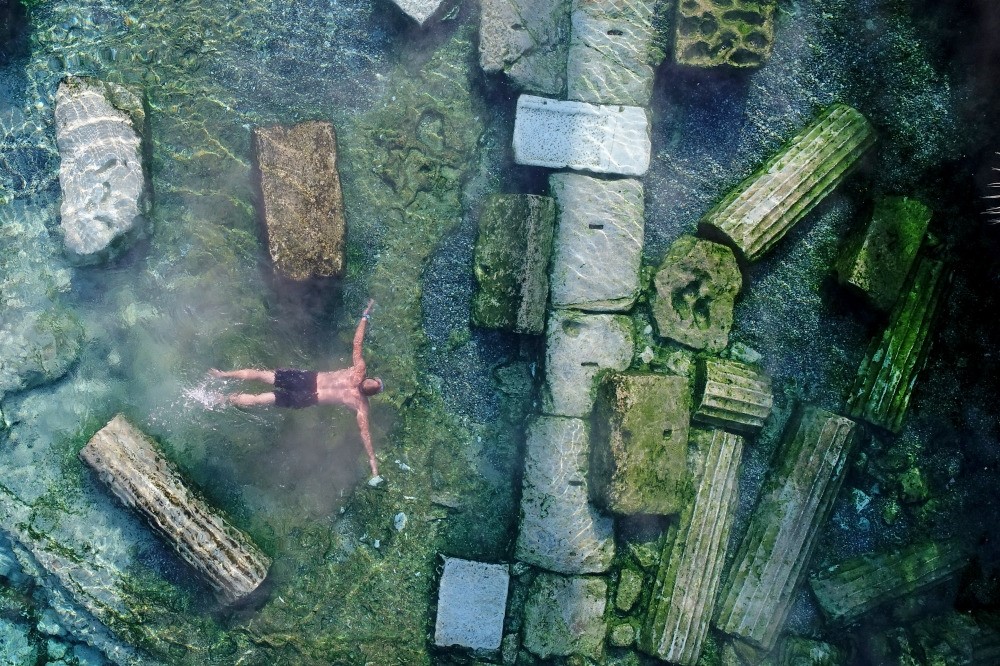 The healing waters of Pamukkale have been used as a treatment center since the ancient times. Tourists are able to swim in the pools in which lie in the remains of the ancient city of Hierapolis.
by Daily Sabah with AA Jan 20, 2018 12:00 am

Skiing is the first choice for many during the winter holidays, but this year, take a dip in Turkey's miracle thermal springs that have offered cures to people since the ancient times

Blessed with numerous natural wonders, Turkey certainly is a rich country when it comes to hot springs and healing waters. Since the time of the ancients, the hot springs of Anatolia have been a draw to the locals as well as others from neighboring states and even some civilizations that thrived and found glory in the pages of history.

Now, Turkey has taken over the tradition and become one of leading countries in health tourism thanks to its more than 1,000 springs. Once holiday spots for the elderly looking for remedies, the springs in Turkey have become a fun holiday choice for almost every age group.

With one of the world's best climates, wonderful nature and one of the healthiest diets, Turkey is the ideal destination for psychological and physical rejuvenation. This winter, leave the cold weather behind you and renew yourself both body and soul in the healing waters of Anatolia.

Heal with the waters of the Aegean

Western İzmir province, which has many local and international visitors with its large number of seaside hotels in the summer, also draws attention due to its thermal waters.

In particular, Çeşme, a popular resort town, provides relief for those suffering from different types of diseases with its thermal water from the sea. Its thermal history dates backs to 3,000 B.C., and it was an important thermal destination in the Ottoman era, especially in the 18th and 19th centuries.

Luxury hotels in Çeşme bring thermal water from the sea, which is filled with rich minerals, such as calcium, magnesium-hydrogen-carbonates and sulfates.

According to hotel officials, some health problems the thermal water can provide relief for are post-traumatic treatments, rheumatic diseases and dermatological issues.

Speaking to Anadolu Agency, Ilgaz Nacakoğlu, manager of the Thermal and Thalasso Cure Center of the Altinyunus Resort and Thermal Hotel said they use thermal water at their facilities coming from the sea. The high salt concentration in thermal water is important for healing musculoskeletal disorders, Nacakoğlu said, adding iodine also prevents infectious diseases.

Balçova Thermal Hotel, affiliated with the Governorship of İzmir, is another well-known hotel in Balçova, hosting many visitors from northern European countries and Russia. It is known for its treatments: special therapy and treatment sessions for neurological and orthopedic diseases and for traumas after traffic and sports accidents and injuries.

National team players and other professional sports people are interested in the hotel.

The white paradise of Pamukkale, a UNESCO World Heritage Site, offers unique wellness treatment opportunities with its antique hot springs and mineral-rich thermal pools. Located in the southwestern province of Denizli, Pamukkale, which stands over the ruins of the ancient city of Hierapolis, has been known as a spa town and thermal treatment center for millennia and is especially famous for its white limestone travertines, shaped by calcium-rich hot springs.

A natural spring, situated in close proximity to the white terraces of travertine, is particularly popular with tourists. Dating from ancient Hierapolis, this pool formed naturally after the collapse of a series of columns in an earthquake in 692 A.D., which caused thermal water to accumulate.

With water temperature fixed at 36 degrees Celsius regardless of the season, the pool offers visitors a unique experience. It is believed to have healing benefits for cardiovascular diseases, rheumatism, skin and nerve diseases as well as intestinal disorders if it is drunk.The Karahayit region, also known as a city of thermal cures, is the most popular destination for cure-seekers in Pamukkale. The unusual red water of the Karahayit thermal pool, which remains at an average of 60 degrees Celsius all year round, wells up from beneath the calcite rocks and is rich in iron. This red water is believed to help those with rheumatism, asthma, bronchitis, and skin diseases.

Discover the miracle of waters in Nevşehir

The medical miracles of hot water springs in central Turkey heal dozens every day. The springs in the Kozaklı district of Nevşehir province, located an hour's drive from Cappadocia, have treated rheumatism, muscle and joint pain and even psychological disorders, according to folklore.

"People who come on a stretcher leave on foot," district Mayor Celalettin Güven said. "[Kozaklı] is where patients benefit the most from the hot springs," he added.

The 93 degree Celsius water has sodium, calcium and chlorine reserves and contains radon gas, which has therapeutic properties. Locals call the springs youth elixir due to their healing powers.

"Our guests come to our district to benefit from both thermal facilities and sports, and if they want to go out of the hotel, they can walk on the hiking trails and have a pleasant rest," the mayor said.

Kozaklı seeks to become a leading health tourism center in the country. Its location, 68 kilometers (42 miles) north of Cappadocia and 116 kilometers northwest of the Erciyes Ski Resorts in Kayseri, gives it an edge.

Known as one of the most crowded cities in the world, Istanbul offers an escape from the stress and rush of daily life with its thermal springs

The Esenyurt Municipality Thermal and Cure Treatment Center has been providing services for the last two years.

Esenyurt's thermal spring has a natural temperature of 36 degrees and total minerals of 4,527 milligrams per liter due to its thermos-mineral water.

Ayşe Eşref, the hydrochemistry expert in the municipality, said that the mineral content of the thermal is about 4 grams and is rich in sulfur, sodium chloride, fluoride and bicarbonate.

Eşref said that nearly 400 patients could be treated daily by the thermals, including bath treatment, mud and massage treatment, Turkish baths and saunas.

The thermal springs in Tuzla, also called Tuzla Kaplıcaları, which have attracted visitors for over 25 years from around the world, were mentioned by the Ottoman explorer Evliya Çelebi in his famous "book of travel." The thermal springs are known for strengthening the immune system with minerals such as magnesium, potassium, sulfate, bicarbonate, sodium and sodium chloride.