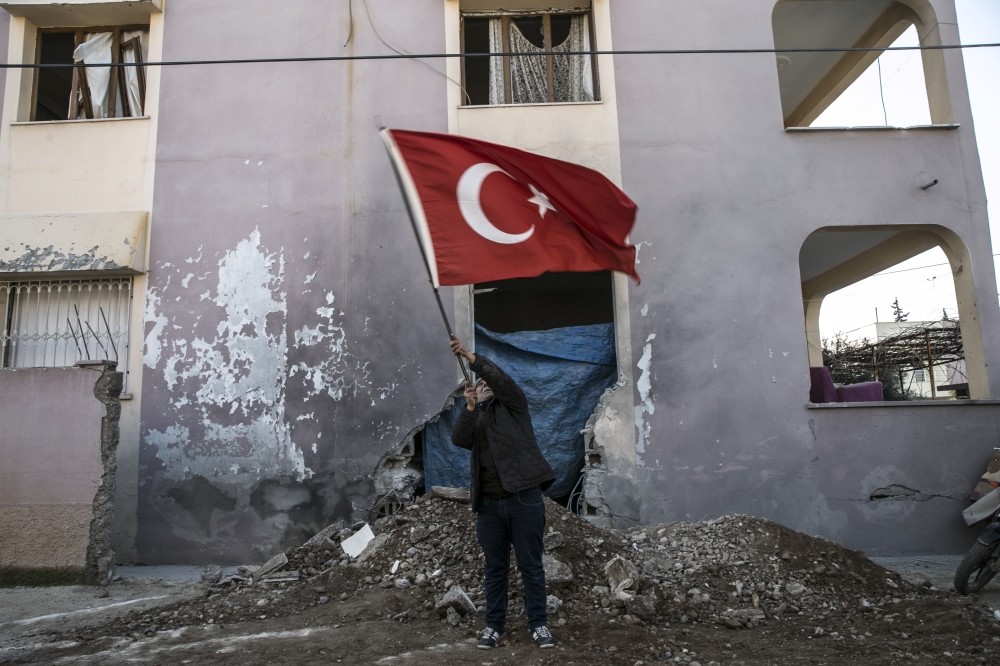 An elderly man waves a Turkish flag in front of a building that was damaged in one of the many PKK/YPG attacks in the region.
by Ayşe Betül Bal Feb 07, 2018 12:00 am

People in Hatay's Reyhanlı district are the direct targets of the PKK/YPG's cross-border attacks, yet they have no intention of leaving their land and waiting for their borders to be secured

Moments before the rocket fell, the residents of the Gültepe neighborhood of Reyhanlı in southern Hatay province, had clearly understood what was about to happen. The sound of the approaching missile was another attack by the terrorists across the border, namely the People's Protection Units (YPG), the Syrian wing of the PKK, which is recognized as a terrorist group by Turkey, the U.S. and EU. The people of Reyhanlı, right on the border with Syria, are no strangers to feeling the repercussions of what is happening in the neighboring country.

On May 11, 2013, two separate terrorist attacks killed 52 people and injured another 146. They are now being targeted by the PKK and its Syrian affiliate because of Operation Olive Branch, launched on Jan. 20. As the Turkish military pushes the militants back, terrorists start searching for easier targets. Being exposed to constant danger makes it no easier when it finally comes. There is no way to get used to such danger created by a brutal terrorist organization, physically or psychologically.

The sound of the missile generated a range of emotions among a range of people. Mothers grabbed their children, people told each other to get in the house or get out of the house.

When they hear a missile approach, locals go to enclosed spaces to protect themselves from falling debris from explosions.

A crowd was gathered on Feb. 1 as people had come together to recite the Quran after someone had died – a tradition practiced to pray for the one who has died and offer condolences to their relatives. They had gathered that day for Fatma Avlar, the 17 year old who was killed in her sleep the day before on Jan. 31, 2018, in a YPG rocket attack.

The U.S. continues to claim that the group they are supporting is the Syrian Democratic Forces (SDF), not YPG militants, which constitute the majority of the SDF's armed personnel, and that their target is Daesh. Turkey knows the facts on the ground that the SDF is nothing but a umbrella organization to hide the YPG's PKK terrorists who the U.S. cannot legally support.

"On the day of the incident, she was not sleeping in her bed, but in the living room with me," her sister, İdal Avlar, 14, told Daily Sabah, "Close to morning, before my father left for work, he woke me up and told me to wake my sister up so we could both go to our beds. I went to bed but she stayed. The next thing we heard was the sound, waking up in terror I saw my older sister fatally injured in the stomach, not breathing properly. I think we called an ambulance or someone else called it, I can't remember exactly."

At first, one can think that, Fatma Avlar, a young girl with goals such as going to university, like most of her peers, would have been alive if she had gone to bed. It is natural at times like these for people to go between blaming themselves and muse over probabilities and questions of what if.

Maybe one of the first things her father thought when he received the heartbreaking news was that it could have been different if he woke his daughter up and made her go to her bed. Would she still be alive? Or perhaps he could not even remember what the last thing he said to her was before he left home. Maybe he could not think at all, traumatized by the situation. After all, it was not about where she slept. It is neither about what she was doing at the time the rocket hit her home nor what people do in order to protect themselves in that border town. Such thoughts could only be directed by those who are either naïve or unfamiliar with PKK and YPG terrorism, which targets civilians, especially after the Turkish military launched the operation to clear its border in Syria's Afrin region, where the Democratic Union Party (PYD) has declared an autonomous administration.

Fatma, one of five siblings, had written in a recent message to her friends that she had dreams of going to university after graduating from high school. She asked them why they were all fed up with their lives. She was not fed up with her life, she was indeed a girl full of life according to her relatives. "She was a kind person with a good nature," said her cousin, Edanur Avlar, 17. "She didn't cause trouble over anything. She was saving money to go İzmir, a city in western Turkey. She wanted to study psychology at Ege University there."

Her dreams and life were cut short by YPG terrorism while her good but agonizing memory remains. Her aunt, Güldane Avlar, described her as an angel, saying: "Now she became a real angel and left. She had no harm to anyone. Words do not suffice to describe her kind-hearted personality."

Her cousin, Edanur, also mentioned Fatma's fears: "She was afraid of the sounds and the situation here. She asked her father to move from Reyhanlı. The day before the incident happened they came to our house in the center of Hatay, away from border."

This fear is a daily reality for every person in the border town. It is written all over their faces. Mothers grab their children at almost every sound because they are on edge from the rockets that come splitting the air with a terrifying sound that only those who are exposed to them in their everyday life can grasp.

They are no rocket scientists, but almost everyone can tell from the sound of a missile where it is coming from and approximately where it will land. In an atmosphere like this, one of the most important things that catches one's attention is that these are brave people regardless of their age.

Another of Fatma's cousins, Ela Avlar, 14, said: "We are afraid of living in these circumstances. We have no life security since our homes are just across the area [from the YPG]. But people here will not leave their homes. We are not leaving, only a few who have very young children, who have babies have left. We trust Turkish soldiers to clear the area and bring an end to this terrorism."

Ela, a young girl who should normally be concerned about school, spoke of the necessity of an operation against YPG terrorism, and she is not alone.

A taxi driver who started to work at his father's business after he graduated from university said: "The situation here now needs the utmost attention. People are even afraid to go visit their relatives in Reyhanlı due to terrorism threats. But we have trust in the military. I know that they want to put an end to this suffering."

Reyhanlı is one of several towns that have been attacked by terrorist since the operation in Syria began. Another is Kilis. The YPG has already hit a restaurant, a mosque and several homes – all civilian areas.

On Feb. 1, people had gathered to recite the Quran, children who were taken into houses by their mothers earlier started to play outside again a few minutes after it was found that the rocket landed in a cemetery. They started to smile again, even though their smiles were quite bitter because of their fears, regardless of what they understood or which parts were explained to them by their parents, forgetting the situation for a while, probably like any other day like this. After all, they are children, some of whom do not even have the capability to realize the difference between life and death even though it makes no discrimination.