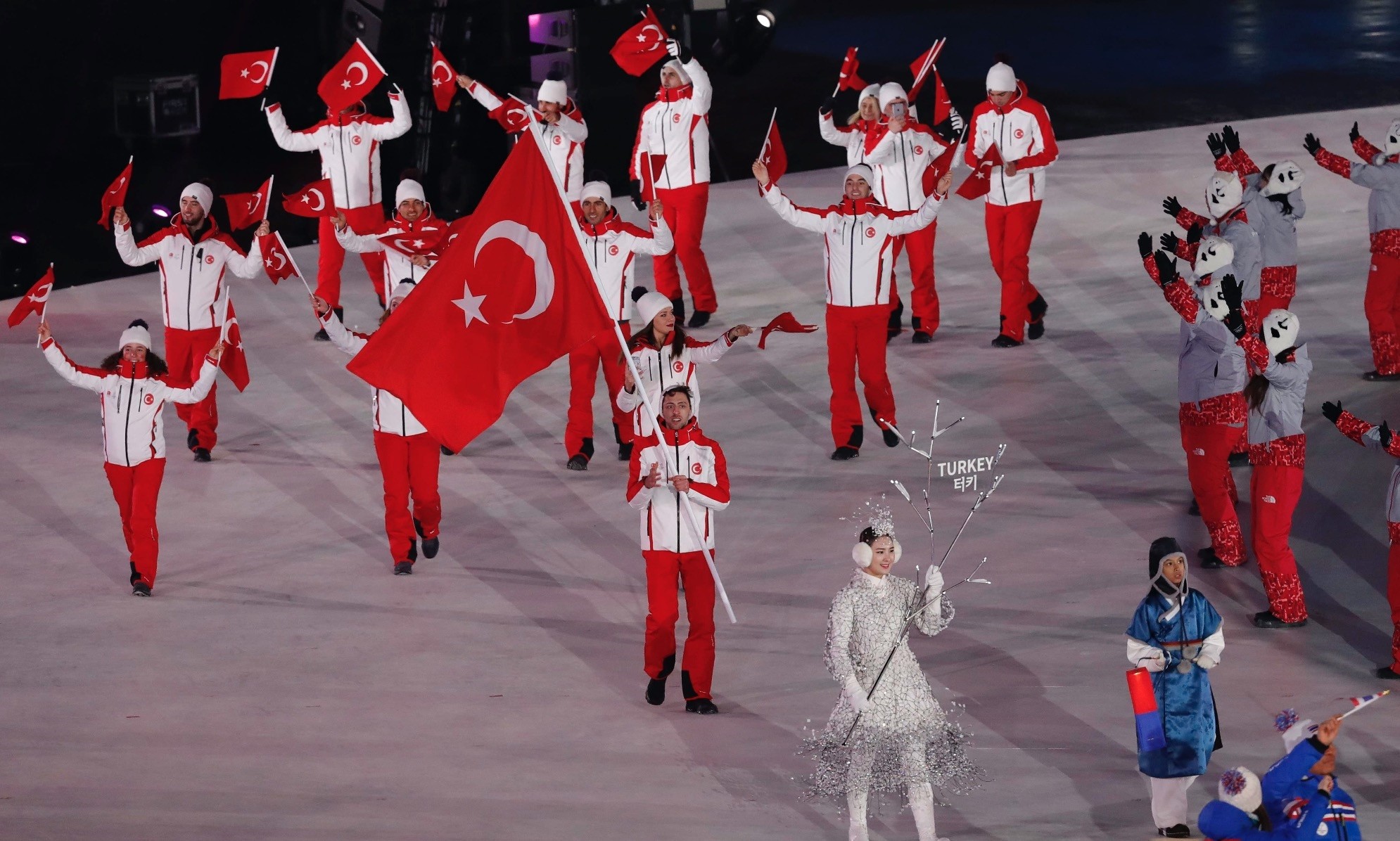 Turkish National ski jumper Fatih Arda u0130pciou011flu carries the national flag during the parade at the opening ceremony of the Pyeongchang 2018 Winter Olympics on Feb.9.
by Mehmet Ali Söylet Feb 14, 2018 12:00 am

Turkish athletes have been joining their fellow competitors in the Winter Olympics for the last 88 years. Although they have returned home empty handed in each of those years, they never gave up hope and this time they have a real chance of making history

The 23rd Winter Olympics kicked off Friday night with an opening ceremony held in Pyeongchang, South Korea. The Winter Olympics is one of the most important sporting events in the world, taking place every four years, except during World War II, with the first event held in Chamonix, France in 1924, and attracting sports lovers from all over the world. The Winter Olympics is a very unique organization that has a natural advantage in winter sports, with plenty of cold, snow and ice, thus allowing athletes from all over the world to exhibit their talent and performance apart from the countries where winter sports are quite popular.

On a different note, it should be emphasized that the medals and achievements in the Winter Olympics are not like other sport organizations due to the striking advantage of countries that have a geographical advantage. Norway's clear superiority cannot go unnoticed in this regard. At this point, Turkey's participation in the Winter Olympics that has yet to be successful, but the country is still looking to the future. Turkey has yet to warm up to winter sports, except for the well-intended attempts and individual efforts.

Turkey joined the Olympic Winter Games for the first time in 1936 in Garmisch-Partenkirchen, Germany. Participating in the event with only six male athletes, Turkey competed in only two branches at the time. Nazım Aslanboğa, Ülker Pamir, Mahmut Şevket Karman, Reşat Erceş, Sadri Erkılıç and Cemal Tiğin made history in this regard. However, it was interesting that four athletes participating in the Alpine Skiing branch did not start or finish the race either, so they could not get any ranking.

Among the four athletes who took a chance in the 18 kilometer cross country skiing competition, Mahmut Şevket Karman was the only one able to complete the race, coming in 72nd and last, about 25 minutes after the nearest competitor finishing the race at 2:09:36. Also, in the 10KM Relay 4 X Men's race, Turkey was the only country among the 16 competing that failed to complete the race. In the end, only one athlete managed to complete a race from the six athletes who participated in three races in two branches. This interesting journey, which started with a group of well-intended athletes, did not improve much.

The next Olympics were held in 1948 due to the disruption of World War II. Turkey participated in the 1948 Olympics in the Alpine Skiing Downhill category with four male athletes. One of them failed to finish the race, while Rachid Tolun, who was the most successful, came in 87th among 111 athletes. Obviously, it can be argued that three athletes should have at least one result by finishing the race compared to the first Olympics. Having skipped the event in 1952, Turkey again competed in the Alpine Skiing branch in 1956 with six male athletes, but there was no considerable success. Turkey, which sent two male athletes to participate in the Olympics held in Squaw Walley, United States in 1960 to compete in the Alpine Skiing Downhill branch, seemed to have reached a certain stability in the Winter Olympics after one of its athletes managed to finish one race and came in 58th among 61 athletes, but this small step was unfortunately not a success. The Winter Olympics' return to Europe in 1964 was held in Innsbruck, Switzerland, and Turkey was represented by five male athletes. Nothing was surprising for those who knew about the previous Olympics.

Turkey made history in the Olympics held in Grenoble, France in 1968, by sending the biggest team. Turkey, which participated in the event with 12 male athletes, competed in the Alpine Skiing and Cross Country Skiing categories only, and were not particularly successful. Having dared to participate in the 4x10 km Relay for the first time after its first attempt in the 1936 Olympics, Turkey repeated its first result by coming last among 15 countries. Yet, this time they actually finished the race, so that could be considered an improvement. Turkey could not afford to send athletes to the 1972 Olympics, which was held this time in Japan, because the country was going through a serious political and economic crisis.

Nine athletes went to Innsbruck in 1976, but there were no changes in the results. As 1980 was one of the darkest years in the history of Turkey, it was unable to send athletes to the Olympics held in the United States. The 1984 Olympics came to Sarajevo, right under Turkey's nose. On top of that, Turkey participated in the Winter Olympics with seven male athletes and maintained its stability in category and result. Having participated in the Olympics held in Calgary, Canada in 1988 with eight male athletes, Turkey later sent eight athletes to Albertville in 1992 as well.

Having sent only one athlete to both the 1994 Lillehammer and the 1998 Nagano Olympics, a long-awaited first was in store for Turkey in 2002 in Salt Lake. Turkey, which sent its first female athletes to the Summer Olympics in 1936, waited exactly 66 years to send female athletes to the Winter Olympics. Kelime Aydın Çetinkaya marked this historic first. Çetinkaya competed in Cross Country Skiing, and although she did not win any medals, she made history. Turkey had to wait for the 2006 Torino Olympics for another first. Tuğba Karademir was the first athlete representing Turkey in Figure Skating, a category other than skiing in Winter Olympics. The average did not change in the following two Olympics events. Turkey attended the 2010 Vancouver Olympics with five athletes and the 2014 Sochi Olympics with six athletes. This year, eight athletes will represent Turkey in South Korea.

While an average of 50 athletes have represented Turkey in the Summer Olympics throughout history, the country remained at an average of six athletes in the Winter Olympics, and it did not participate in eight Olympics events. Having made a name for itself and always managing to be among the forerunners of the Summer Olympics, Turkey has failed to win any medals in the Winter Olympics so far. Among the licensed and active athletes in Turkey, the rate of those interested in winter sports, namely skiing, skating, ice hockey and luge, is merely 1.3 percent. In other branches, like curling, there are not enough qualified athletes to form a team. The main reasons are low sponsor support and financial insufficiency, which have always been problems in other sports. It becomes much more difficult to find a sponsor if there is little interest in winter sports.

Another great reason why winter sports cannot develop in Turkey is the lack of facilities. For instance, there are only six ice-skating facilities available to train athletes. The first facilities for ski-related branches were built for the 2011 Winter Games in Erzurum, and some of them later became obsolete. Therefore, there has never been an environment in Turkey that encourages winter sports, directs children and develops the culture of watching the games. In a country with such a large young population, it may be necessary for the people who run the sports to take more initiative to increase interest in the branches over time. Otherwise, Turkey's stability, especially in the Winter Olympics, does not seem likely to change this year or in the coming years. However, it is still possible for talented young people with an interest in winter sports to make history in the future.