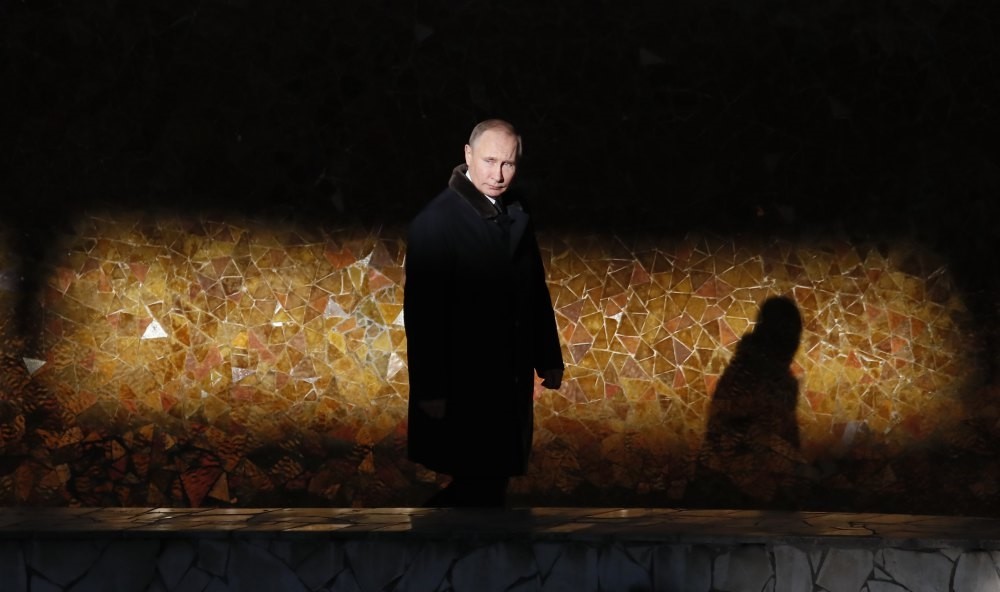 Russian President Vladimir Putin attends a wreath laying ceremony at the Eternal Flame during an event to commemorate the 75th anniversary of the Battle of Stalingrad in World War u0131u0131 in Volgograd, Russia Feb. 2.
by Jane Louise Kandur Feb 17, 2018 12:00 am

Russians are going to the polls on March 18, 2018, and the conclusion seems foregone that the winner will almost certainly be Vladimir Putin

"I cannot forecast to you the action of Russia. It is a riddle, wrapped in a mystery, inside an enigma; but perhaps there is a key. That key is Russian national interest."

This quote from Winston Churchill sums ups the West's perception of Russia throughout history. It has always been difficult for Western pundits to predict what Russia might do. There is a tendency to try to judge the actions of the Russian government, the Russian people, and even the Russian voter according to Western standards. And this causes perplexity, as Russian actions and reactions often make no sense to an outsider.

It is predicted that President Vladimir Putin will win this election. At the moment, Putin's approval rating is in the high 70s. Add to this the prediction that there will be low turnout on the day, and Putin seems a shoe-in.

Of course, there are other candidates.

The leading opponent, in that he has a strong following and openly criticizes Putin, is Alexei Navalny. However, Navalny has been prohibited from running, due to a criminal record; according to Navalny, the charges were trumped up.

Navalny has little support outside major Russian cities, which is another worrying trend. Someone who is only supported by upper-middle-class professionals may not truly represent the people. If he could run, it is thought Navalny would get about eight percent of the vote.

Another candidate is Ksenia Sobchak, who openly claims to be benefitting from the "Trump effect." That is, she is cashing in on her fame among the television-viewing population. Sobchak is well known for hosting the reality program "Dom-2," and add to this her past as a Playboy model, and one can better understand her popularity. Sobchak describes herself today as a journalist and opposition activist. She says that although she probably will not win, she can bring some important matters into the open.

Yet Sobchak is the establishment. Her father, Anatoly Sobchak, was St. Petersburg's first elected mayor. He was also Putin's boss. Ksenia Sobchak sats about her past, "We had a chance to live as in the West, we had beautiful cars, beautiful offices, good jobs. We dressed like Europeans, spoke languages and traveled."

According to Navalny, and many commentators, Sobchak is just a distraction. She is there to draw the fire when Putin will be accused of running without any real competition. And in reality, at the present time less than 0.5 percent of the population would vote for Sobchak. According to another poll, 53 percent of Russians would not vote for a woman to head up the country. But there are six more candidates. Pavel Grudinin is a strawberry farm director. The Communist Party has nominated the 57-year-old millionaire even though he is very proud of his great wealth.

Vladimir Zhirinovsky is 15 years older, and is the leader of the ultranationalist Liberal Democratic Party. His rabid xenophobia garnered him 6 percent of the vote in the last presidential election.

Grigory Yavlinsky is 65 years old. He represents the older liberal voters in major Russian cities. Yavlinsky got 6 percent of the vote in 2000.

Boris Titov is Putin's business ombudsman. This is the first time he is running for president. He is trying to get votes from among businessmen.

Maxim Suraikin is only 39 years old, and has been nominated by the Communists of Russia, a small party that is trying to offer an alternative to the Communist Party. He has political experience, as he participated in the gubernatorial elections in Nizhny Novgorod in 2014 where he got 2 percent of the vote.

The overwhelming tone of the commentaries is that the Russian election will not and cannot be fair. This predicted unfairness is not due to fears of ballot rigging and cheating. The overwhelming complaint seems to be that Putin has unfair airtime and thus gets greater publicity.

It is claimed that Putin has control over most of the Russian television channels. But if one considers the Turkish situation where a party is allocated airtime according to their percentage of the vote in the last election, then maybe having an 80 percent approval rating means more airtime.

And there is another issue here. Television in Russia, like almost everywhere in the world, is commercial. Ratings are all important in commercial television. Sobchak, the former Playboy model and reality television star, will probably get a lot of airtime. There are many theories already out there that Sobchak is just a straw man (or woman) put into the election by Putin to drum up greater turn out and to put a polish of democratic fair play on the election.

As a result, it does not take much foresight to predict that there will be commentators crying out that Sobchak is getting greater coverage than the other pale, stale male candidates. Yet in reality, if she does appear in the media more, this could just be the result of competition for ratings. Television companies want to encourage people to not change the channel, to tune in and watch. One way to do this is to have a candidate who is known to the television-watching population, and who was a Playboy model. Another guaranteed way to increase ratings is to have the man who is running the country talking about what he will do when he is re-elected - this will generate interest, because he is talking about policies that will probably be introduced. Power and sex appeal guaranteed rating boosters.

Putin's high visibility is not the reason he will win the elections. He already has a high approval rating, and this in reality has little to do with his ability to appear on television or address the people. In the 17 years that Putin has been in office, the Russian gross domestic product (GDP) has risen by over 75 percent, and the economy is growing at 1.6 percent.

Yet, Western pundits are still scratching their heads, puzzled as to why someone like Putin keeps winning elections, over and over again. The fact that he keeps winning, in the Western mind, means that there can be no real democracy in Russia.

According to a poll taken in 2015, a majority of Russians, 62 percent, said that they were confident that democracy existed in Russia. This compares to 36 percent in 2010. In 2010, 20 percent of the people thought democratic standards in Russia were slipping, while in 2015, only 11 percent thought democracy was in danger. (https://www.newstatesman.com/politics/economy/2016/01/very-special-version-russian-democracy) The most interesting part of this poll is the question, "What kind of democracy does Russia need?"

Forty-six percent of the population replied that Russia must have a democracy that answered the country's specific needs, that is, in keeping with Russian norms and traditions.

The Russians feel that American democracy would not be right for them. Nor would any form of European democracy suit this country. What the Russians want is a strong leader. One Russian woman is reported as having said, "The ideal ruler for Russia would be someone like Peter the Great. ... Russia needs a strong leader, a disciplinarian."

Leaders who are not supermen - leaders like Boris Yeltsin or Nikita Khrushchev - are not popular with the Russian people, and the country does not benefit from such leaders.

The problem with Russian democracy is that it cannot be compared to Western democracy. Western democracy holds certain values as sacred - for example, human rights, freedom of speech, freedom of the press, and many other ideals. But these values lose their importance when security is a country's paramount concern.

There are few people in the United States who feel that its future is not secure. They are not worried that the U.S. will not continue to exist and dominate the world. It is not likely that the United States will be invaded, divided or divvied out. The same is true for Britain and most European countries. Whether Scotland or other regions leave or not, Britain will remain Britain.

But other countries feel more like Russia. The people in these countries are worried that there may be an attempt to overthrow the government, to take territory away, divide up the land or to try to control state affairs from afar.

When such issues of security are present, matters like freedom of speech become less important. In such a situation, people vote for the man who will put a good wage in their pocket and ensure the future of their country. What the West does not understand, and may never understand, is that in such countries it is the strongman - the man who stands up against perceived threats - who will win. Again and again and again.