PYD is the antithesis of democracy 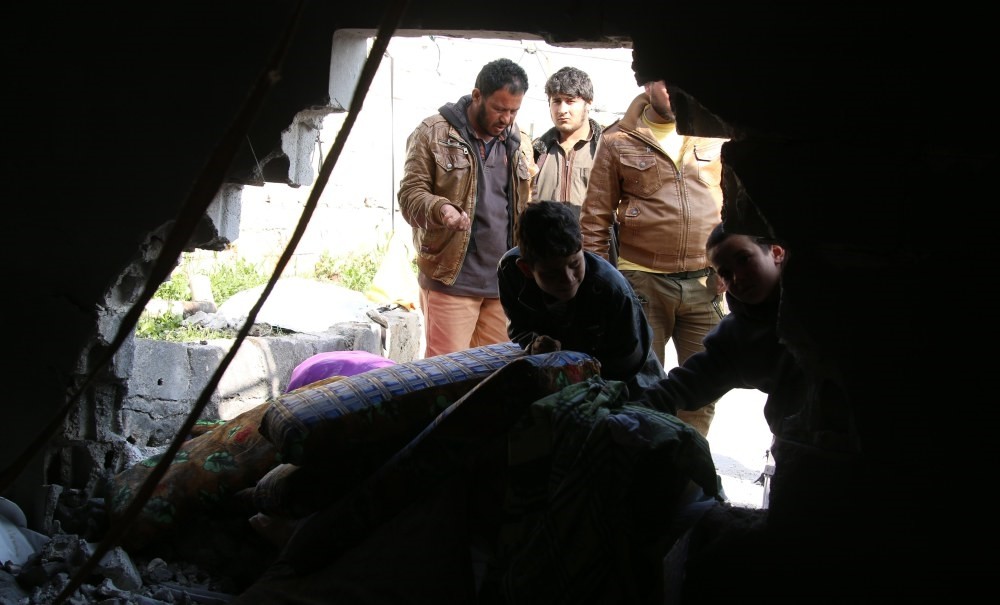 Refugees try to safe their belongings from a makeshift tent that was reportedly damaged by a mortar shell allegedly fired by the YPG in Atma, a town in the northern countryside of Idlib, Syria.
by Özge Bulur Feb 17, 2018 12:00 am

Rahila Gupta's article published on CNN's website this week uses propaganda to justify PYD and YPG terrorism, describing the groups as defenders of democracy and ignoring their oppression of dissident voices

It has been almost a month since Turkey launched Operation Olive Branch in Afrin against the People's Protection Units (YPG) - the armed wing of the Democratic Union Party (PYD). Thousands of articles have already been written for or against that large-scale operation. Some have said Turkey is doing the right thing to ensure its security, while others support the exact opposite notion, believing that Turkey is in the wrong because it "invaded" the YPG-populated region.

Siding with the second argument, freelance journalist and writer Rahila Gupta has advocated, and still does, for YPG terrorists. She does this to such an extent that she even wrote on her personal Twitter account on Jan. 21 that "Turkey is infinitely more dangerous than ISIS [Daesh] as an enemy," in response to another Twitter user who claimed that Turkey's operation against the YPG in Afrin is a war crime.

Well, apparently, fanaticism has no boundaries! It can make one favor Daesh over Turkey as an enemy, even though the latter is not an invader, or an extremist country. Surely, Gupta does not leave romanticizing about YPG terror to a single tweet - she writes dozens. But more importantly, she penned an op-ed article for CNN on Feb. 12 titled, "The world's most progressive democracy is being born. Don't let it get strangled."

Fortunately, this time she didn't give preferentiality to Daesh as the bitter enemy of the YPG. Instead, Turkey was centralized in the very middle as the core reason for all the trouble the YPG terrorist group has recently faced.

For readers sensitive to the sufferings of war-weary Syrians, the lead of Gupta's article is just the ticket as it articulates those feelings of solidarity, pacifism and humanitarianism, by reminding that the Syrian civil war "no longer features on our front pages and television news." Gupta is right. The number of articles written concerning ill-fated Syrians has diminished, so has the number of TV news stories, and this is the only argument where she stands as a nonpartisan of the YPG. The rest of her article presents a chain of YPG propaganda against Turkey.

You don't have to be an omnivorous reader or media-savvy to understand that the defenders of the YPG always use the "but-they-fought-against-Daesh" card to legitimize their actions, even those that are extremely brutal, of a group which declares itself, at every turn, an affiliate of the PKK terrorist group.

Unsurprisingly, Gupta follows the same path to initially claim that "Kurds," (referring to the YPG - which she purposefully does not use the word militia in an effort to position Turkey as being against the Kurdish people and not a terrorist group) who once fought against Daesh "are now under attack in Afrin." To rally supporters to the Syrian Democratic Forces (SDF), predominantly led by the YPG, Gupta resorts to another trump card and says civilians fall "victim to Turkey's random bombing," without even mentioning how YPG forces use civilians as human shields.

There are more than enough cliche; arguments that Gupta, like many other YPG sympathizers, roll out to defend the group. Big concepts such as gender equality, secularism, revolution, humanism and ethics are what Gupta cites, in a way, to smooth over the cracks of the group's terroristic threats to the region. Gupta is right, I would say again, unless there were not a lot of reports on how the group violated human rights, and still does, by carrying out attacks on opposing Kurdish groups, in addition to non-Kurdish populations in northern Syria - namely Arabs and Turkmens.

Let me remind Gupta then why and how the YPG cannot be a democratic entity with a history of undemocratic and abusive actions:

A report published by the Syrian Network for Human Rights on Oct. 27, 2015 showed two years ago that the YPG forced tens of thousands of people - mostly Arabs - to evacuate more than 70 villages in al-Hasakah province where 8,000 Turkmens were also exposed to human rights abuses. The group even looted and destroyed all evacuated homes so that non-Kurdish people cannot return home. This report, by itself, proves Gupta wrong since she looks at the PYD/YPG through rose-colored glasses, saying, "We are so used to the idea of ownership, borders and territorial aggrandizement that we can understand the Kurdish enterprise only as a land grab." Tut-tut! She would be right - if you ignore the report mentioned above and the countless others similar to it, or the pictures of Arabs who have been displaced from their homes in Afrin, and elsewhere, and have been forced to take shelter anywhere the YPG isn't spreading terror.

By the way, if it carries any weight for Gupta, nearly 250,000 Kurdish, Arab and Turkmen people have migrated from Afrin, as confirmed by government spokesperson Deputy Prime Minister Bekir Bozdağ, who spoke to foreign journalists on Jan. 21. We can already say that the YPG, in its fullest sense, landed a grab a long time ago in northern Syria.

Gupta praises the PYD/YPG to the skies and portrays the group as the protagonist of a Utopia where "a sanctuary" is provided "to 2 million refugees from the rest of Syria and Iraq." I don't want to wake her up from her dreams but I must say that PYD-dominated areas were an inferno for 300,000 Syrian Kurds (the number given by Turkey's Ambassador to the U.S. Serdar Kılıç in his letter to Bernard-Henri Levy, whose op-ed article in The Wall Street Journal on Feb. 7, describes Turkey as an invader in Afrin, and calls to kick Turkey out of NATO, pretty much like Gupta).

Even reports by the Kurdish National Council (KNC), an assembly formed by political parties and civil society organizations defending the rights of Kurds in Syria and Iraq, on the criminal profile of the PYD/YPG serve more than enough to see how anti-democratic and non-humanitarian the group is especially against Kurds. Kidnapping Kurdish dissidents is a habit for the PYD, which last year on Feb. 9 abducted Fadi Marie of the Future Movement and a member of the KNC's secretariat while he was traveling on the Qamishli-Ma'abada road in northeastern Syria. The group's official site shows that only between March 14 and March 16, 2017, over 20 offices "have been torched or demolished, and subsequently were sealed up by PYD security forces." The group's leader, İbrahim Biro, was expelled from northern Syria and threatened by the group to be "cut into pieces" if he ever returns. Does anyone think such actions of the PYD/YPG correspond, in Gupta's words, to "progressive democracy?"

If anyone happens to believe that the terrorist group might have broken its habit of oppression and coercion, (just because it has gotten all tuckered out while trying to stop Turkey's Afrin operation) I unfortunately must make it clear that the group's habit is for lifetime. The former spokesman of the KNC foreign relations office, Siamend Hajo, who spoke to Daily Sabah this Thursday, said he was suspended as a result of pressure from the PYD/YPG for coming to Turkey to attend a panel on the group's affiliates at the Foundation of Political, Economic and Social Research (SETA). So where does not letting a dissident voice criticize the PYD/YPG's ideology fit into "the world's most progressive democracy."

Let's all pretend that the PYD and its armed wing YPG are not actors of terrorism. Their closing down of media outlets, offending civilians, abducting journalists, forcing children and women for recruitment, and confiscation of personal or state property are enough to prove Gupta, and the like, that the group cannot and will not "spawn a more humane, rational, ethical and equal world." Instead it will spread more terror and oppression, unless it is cleared from the region.