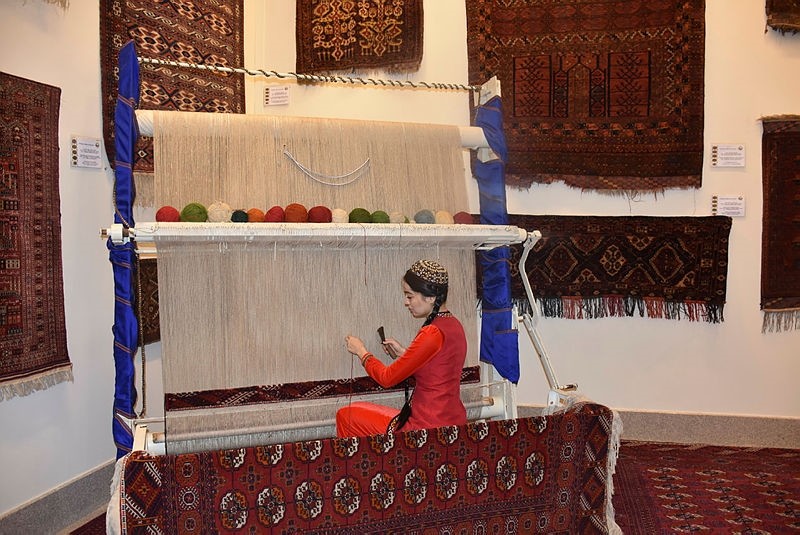 Turkmen rugs are among the national symbols of Turkmenistan, which use many colors and motifs with intricate weaves.
by Anadolu Agency Mar 10, 2018 12:00 am

First produced by nomadic Turkmen tribes centuries ago, intricate and magnificent Turkmen carpets have become a cultural symbol of the country and are among the most sought after handmade rugs in the world

In Turkmenistan, famous for horse breeding and carpet weaving, Central Asian Turkish culture is evident in every part of society. World famous Turkmen rugs and Akhal-Teke horses, whose numbers are limited to a few thousand, have been protected for centuries as an important parts of the country's cultural heritage.

Turkmenistan has been heavily influenced by Central Asian cultures making it a unique destination for people curious about the region's rich history.

Famous for its historical and natural beauty, Turkmenistan's capital Ashgabat is home to various architectural styles, from marble palaces to golden statues.

After the capital was destroyed in an earthquake in 1948, many buildings were reconstructed with Turkish and Italian marble.

Late Turkmen leader Saparmurat Atayevich Niyazov said, "I promise you a city of white," during its reconstruction following the quake. Keeping his word, the huge city was reconstructed using white marble, including the outsides of buildings. The end result made Ashgabat, with its 490-square-kilometer acreage, a pure white rarity.

The streets of Ashgabat, known as the marble city, are also home to numerous gigantic marble monuments and statues.

To keep the famous capital as clean as possible, strict rules have been established restricting smoking in public and littering, and those careless enough to ignore the restrictions face heavy punishments.

The centuries-old tradition of weaving Turkmen rugs produces the most expensive and highest quality products in the world, exuding elegance and magnificent craftsmanship. These eye-catching rugs, which are one of the national symbols of Turkmenistan, draw buyers from all over the world with their patterns, colors and intricate weave, and also why the National Carpet Museum is a favorite stop for tourists. The museum exhibits the rarest examples of Turkmen-made rugs.

The "Golden Century" carpet, registered in the "Guinness World Records" in 2011 as the biggest carpet in the world, is among the pieces on display at the museum. People who see the carpet measuring 14 meters wide, 21.5 meters long and weighing in at 1, 200 kilograms are always impressed by its massive size. A total of 40 people, including one man, worked together to weave the carpet over seven months.

Many rugs of different colors, motifs and sizes from different periods are on display at the museum where visitors can learn about the carpet-making process, from thread types to weaving. Traditionally, the rugs reflect aspects of Turkmen culture and spiritual traditions through patterns, color harmony and the density of the spaces between warps. 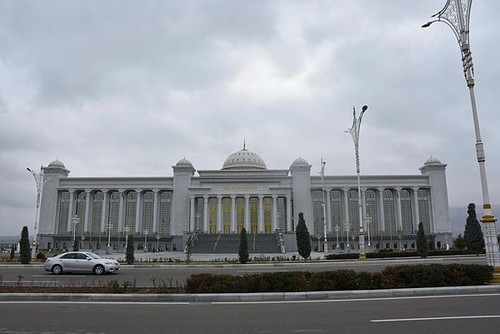 The Turkmen capital Ashgabat is known as a marble city because of its buildings, monuments and statues built using white marble.

"Carpet Day," which has been celebrated on the last Sunday of May since 1992 in the country, reinforces the importance Turkmens place in their carpets and rugs. To celebrate the popular day, concerts, exhibitions, fairs and conferences are often organized.

The state institution, Turkmen Carpet, oversees the carpet companies in the country and the organization of Carpet Day celebrations. This ministry-like institution, which is directly linked to the presidency, handles all things carpet-related, such as promoting Turkmen rugs around the world and supervising quality standards.

Endemic Akhal- Teke horses, whose numbers are limited to only a few thousand, are eye-catchingly beautiful with their manes shining in the sunshine, bright bodies, thin necks and long legs.

These horses are mentioned in Turkish legends, including the "Epic of Manas" and the "Book of Dede Korkut," and are among the most beautiful horses in the world. Turkmens appreciate these beautiful animals more than anyone else, being the only country in the world with a Horse Ministry. Horse Day is also celebrated in the country on the last Sunday of April every year. The horses are never sold but sometimes given to a select few by Turkmenistan's government.

Gaining independence in 1991 after the collapse of the Soviet Union, Turkmenistan describes its relationship with Turkey, the first country to recognize its independence, as an "eternal bone brotherhood."

Relations between the two countries, which share a common history, language and culture, have continued in a balanced, respectful frame based on collaboration.

Turkmenistan was recognized as a "Perpetual Neutral Country" by the United Nations General Assembly in 1995, and neutralism still remains one of the most important principles of the country.

Turkmenistan's economy is primarily based on natural gas and cotton production and is the fourth biggest natural gas producer in the world.