During the 13-day Newroz holiday in Iran, 100,000 Iranians are expected to visit Turkey's southeastern region

Van is located in Turkey's far east, near the Iranian border, where Central Asia and the Middle East meet. It is encircled by mountains that feed a huge lake with icy waters and decorated with numerous floral species. The Chairman of Van Executive Board of Association of Turkish Travel Agencies (TÜRSAB), Cevdet Özgökçe said that they are aiming to welcome 50,000-60,000 Iranian tourists at their hotels in this naturally beautiful province within 18 days during the Newroz holiday in Iran. The East Anatolian Region has now restored peace and safety and will be welcoming tourists from all regions, but mainly Iranians who prefer Turkey during their national holidays as a result of the progress in relations with the neighboring countries and the efforts for promotion of Turkey.

The tradesmen in Van are preparing for Newroz and the occupancy rate has already reached 80 percent in the city. Speaking to Anadolu Agency (AA), Özgökçe noted that the Newroz holiday starts on March 18 and lasts until April, and they are expecting to host 100,000 Iranians, including transit passengers. There have been sector meetings held before the season, and efforts will continue as Van will be welcoming 100 tour operators in Iran for three days to inform them about the historical and natural beauties of the region.

Özgökçe also stated they had meetings with the tradesmen of the region to request them to show the required sensitivity in order to ensure that Iranian tourists leave the town satisfied. The temperature, predicted to be above seasonal normal, is also believed to enhance the number of tourists visiting the region. "We introduced Van in the fair organized on Jan. 23 in Tehran. The Iranian market has become a crucial market for us as Iranian tourists like and prefer Van. The main reason is the proximity and the convenient shopping possibilities. In reality, we do not need to introduce Van in Iran as Iranian tourists prefer our city because of our food, shopping and entertainment opportunities," added Özgökçe.

"We are expecting to host over 100,000 guests during Newroz. Not just Iranians, but we are also expecting German and Russian tourists to visit Lake Van and we will be welcoming them with new investments, shores and hotels," said Aydemir.

One of the hotel managers, Sefer Bayram, also noted that the tourism industry in Van is expecting to reach full capacity during Newroz and they will be organizing various events and concerts for their guests. "Our only aim is to satisfy our customers and Iranian tourists are a great economic opportunity for our country," concluded Bayram.

One of the Iranian tourists visiting the region, Reye Celri, stated that she has visited Van for the shopping and loved the city and the opportunities it offers. "We are leaving with lots of shopping and we will back in Newroz," said Celri. 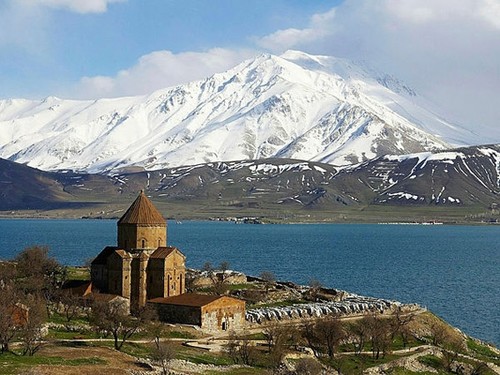 Akdamar Island on Lake Van, the largest lake in Turkey, is among the most important tourism destinations in the region with its historic church and natural structure. Located within the Gevaş district, which is 45 km from eastern Van province, the island offers beauty that is worth seeing in all seasons, especially in winter.

Akdamar Church (Cathedral of Holy Cross) on Akdamar Island, one of the 10 places in Turkey on the UNESCO Temporary List of World Heritage Sites, was built by architect Manuel in 915-921 following an order by King Gagik I Artsruni to house a piece of the "Holy Cross," which was reported brought to Van in the 7th century after it was taken from Jerusalem to Iran. The church, constructed on the southeastern part of the island, is regarded as one of the brightest works of medieval Armenian art in terms of architecture. The exterior of the church, built of red andesite stone, contains rich plant and animal motifs and scenes taken from the Holy Book, carved in low reliefs. 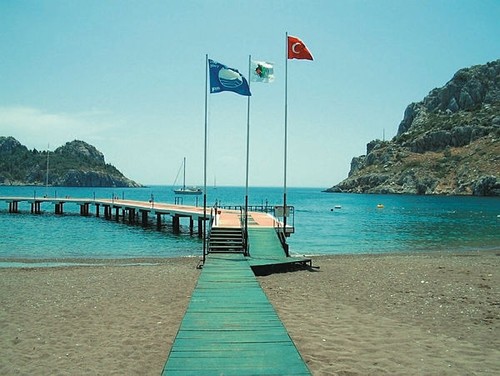 Lying on the Eastern Anatolian region, close to the Iran border and covering an area of almost 1,500 square miles, Lake Van is a crater lake formed after the volcanic explosion of Nemrut Mount. Due to its high salinity, the lake's water is not suitable for drinking and irrigation. The saline soda lake receives its water from a few smaller streams, which pour into the lake from the surrounding mountains. Some of the lake's main inflows are the Karasu, Hosap, Güzelsu and Zilan streams. The lake's western parts are deeper, while its Eastern waters are much shallower. Ayanis Beach on Lake Van has recently received "Blue Flag" status, an eco-certification for beaches and marinas by the Foundation for Environmental Education (FEE) given after they comply with a number of standards including water quality, environmental education and information, environmental management and safety.