Hail the new sultan: Tradition of celebrating succession in the Ottoman-era 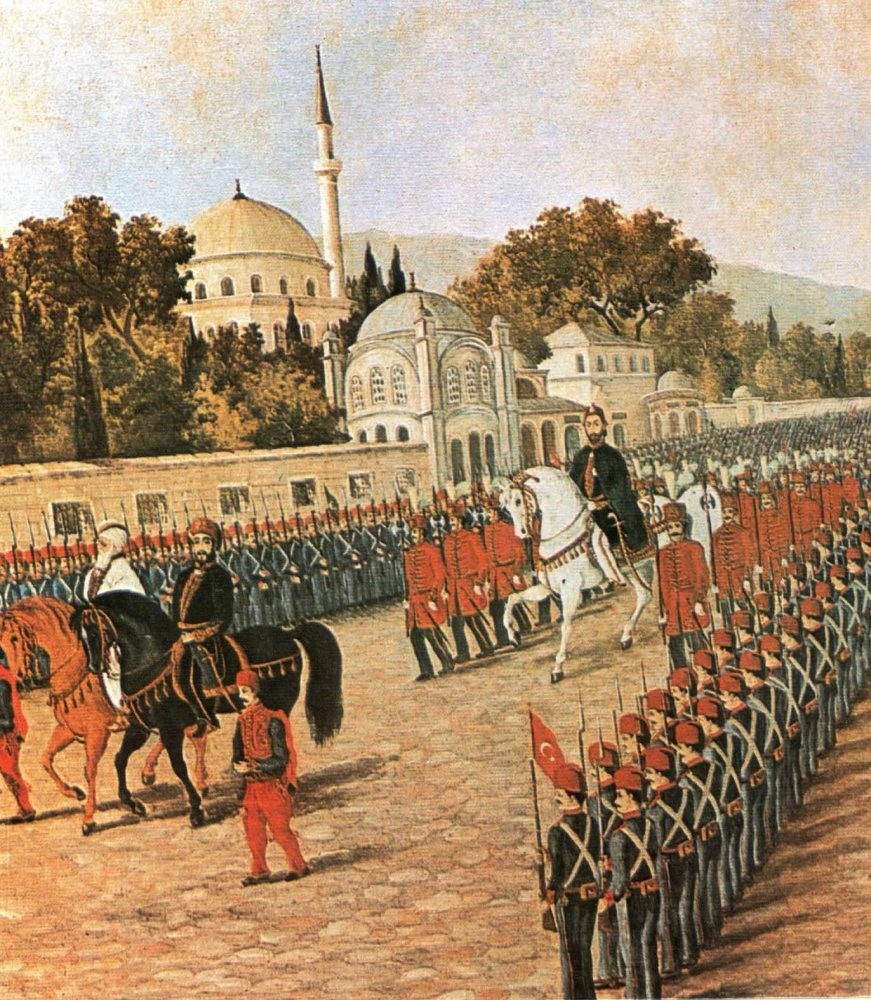 A painting by an anonymous artist of Sultan Abdu00fclmecid during his sword-girding ceremony.
by Erhan Afyoncu Mar 16, 2018 12:00 am

Although succession to the throne in the Ottoman-era almost completely changed towards the end of the 16th century, the tradition to celebrate a new sultan remained the same in all its glory

Until the end of the 16th century, all sons of sultans had equal right to the throne of their father in the Ottoman Empire. The princes, called shahzades, were sent to various provinces, or sanjaks, in Anatolia to gain experience in administration. News of the death of the sultan was delivered immediately to the princes in the sanjaks by messengers. The prince who first reached Istanbul and took control of the empire's facilities, sat on the throne as the new sultan.

Accession of a new sultan

The tradition of sending princes to the sanjaks was completely abandoned following the reign of Mehmed III, and struggle for the throne among princes came to an end. After the reign of Mehmed III, the grand vizier who heard of the death of the sultan from a eunuch informed the other dignitaries in Istanbul. The vizier immediately went to the court dressed in mourning attire and started to wait for the new sultan to come to the Divan-i Hümâyûn (Imperial Council) or the Circumcision Room. The eunuch - who usually served in the chambers of the princes and princesses - went to the crown prince's chamber and informed him about the death of the sultan and invited him to the throne.

The eunuch took one arm of the prince who was convinced after seeing the body of his predecessor while the weapon-bearer took his other arm on his way to the Hırka-i Şerif (Holy Mantle) chamber. Here, the first allegiance was pledged to the new sultan, first by the grand vizier and the Shaykh al-Islam and then by the eunuch and some dignitaries.

After the first oath of allegiance, preparations of the general allegiance started. Immediately, those who were to be present at the enthronement ceremony were invited to the palace by the master of ceremonies and an invitation was also sent to the new sultan. Later, the sultan's throne was established in front of the Bâbüssaâde (Gate of Felicity). When the master of ceremonies arranged everyone in accordance with their positions, the Agha of the Gate of Felicity informed the sultan in the Hırka-i Şerif chamber that everything was ready for the oath of allegiance. The sultan entered with the chief eunuch of the palace at his right and first the Agha of the Gate of Felicity and then the weapon-bearer at his left. The sultan saluted both sides of the square and sat on the throne.

Starting with the chief representative of descendants of the prophet, everyone took their turns to pledge allegiance to the sultan. The accession ceremony was complete after the master of ceremonies pledged his oath of allegiance. 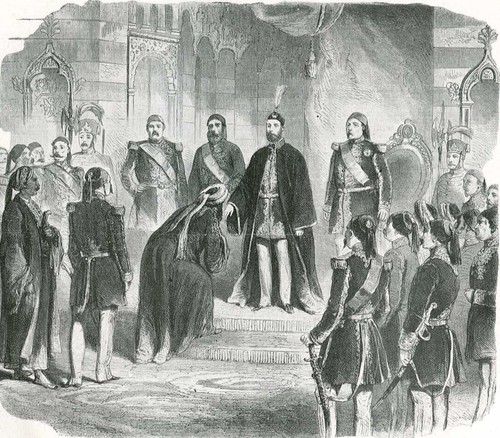 A drawing by an anonymous artist of Sultan Abdülaziz during his general allegiance ceremony after he succeeded to the throne.

After the allegiance ceremony at the palace, the first public appearance of the newly enthroned sultan was the sword-girding procession. There was no exact day the sword-girding procession would be held on, but the wishes of the sultan and the situation during the accession dictated it. When the date of the procession was decided, invitations were sent to those who had to attend the ceremony one day before, and everyone came to the court in the morning in official robes the next day upon the invitation. From the sultan's household troops, first gun carriers and then artillerymen, armorers and janissaries came and lined up on both sides of the yard. After the sultan performed the morning prayer, he was told that everything was ready for the procession at an appropriate time. If he were to go to Eyüp by land, he would leave the Gate of Felicity with the procession and continue his journey through the soldiers. After visiting the tomb of Mehmed the Conqueror, he went to Eyüp.

If he went by water, he would leave through the Curtain Gate of the Imperial Harem, ride down to the Sinan Pasha mansion on the shore and go to Eyüp with three sultanate boats sailed by the chief executioner. Meanwhile, the grand vizier, state dignitaries and others who came to Eyüp by the land with the procession welcomed the sultan at the Bostan pier. The sultan was initially taken to a mansion where preparations for dinner were made beforehand. Resting for a while and eating dinner, the sultan later rode to the tomb accompanied by dignitaries. After the prayer, the sword-girding ceremony was held, followed by sacrificing animals and feeding the poor. After the ceremony, the sultan returned to the palace with his company by land if he used the sea route, or vice versa, rarely using the same route twice.

The tomb of Mehmed the Conqueror, which could not be visited due to the sultan's arrival from by water, was visited on the way back. During the departure or return by land, the sultan was entitled to drink the sherbet presented him by the head of the chamber of the 61st community of janissaries and fill the cup with gold while passing by the Old Chamber opposite Şehzade Mosque, followed by three animal sacrifices by the head of the chamber. According to the late Halil İnalcık, the new sultan accepted the allegiance of his subjects with the sword-girding procession in Eyüp Sultan just like he accepted that of the dignitaries in the palace. The sword-girded sultan was entrusted with divine power so that the new ruler gained the right of sovereignty.

Apart from the enthronement ceremony in the palace, criers were sent through Istanbul to announce the new sultan's ascension to the throne while ordinances were sent to other regions of the empire in this regard. With the telegrams began to be used by the empire, they were used for notification regarding the ascension.

With this news, festivities were held all over the empire, especially in Istanbul, and a sermon was read on behalf of the new sultan. The same news was announced to neighboring powers by letter. From the time of Mahmud II, festivals were organized in the city to celebrate the anniversaries of the sultan's accession.

From the very beginning of Sultan Abdülaziz's reign, the anniversary of the accession was officially commemorated with ceremonies held at Dolmabahçe Palace. Since a beard was seen as the symbol of the sultanate, the newly crowned prince left a beard with a ceremony called "İrsal-i Lihye" (Leaving the Beard). If this ceremony could not be performed because the new sultan was an adolescent or younger, it was fulfilled with a ceremony when the sultan entered his 20s. Immediately after enthronement, the sultan minted a seal called the "mühr-i hümâyûn" (privy seal) in his name. This seal was given or sent to the former grand vizier dismissed from duty due to the change of sultan or the new grand vizier appointed by the sultan. The vizier, who was invited to an audience with the sultan and presented with the seal, came to the Bâb-ı Âli (Sublime Porte) and presented dignitaries dismissed from duty because of the change of sultan with robes of honor in a special ceremony and returned them to their positions.