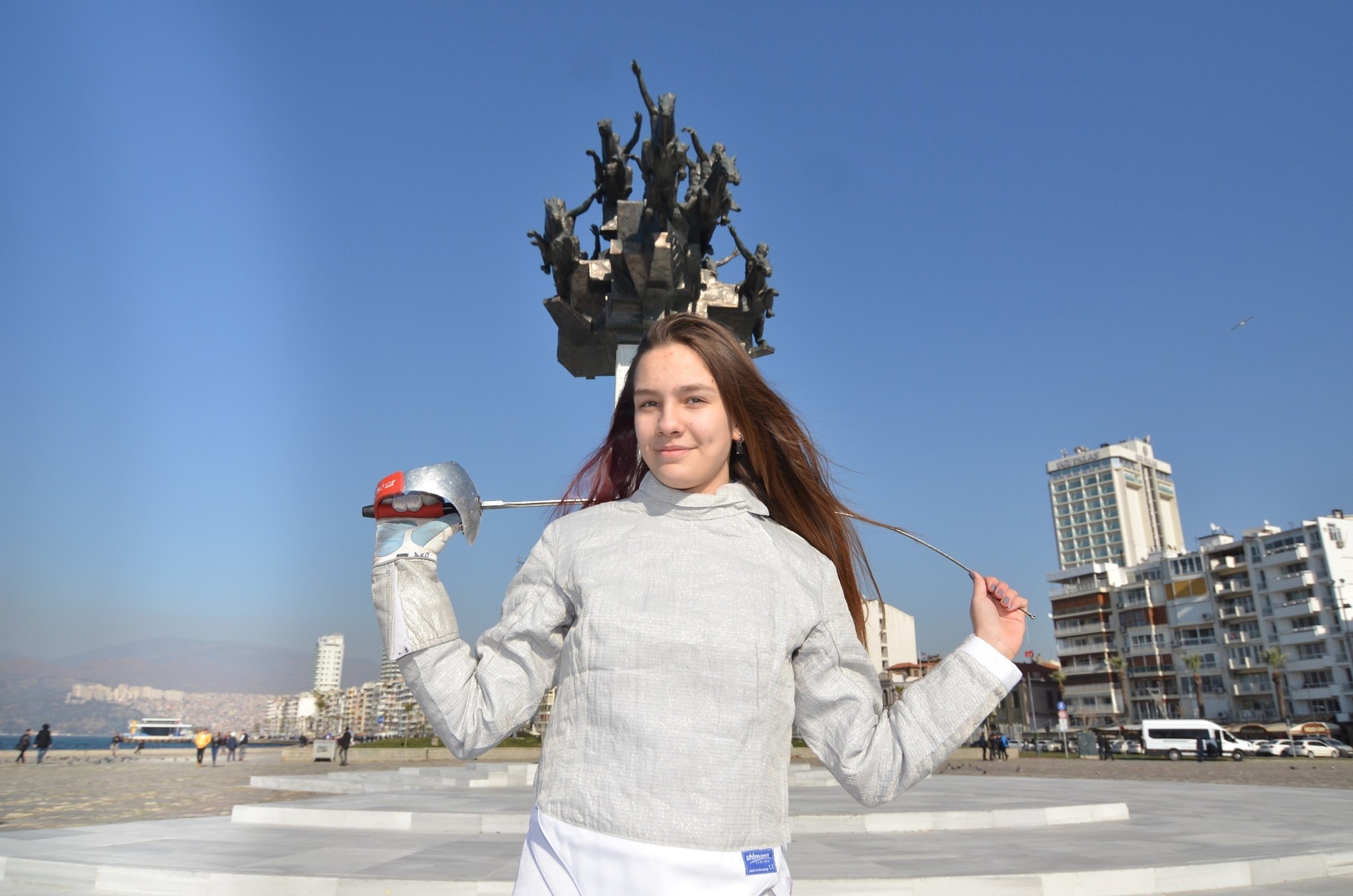 Growing up in a family who loved sports, Deniz Selin u00dcnlu00fcdau011f took interest in fence after watching the Disney series u201cPirates of the Caribbean.u201d
by Damla Kayayerli Mar 19, 2018 12:00 am

Deniz Selin Ünlüdağ made history after winning the gold medal at the Junior and Cadet European Fencing Championship. Daily Sabah sat down with the fencing phenom to talk about about her upbringing, success and future goals

At the age of 10, Deniz Selin Ünlüdağ was taken aback by the sword scenes in the "Pirates of the Caribbean," so much so that she told her parents right then and there that she would become a fencer.

Seven years later and Ünlüdağ has made her dreams a reality. Today, that little girl is a budding young woman who is a crowned European Champion.

The 17-year-old fencing phenom is the owner of the Cadet Women's Sabre gold medal, which she won by out-dueling her opponents at the Junior and Cadet European Fencing Championship in Russia.

Her life changed when she moved from Ankara from İzmir to pursue her dreams.

She practiced day and night at the Turkish Olympic Preparation Center and did exactly what her trainers told her to do at national camp.

She made sacrifices from her social life in order to achieve success in the international arena.

Ünlüdağ has become the pride and joy of Turkey in just a few short years. She is now one of the most polarizing figures in fencing.

She is loved for making a powerful image for women to look up to.

Breaking new ground as a woman in the 95-year history of fencing, Ünlüdağ said, "I believed that I would be a champion. It is a perfect feeling to be the owner of the gold medal."

She also has a bronze medal as part of the national team that managed to come in third at the Junior and Cadet European Fencing Championship.

Daily Sabah caught up with budding star to talk about her life, her passion for fencing, the championships and her future dreams as a successful national fencer, who has already received 23 medals to date, representing Turkey 28 times.

Daily Sabah: How was your family life when you were growing up? 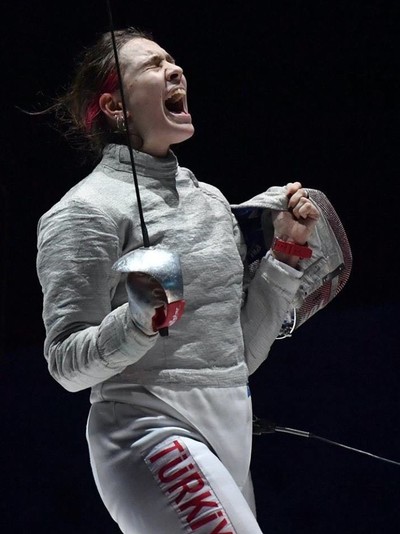 I grew up in a family that was always interested in sports. My father was a sportsman interested in various branches in his youth and he is a dive teacher now. Therefore, they have always supported and stood by me.

DS: How did your interest in fencing start? Is it true that you were influenced by Pirates of the Caribbean?

DÜ: Yes, the Pirates of the Caribbean series were one of the films that I loved most in my childhood. The scenes of sword fighting got my attention. I lived in İzmir with my family back then.

The Turkish Fencing Federation introduced fencing at my school the same years. I told my parents that I would be a fencer. They registered me as a fencer to the İzmir Metropolitan Municipality Youth and Sports Club. Fencing was a dream for me then, but today it has become my passion.

Fencing a reflection of dreams

DS: Fencing isn't a well-known sport, especially in Turkey. How do people react when you share your passion with them?

Actually, there are a lot of people who don't know what kind of sport fencing is among my family and friends. Most of them were curious about whether the sword blows hurt or not. More precisely, they were anxious. I tell them about the protective equipment that has been used in fencing for a long time.

Many people are being influenced by me and my friends' success nowadays and they are encouraging their children to join this type of sports.

After our World and European championships last year, nearly 2,000 children attended the International Children's Cup in Antalya and the number from the previous year nearly doubled.

This shows that our success has made Turkish people love fencing.

DS: What does fencing mean to you?

You find reflections of each person's imaginative world in their lives. Some can transform their dreams into reality while others can't. I am in the first group. Fencing is the reflection of my dreams in the real world.

DS: As a 17-year-old national fencer, you broke new ground. How did you feel when you were crowned European Champion?

In the last pin, my emotions flooded. In fact, we proved that we can compete in the finals to both ourselves and the world the previous year. This year, I competed with this confidence.

However, no matter how self-confident you are, each medal you receive has a different meaning and value. If this medal is gold, it becomes very precious to you.

It is a great feeling to be able to raise Turkish flag and make people listen to our national anthem. The moment I won the championship, all of this passed before my eyes and I was very proud.

DS: How did you prepare for the championship?

As Turkish fencers, our greatest chance is to work with one of the world's best fencing coaches. Valery Shturbabin is a great coach. We learned a lot of things that we did not know to date from him.

The Turkish Fencing Federation made great efforts to bring the coach to Turkey. I also want to thank our federation. The contributions of the Ministry of Youth and Sports and Sports General Directorate's Turkish Olympic Preparation Center (TOHM) Project can't be ignored.

I had an unfortunate injury during my preparation for the championship. However, I still told Recep Koç, the national team coach that we would be European Champion.

The preparation process was very tiring. We got up very early in the mornings and started practices. We had both tactical and physical fitness training. I had to continue my school, as well, which was a tiring process.

DS: What are the advantages and disadvantages of fencing in your life?

It isn't a well-known sport. It is actually advantageous as we don't feel any pressure about the obligation to win. However, it is also disadvantageous that our successes aren't seen as valuable as they deserve to be.

DS: What kind of a person do you become on the track? Does Deniz Selin Ünlüdağ change during a match?

The fencing track is a very different environment. Especially the final track can't be described. It is equivalent to carrying out the responsibility of the Turkish flag which I carry in my clothes and in my masks. Fencing is a sport that requires special motivation. I don't think I'm a different person on the track. On the contrary, when I am there, I am just me.

DS: You dedicated your gold medal to Turkish soldiers in Afrin. What do you have to say about that?

I believe that our soldiers, wherever they are, do their duty so that we and the next generations can sleep comfortably. Therefore, I think that their duty is very sacred.

Our soldiers in Afrin who sacrificed or are ready to sacrifice their lives receive the blessing and prayers of Turkish citizens. I mentioned that I stand by our soldiers with my whole heart and also want to give them this present. I hope they will all successfully return to their homes unharmed.