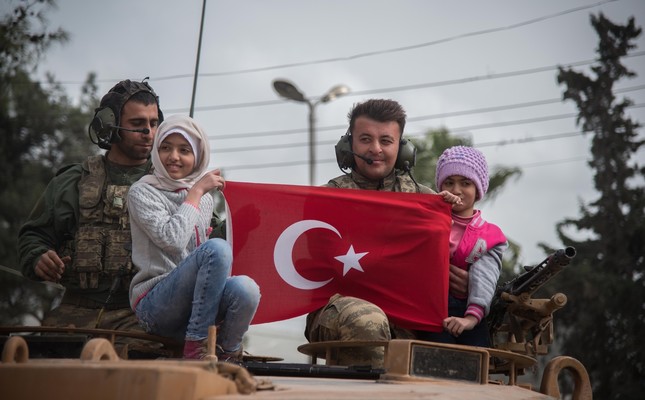 After going through six years of physical and psychological challenges under the administration of People's Protection Units (YPG), locals in Afrin are now free from the terrorists but their minds are still with their children kidnapped by YPG

Locked in an intense discussion, two Kurdish men were sitting on the floor at the main square in the northern Syrian town of Afrin. A big question mark was all over their faces. What kind of a life would they have now? Ezed Bilal, 54, pulled out another cigarette from his pocket, lit it up and the conversation went on to flow.

Behind them was the so-called governmental building that used to serve the PKK's Syrian-affiliated Democratic Union Party (PYD) and its armed People's Protection Units (YPG) for years. On March 18, however, the building served as the scene of a movie-like experience as a Turkish commander hoisted the Turkish flag to claim full victory. 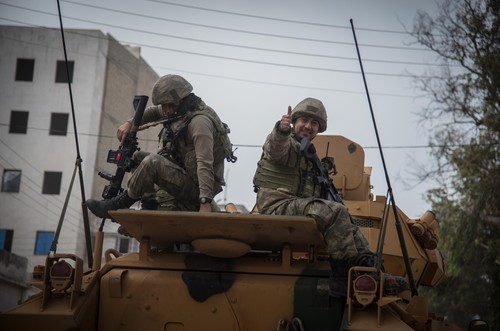 It is nowadays the main talk in Afrin. How can it not be? The YPG brought the town and its surrounding villages under its control in 2012 as the Bashar Assad regime simply let them have everything in the area. Yet, as the YPG's six-year rule comes to a historic end now, a new life awaits hundreds of thousands of people in the predominantly Kurdish region.

"I wish Turkey had come six years ago," Bilal said. He can recount very well how he has had to have breakfast for a long while. "A blend of powdered thyme and a little bit oil on the bread. That's it," he says and takes another puff. 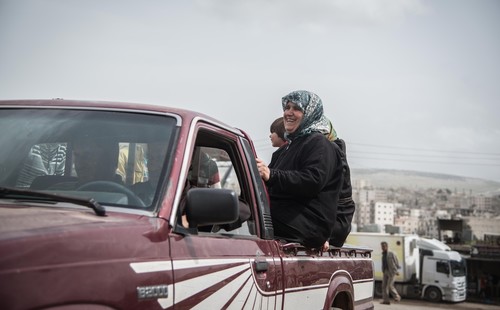 With a red-white keffiyeh on his head, Abdurrahman Nasen, 72, defines his past six years under the YPG control in four words. "Depression, poverty, hunger, disease [...] We were hungry at times, did not have any job and lived without money," he said. 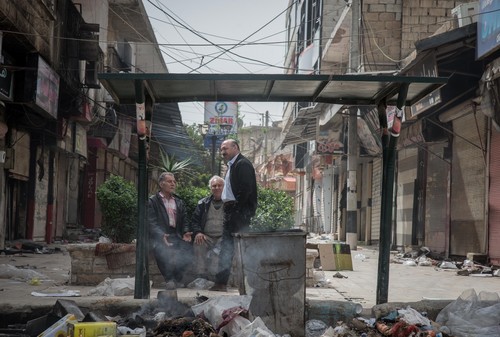 The town, indeed, has been reeling under the aforementioned problems. The YPG, on the other hand, was far from being a remedy. In fact, the extreme levels of levying taxes and forcing people to share their money and property added fuel to the poverty. "Money? The YPG has always asked for more money," Nasen said.

The YPG was entitled to seize from cars to cattle to land. Yet, it was not only the goods that the YPG stole from the people of Afrin. Children were also assets in their eyes that could be seized and used as they please. 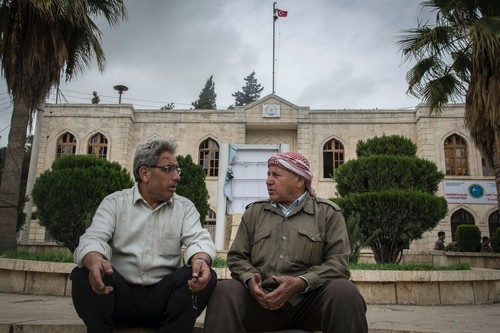 Ezed Bilal (L) and Abdurrahman Nasen talk about the YPG presence in Afrin before the liberation of the city.

Fatima Ökkeş, 43, is quite familiar with it. Ökkeş was dressed in full black. With her three friends, she was sitting on a bench at the main square. When asked about the life in Afrin in the post-YPG period, the four women showed a unanimous reaction with one voice. "Whew!"

Ökkeş is a Kurd. With her husband having been killed long ago in the bloody Syrian civil war, Ökkeş has had to carry the unbearable burden of living in a baffling environment. At a time when finding a job was a luxury even for the men in the town, she fed the children what she could find, often close to nothing. Still, her two sons meant the world to her. 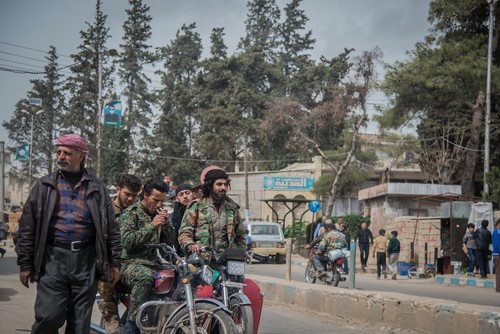 One of her sons was 14 years old, the other 16. One day, they were unexpectedly and cold-heartedly taken away from her. It was the YPG. The duty calls, they said. In fact, the YPG's cruel method of forcing children to fight on the front lines literally cost Ökkeş more than anyone could ever imagine. "What in the world is a 14-year-old kid doing on the front?" she still says in disbelief. 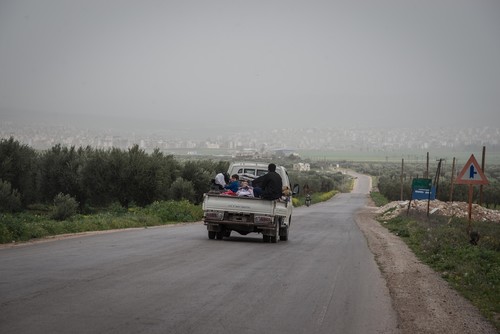 People who had enough of YPG oppression and left the city are returning to Afrin. 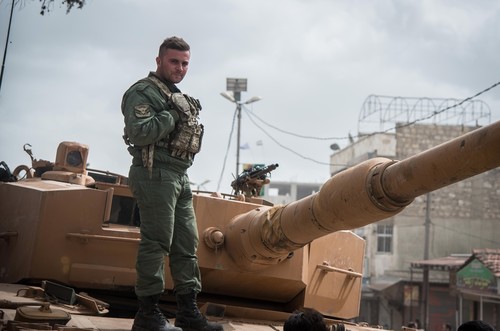 "Armed groups that are distinct from the armed forces of a state should not, under any circumstances, recruit or exploit in hostilities any persons under the age of 18 years," the U.N. Convention on Children's Rights states regarding the involvement of children in armed conflict. Yet, the track record of the PKK-affiliated group in this respect is ignominious. "Forcible recruitments and the deployment of child soldiers by the PYD in Syria," a report put together by KurdWatch in 2015, reported the YPG child recruits are as young as 12 years old, and that recruitment is sometimes forcible.

Furthermore, photos of young girls and boys holding weapons and receiving military training in YPG camps have surfaced recently, presenting yet another form of proof of the group's unlawful tactics.

One day, Ökkeş was rattled with the incoming news. One of her sons, the 16-year-old, was shot and bleeding to death. Rushing to the hospital to see her beloved kid after his months of absence, she was welcomed with another shock. The YPG officials were questioning her. How could she know the details that her son was shot? Was there a spy? 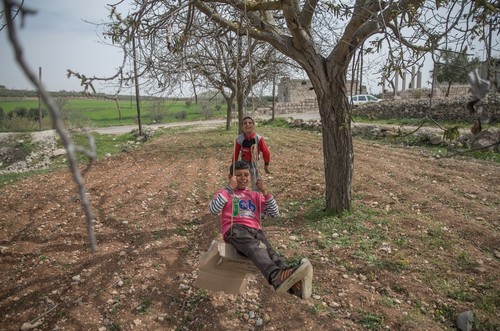 In that very hospital, Ökkeş lost him. She would not cry out and collapse their world around them. She just could not. Her other son was in their hands as well. As of today, he still is. It has been more than a year since the last time Ökkeş could hug "her baby." At the end of the day, he is only a 14-year-old child to his mother.

Ökkeş's story, though, is not unique. More or less everyone sitting at the main square that day shared a similar story. Bilal is one of them. He has three sons, all of whom he lost to the YPG. "Whoever they found here, they took them to the military. I had three sons. God willing they forgive them and let me have my sons back," Bilal cried out with a desperate and frantic voice. 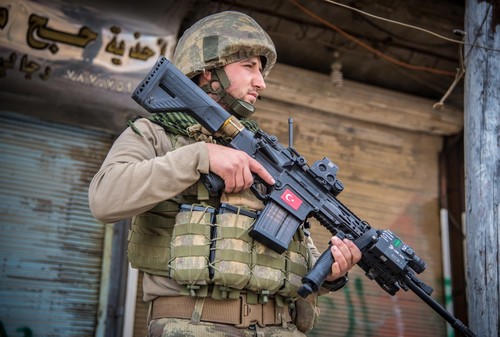 The deafening sound of Turkish tanks rolling on the streets of Afrin disrupts Bilal's words. As a matter of fact, it marks the new era in the town. With the YPG having been routed, the Turkish Armed Forces (TSK) and the Free Syrian Army (FSA) hold the full control. Once seen as one of the fortress of the PKK-linked group, the town is now striving to rise from its ashes.

On Jan. 20, Operation Olive Branch was initiated. FSA fighters, backed by the Turkish military, moved in on Afrin inch by inch, establishing a full siege earlier this month. Finally on March 18, the Turkish military announced the victory. In spite of previous speculations that the town would be a quagmire for the TSK, Afrin has been liberated in less than 60 days with more than 3,700 YPG terrorists killed in operations. 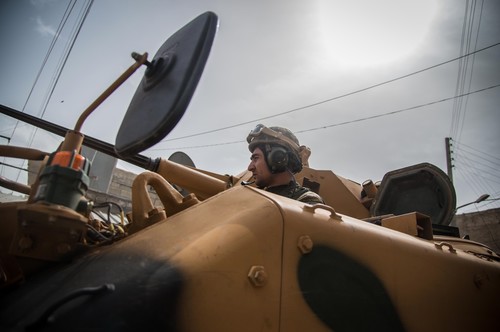 Today, Turkish tanks are patrolling in the town and it is the Turkish soldiers that are welcoming visitors at the main gate. Troops in Afrin are overjoyed. Speaking on the condition of anonymity, the soldiers said morale is quite high.

Moreover, self-confidence is booming. The swift liberation of Afrin has been a boost for the Turkish military. Yet, despite being a small town in size, Afrin was home to more than 300,000 people. Even though 100,000 people remain in the area now and the YPG vows to retaliate with undercover militants, the soldiers are keeping their calm. 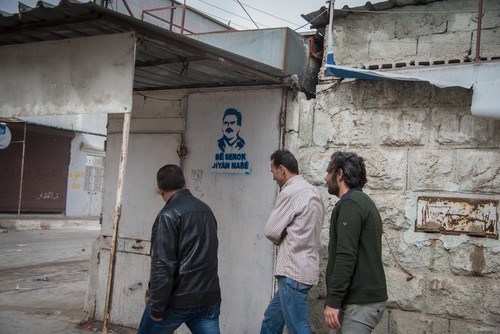 They said there are several thousand Turkish troops, including Police and Gendarmerie Special Forces, stationed in rural and urban Afrin. However, they did not rule out that there are remaining hidden YPG terrorists. They admitted that there are at least two to three undercover terrorists captured in the town center on a daily basis.

As the conversation runs down, the soldier excuses himself. It's time for another patrol. He departs, gets on the tank and rolls through the streets. Some Kurds wave at the soldiers on the tanks. When asked about why they are content with Turkish troops patrolling in their town, a Kurd utters the answer. "We want peace. Whoever wants the prosperity of our children, we love them. They [the YPG/PKK] repressed us too much." 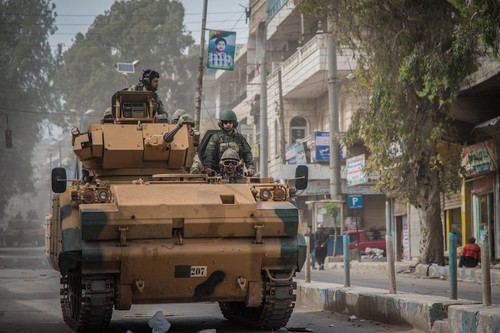 Aside from establishing security across the region, Turkey's ability to swiftly distribute humanitarian aid and provide warm food to the people in newly-liberated areas win the hearts and minds of locals, as it did in Jarablus in 2016 and in al-Bab in 2017. Only a day after claiming the victory, Turkey's Red Crescent and Disaster and Emergency Management Presidency (AFAD) were already mobilized, putting food in the bellies of women, children and the elderly. 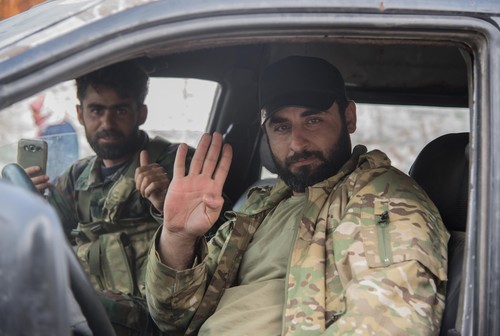 Since then, tens of thousands of people of Afrin, who barely ate at time under the YPG rule, have been provided with humanitarian aid and warm food multiple times a day.

Furthermore, some schools have been renovated in such a short span of time so that children can return to getting an education. Plus, the Turkish Red Crescent is already seeking to put hospitals back into action. "We determined very quickly the need for medical services. We will make sure hosvpitals function again very swiftly," Turkish Red Crescent President Kerem Kınık said last week.

The future of Afrin after its liberation from the YPG occupation remains an unknown. One thing is crystal clear though. Ökkeş's words speak in the name of tens of thousands of Kurds in Afrin. 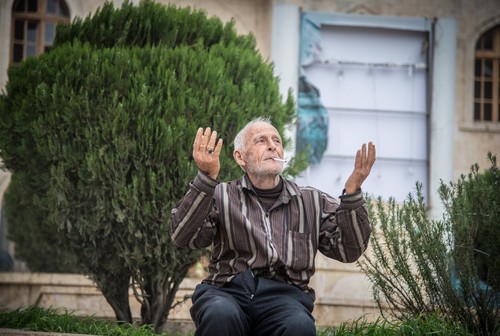 "May Allah never let them come back to rule here again."

Share on Facebook Share on Twitter
Previous in Feature Self-test kits and vending machines distributing prescription drugs... Next in Feature Turkey is a heaven for mountaineers who want to experience the thrill...
DAILY SABAH RECOMMENDS