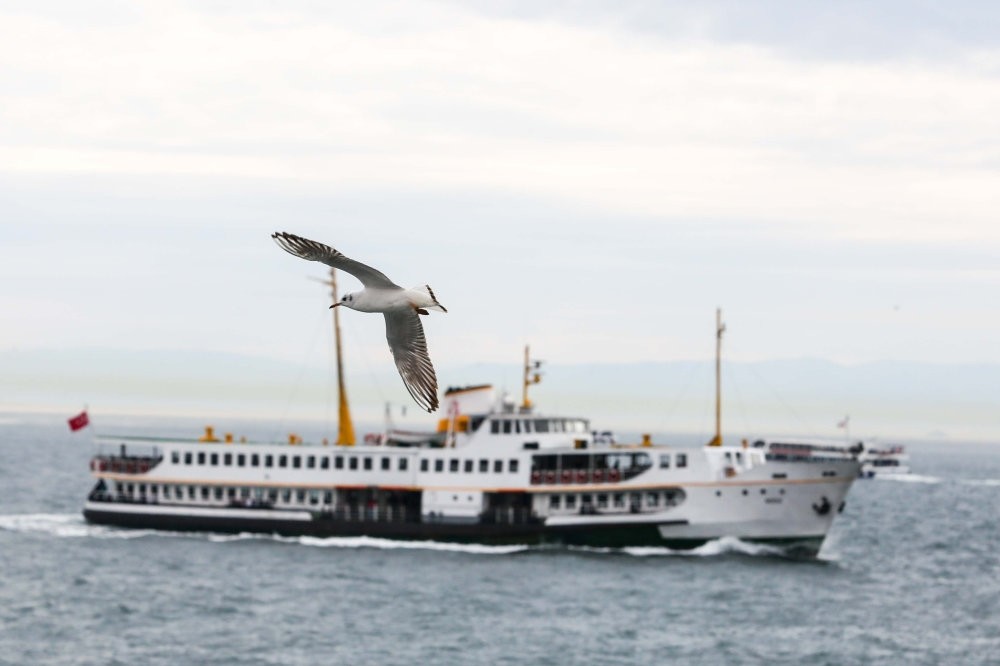 Accompanied by seagulls, ferries of Istanbul City Lines carry thousands of people from Asia to Europe and visa versa every day.
by Anadolu Agency Apr 07, 2018 12:00 am

The captains of Istanbul City Lines take thousands of people to their homes, jobs and loved ones every day past of the best views in the world between two continents

Befriending seagulls and keeping the secrets of the waves, Istanbul's ferries carry thousands of passengers from one continent to the other every day. The passengers from the other side leave behind the unique hum of Istanbul when they cross the Bosporus with the most amazing views.

The captains of the City Lines have been serving the people of Istanbul for 167 years, providing safe trips accompanied by the whistles of the ferry and the sound of the seagulls scrambling for the bagels thrown from the ship's rail.

Captains have Istanbul's unprecedented view from their offices and transport an average of 40 million passengers every year. Sixty-two captains work for Istanbul City Lines with 28 ferries and 29 passenger boats rented for various lines, including three remote lines. 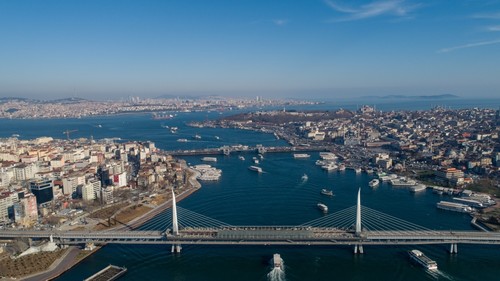 Sharing his love for his profession with Anadolu Agency (AA), Özcelik expressed great happiness to have been a captain for 27 years in Istanbul, explaining that they have the privilege and enjoyment of seeing at Istanbul from the water. "With the seagulls, we carry our passengers from one continent to the other," Özçelik said.

He graduated from Istanbul Maritime High School and said that he has always been in love with the sea.

"We cannot drift apart from the sea. Sailing is a privilege. Its mores, law and hierarchy are different," he said. "At the moment, I am happy to be the captain of the Barış Manço ferry, which is named after late Turkione of the most beautiful ships in the business, under the double anchor, the most beautiful emblem in the world, in the City Lines community. I enjoy doing my job."

Speaking about the passengers who love old ferries like the Barış Manço, Özçelik said this ferry is a nostalgic and beautiful ship like a swan and he is grateful to be the ship's captain. "My ship has regulars. Some want the new generation and latest technology ferries," he said. "Istanbul Metropolitan Municipality has new technology and the latest system ferries, as well. Traveling on them is a different privilege, but it is also a unique experience to travel on the Barış Manço."

Özcelik said some of his passengers knew them by their names, calling out: "Captain Eko blow the whistle," from the pier, adding that they have developed sincere rapport with the people living in waterfront residences along the Bosporus.

Özçelik said that his favorite line is to the Princes' Islands. "We have close relations with the islanders. They even know us by name," he added.

Özçelik said he is quite pleased to work on the Princes' Islands line, which is longer than the Kadıköy-Eminönü route. "Breaking off the mainland and working on the island line makes us happier. The seagulls here are a bit tired because they are our stowaways. We spend an average of 8 minutes between continents, but they travel 45 minutes to the Princes' Islands with us. It is tiring for them, but pleasant for us," Özçelik said.

Özçelik said that the only thing they take when they need to leave the ship is the logbook, also known as the ship journal.

"Whatever the black box on the airplane is, the logbook of the ship has all the information on the ship," Özçelik said. "Like a black box, the ship's logbook is the only thing the captain needs to take with him when he leaves the vessel. This book has everything stored moment to moment."

Özçelik said that they work three days a week and stay on the ship day and night during this period.

Explaining that the ships are their second home, Özçelik said as long as they work, they adopt the ship as their own home, making passengers as comfortable as they are. "When I come to the ship in the morning, I have this tradition to always enter with my right foot. Our happiest moment is when the trip is over, and we have carried our passengers safe and sound.

"We have tea and coffee with the staff to get rid of the fatigue at the end of the day. We chat in the evening, discussing what happened throughout the day and then prepare ourselves for the next day." Özçelik said all the staff have cabins and that whatever they need at home, they also have onboard, adding that in the morning they all prepare the ship, including the machinists, snack bar operators and cleaners.

Özçelik said that City Lines is a culture and that they have been keeping this culture alive since the time of the Ottoman era Şirket-i Hayriye ferry company, adding that Istanbul City Lines General Director Yakup Güler has developed projects for the renewal of fleets with the support of the municipality and that they also attach importance to the protection of nostalgic vessels.

İlker Çetin, 41, has been working as a captain of the City Lines for about 21 years as the third generation of captains from his family.

Çetin said that their job is not only to take passengers from point A to point B, but that they carry passengers safe and sound with quality.

He explained that the nostalgic vessels they use have numerous regulars and that passengers embrace the water along the trip, adding that captains' jobs are very important for the crowded population of Istanbul.

"Everyone on the ship enjoys different things. Some have spent their years taking the ferry since their childhood and youth while some passengers have traveled with the same ferry for 40 years, even sitting in the same spot, drinking tea or coffee and reading the newspaper in that spot," Çetin said.

Çetin explained that he could not live in a city without the sea and that he has to see the water no matter what.