Police officer by day, artist by night: Embracing both identities 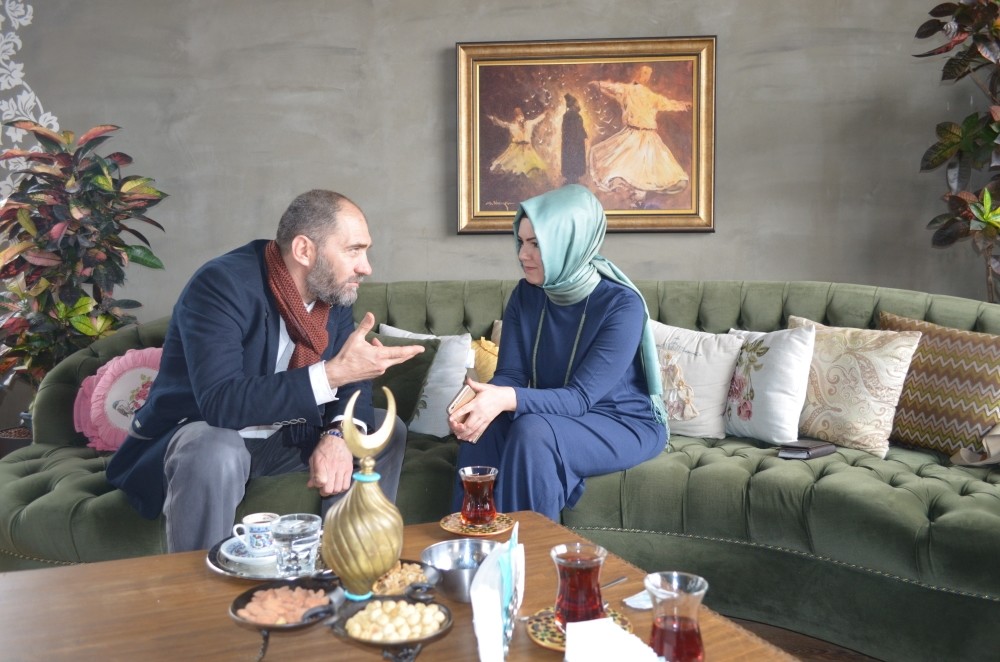 Being both a police officer and artist, Ahmet Sula manages to find a balance between his professions, believing his artistic side helps him to empathize and look at things with a wider perspective

Ahmet Sula, 43, a first degree chief superintendent in the General Directorate of Security, served in the counterterrorism and intelligence units for nearly 30 years. After the Dec. 17 and Dec. 25 judicial coup attempt in 2013 by the Gülenist Terrorist Group (FETÖ), he was appointed as the vice acting head of the counterterrorism unit in Istanbul. He is currently a chief inspector. Today, Sula is breaking the mold with his artistic personality and paintings.

Sula's first love was always art, but life got in the way. His father, who is a laborer, brought home the police college exam form one day and said: "Son, be a civil servant for the state."

Being a police officer and an artist are two very different things, but Sula manages to find a balance.

"I do not make any concessions. There's what we see and what's beyond. It is the person inside those clothes that matters. It's also what you call perception, but truth is the essence you do not see. Avicenna said: 'Those who do not break the walnut and see what is inside think it is all a crust.' They may look contradictory at first, but the important thing is to read correctly. For this reason, things that seem to be opposite have accumulated a lot of things in me, and the ordeal makes a man produce. In my paintings, there is philosophy, writing, images, poems or words. So they have a claim. These things happen while you read and think," Sula said. 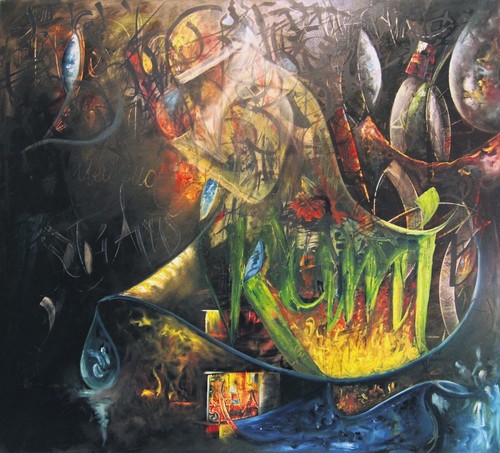 Artists are known for their emotional and sensitive temperaments, and when it comes to Sula, he is also a police officer, which might affect his personal judgment during working hours. Being a police officer means he sometimes needs to interrogate people not knowing if they are guilty or not. However, Sula believes that feelings are necessary in every job, especially in police work.

"Feelings need to be involved, first of all, in an event that has many aspects, do they not? There is the victim, the complainant, the one harmed by the crime. There is the criminal. There is also the one thought to have committed the crime. For this reason, it is necessary to understand each and to approach within the framework of justice, humanity and law. For this, we need emotions so that we can empathize and think about the possibilities."

Sula believes that art enables him to think about all these emotions and feelings more thoroughly and explain them better. 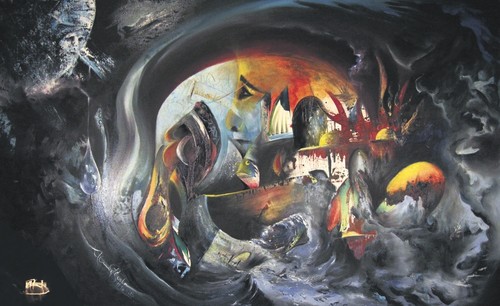 "There was a terrorist, and he certainly did not talk. He wouldn't say a word. We had a resume that they had given to us. I got a point from there, a big deal about his sentimentality. And when I got through that channel, he started telling us everything. There are such things that you just go with reason and evidence, but you sometimes have such a subject with such a side that you go from there. So, my art life actually helped in this situation. The important thing is to reach a person's heart. If you succeed, you will crack the man. Sometimes I can say that it is useful, although not always. However, I should say that when talking about the subtleties of an artist, we do not mean naïveté or fragility, but features such as responsibility and responsiveness to people knowing what to do and where to do it and leading and guiding society."

While being a police officer and an artist at the same time, Sula also came received criticism from both colleagues and others.

"When it comes to being a member of the police, military or security forces, there are always those saying, oh he is interested in poetry, painting, art and exhibitions. No sir, he can't be a cop. Let's just say I have left all this and I'm not interested in any of it. I'm still a cop and so are they. In short, there are two reasons why they say these things – vision and jealousy," Sula explained.

As an artist, Sula creates abstract works of art. Upon being asked what drew his to abstract art, he said that he does not believe there is a gap in life, that there is no empty space.

"For this reason, when I do abstract paintings, the objects go one after another and become integrated and a new thing comes out. I am not a painter who draws a sketch and paints on it. One word or a concept calls out to me. For example, one night blue called out to me. I paint without planning or knowing where it goes. Then when the picture is complete, and the canvas is filled, I look at it, asking what it is trying to tell, listen to the painting, and write down what I feel. Sometimes it is a word and sometimes a poem.

Sula is not only involved in painting, as he is a hands-on artist who is interested in three art forms. For this reason, one cannot help but wonder whether he would be a better artist if he just concentrated on a single one.

"There are those who ask if there is a name for this style," Sula said. But, this style of art is unique to the man himself. His teacher even once said that this style should be named after him and called "Sulaism."

"Such a style must exist because if you walk in any of the different branches, you will only be another person in that field and you cannot make a difference. I think that if you can only appeal to a person's eyes, she will only see you. She is blind, but she hears you. When you touch her, she feels it. I must make such art that it should touch all the senses. For this reason, three different art forms are combined in my art."

Sula is an established artist who has opened numerous exhibitions in countries around the world. According to Sula, there are four types of people at his exhibitions.

"The first looks without making anything of it and leaves, because I am working in the abstract. Another turns to her husband and says, this painting would look perfect with the salon set we just bought. Some come and think, and others cry."

As Sula explained, the first type two types of visitors do not open their hearts enough to see the meaning of his art. "They just look and leave," he said. The third type think about the pieces and try to find meaning in them.

"The fourth one is those who look with their hearts," Sula said.

"I write and paint things that will appeal to hearts. Some tell me that my work is very traditional, asking me why I don't paint contemporary paintings. My assertion is that I am the son of an ancient civilization, 2,500 years old. I am a child of Anatolia. I am intertwined with this land. My civilization is a high civilization. I have complete self-confidence and no complexes. That is why God has granted me the ability to bring these three different art forms together and exhibit them. I want to ingrain this self-confidence and consciousness in young people to revive this civilization, to try to resurrect it and to be instrumental in this."

But does Sula get upset because of the people who just look at his art at exhibitions?

"Let me explain with an example. One day I went to Hacıbayram Mosque for prayer and there were a few people in the community. I looked at the walls of the mosque and the engravings on them, imagining what those stones might have heard and picturing the people who came and went. Then I called out to myself: Oh craftsman! You draw and call people to beauty. Those who want will come, those who will not have already gone. See, the calls to prayer are doing the same thing. Will the temples remaining empty pity their fate, or the people who leave the temples empty?'"

Throughout his career, Sula has stood against all terrorist organizations, including FETÖ, which also plotted against Sula himself. He was among the group of police officers who were discarded by FETÖ members to open vacancies in important positions for their own. However, Sula said there are far worse cases of people victimized by FETÖ.

"For me, that period was the most difficult period in the history of Turkish Islam. Thanks to the firm stance of President Recep Tayyip Erdoğan, a great struggle has begun. They were in every field, so a struggle is needed in every field. That is why this struggle is the duty of each one of us. It is a matter of a nation, of region, or even of humanity, and I feel lucky to have authority here. It is a great blessing for my own behalf. Today, if we can explain these things well to our people, we understand that this idea is not in accordance with our customs, morals, virtues and beliefs and we fight together accordingly. We will have to continue until the end as long as this struggle lasts, because our future is in question," Sula said.

Recalling the police station crawling with FETÖ members, Sula said that they were all lackeys. "They were low types gossiping in the corners," he said.

"I have served in the police force for 35 years. I have seen enough of the evil face of life from a window that many artists have not seen. I worked mostly in intelligence and counterterrorism units. Both a cop in counterterrorism and an artist, how contrary, people are surprised. They ask a parent from whom he has learned good moral values, and he says from the bad people, and I respond to them. That is why the important thing is to look at things with wisdom. For this reason, God has given me such a past to be able to say these things in this age and at this rank so that what I say has more impact."