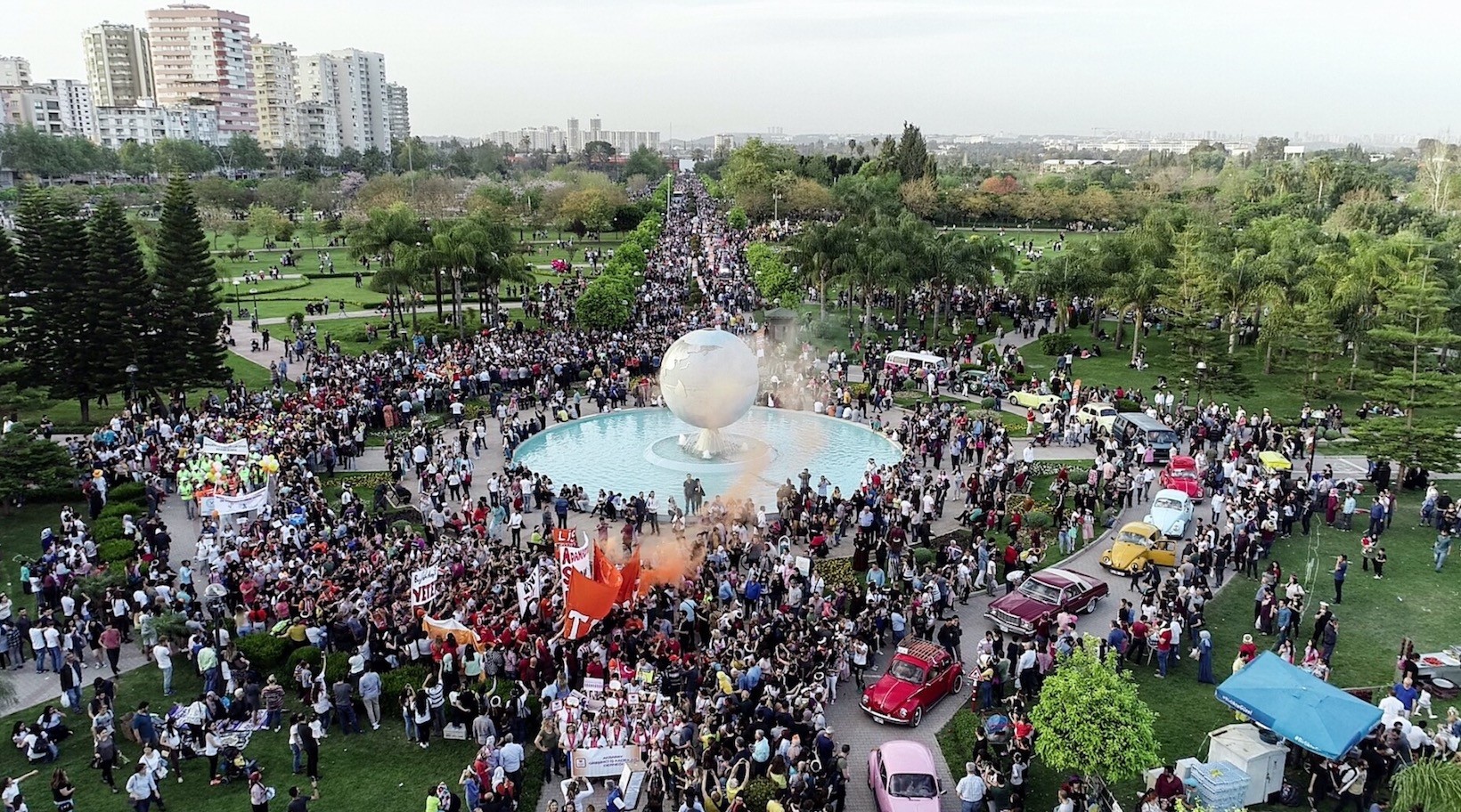 The sixth the Orange Blossom Carnival closed with the attendance of thousands in the main square of the city of Adana.
by Jurgens Klaus Apr 11, 2018 12:00 am

After six years, the Orange Blossom Carnival in Adana has transformed into a mega event, becoming a part of the southern province of Adana, and it seems that the carnival will continue to grow and attract hundreds of thousands to the city for years to come

Think about a mega event full of entertainment and imagine that it takes place in the southern province of Adana. Well, it is actually happening. Over 100,000 people attended this year's Orange Blossom Carnival in this charming, enterprising metropolis in southern Turkey. It was the sixth edition of what by now has become a fixed item on the city's calendar, and judging by what one was able to see and experience while there, it continues to grow year after year.

So what is an Adana-style carnival? With more than 100 activities attracting visitors from near and afar, including Europe and much further afield, and of course from all around Turkey, you would not need to worry about what to do during your four-day stay. Yet it is probably fair to say that last Saturday, April 7 was the absolute icing on the cake.

To begin with, there was a street parade with music, dancers, car aficionados, charities, youth groups, dancers, performers, you name it. Above all else, everyone took great pride in showing off their fancy costumes specifically made for this big day. All of this fun, taking part yourself, watching or walking alongside the parade to be as close to the action as possible was followed by an open-air concert. By the group Kıraç. And of course there was the official opening ceremony so perfectly placed in between the two major activities mentioned above.

Protocol is often a rather dry part of any huge event, but even this is totally different over here. The organizers made sure that not only invited guests, but the entire public was made to feel welcome as an integral part of the carnival. Adana Mayor Hüseyin Sözlü addressed the audience in a much-applauded speech on the relevance of both the city, and Ali Haydar Bozkurt, a much-admired personality whom most would describe as the original father of their carnival.

The other activities during the four days would not pale by comparison with a view to quality or craftsmanship - far from it - they were simply somewhat smaller in size and design so as to squeeze in as many highlights as possible. There was art and culture, sports, music, food, handicrafts and literature. It is almost impossible to list all the different types of events in such a brief overview.

But if one would expect that this was just another isolated event, please let me explain that nothing could be further from the truth. The team around Bozkurt knows very well that there is a much wider dimension attached that brings a stimulus to the local economy, which supports the city's tourism development and, last not least, puts Adana even more firmly on the country and Europe's mega-event map.

Daily Sabah had the absolute pleasure to talk face to face with Bozkurt and we learned that according to him a dream had come true indeed. From modest beginnings six years ago, the carnival turned into a very large affair and would easily compete with the top 20 of world tourism mega-events, for example Germany's Oktoberfest or other well-known festivals. Bozkurt stressed the cosmopolitan nature of both the carnival and the city. What is quite remarkable, too, is that the event is a real civil society venture, as none of the organizers around him would take any money for their hard work. In his words, the Orange Blossom Carnival should be a weekend of fun and peace and mutual sharing and enjoyment.

I recalled a previous meeting when we had a chance to talk about all things carnival. Four years ago there were only a limited number of street stalls and vendors lining the city center, so we had met outside a restaurant and he told me that his hope was to turn the carnival into a permanent institution, a permanent fixture. This year, in 2018, there was hardly enough space anywhere in the city center to talk in private as it was totally filled with carnival goers. It is an amazing development based on three things.

First, Turkish civil society is not simply alive and well but outperforms itself year in year out, and Adana as a case in point. Bozkurt and his team tapped into this so typical Turkish spirit of sharing, enjoying, partying, meeting and mingling with folk from around the neighborhood or around the world.

Second, you of course need sponsors and financial s

upport, and this is what has materialized over the past six years.

Third, you need an encouraging local and regional administration and, once again, one does not needs to look any further than Adana. All political views, directions, movements unite to hold the annual carnival.

It shows how mutual understanding, respect and sympathy for each other can help to transform a city into a peace hub, an event destination, a mega-event hub, so to speak.

I will soon write about city management and the importance of agriculture for the region, but let me only stress that Adana and its region taken together with Mersin are Turkey's most important orange producers with well over 50 percent of national production.

So there is fun, but there is that serious carnival dimension, too, of stimulating local entrepreneurs and farmers, creating awareness about the importance of oranges.

Something all visitors will surely have realized while in Adana either as a guest or as a local is that the carnival sets trends with a view to show everyone who sometimes complains about modern Turkey that a large-scale event runs smoothly and that neither this year nor on any previous occasion was there ever any incidence. No rowdiness, no verbal or other attacks and everyone behaves in the good-natured spirit of a typical Turkish social gathering. The Adana Orange Blossom Carnival should be on the calendar for all foreign journalists in Turkey, too. It helps to understand the sheer goodwill spirit of Turkey and its proud inhabitants.

Will there be a seventh edition? According to Bozkurt, there will be for sure. Can it grow anymo

re? This depends, and seen from a commentator's perspective, it is probably attracting an ever-increasing number of visitors. One could imagine that there is not only a seventh edition of the carnival but a 17th, 27th and many more.

"Nisan'da Adana'da" is the catchy slogan, rather loosely and not translated word for word, one could say "when it its April, it must be Adana." I would add with all modesty, when it is the Orange Blossom Carnival, it is the best of Turkish hospitality, too.