Praying for the Vietnam Syndrome 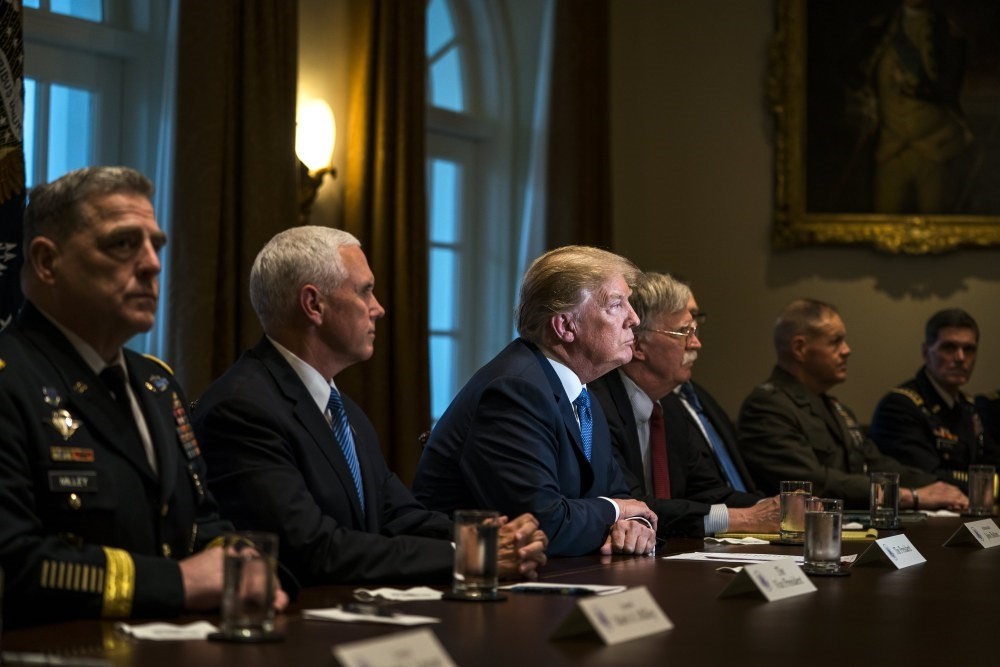 U.S. President Donald J. Trump (C) speaks with the media before a meeting with his military leadership in the Cabinet Room of the White House, Washington, April 9, 2018.
by Jane Louise Kandur Apr 14, 2018 12:00 am

In an unprecedented move U.S. President Donald Trump has tweeted that missiles will be coming to Russia. The president is not only warning an enemy that it will be attacked, he is doing so via a tweet - international relations have gone mad

The tweet is juvenile, even childish. It is taunting and rather offensive, "Get ready Russia, because they will be coming, nice and new and ‘smart!'" Trump tweeted.

Russia answered that any U.S. missiles launched towards Syria will be shot down. If the U.S. Navy destroyer that is headed to the eastern Mediterranean is attacked by Russian missiles, the way forward looks grim.

Add to this the frightening scenario that France and the U.K. are making noises about supporting any probable strike by the U.S. British Prime Minister Theresa May claims that the chemical attack in Syria cannot go unanswered.

Yet recent history in both the U.S. and the U.K. demonstrate that it might not be that easy to start an actual campaign against Syria's ruler, and as a result, against Russia.

In 2013, then British Prime Minister David Cameron, recalled MPs from summer recess. After a debate, the government motion to take military action against President Assad was defeated. Thirty MPs defected from the Conservative party line and voted against their own prime minister. This disaster is in living memory, and it is highly likely that Theresa May is very aware of the mistakes Cameron made.

Yet in both countries in earlier history votes like this have succeeded. These successful votes were held after airstrikes were carried out. That is, the vote was held to confirm action already taken.

Congress will not be keen to embroil the U.S. in any military action. Launching missiles, if there will be no recourse, would be no problem. But Russia has promised that it will retaliate. There is a possibility that matters in the region will quickly escalate, and the U.S. might find itself in another Afghanistan, a war it has not yet managed to extricate itself from.

While Americans will not hesitate to declare that anyone using chemical weapons, which indiscriminately inflict a painful death on men, women and children, should be held accountable, they will hesitate if the action will lead to a drawn-out messy war. And Russia has basically promised that this is what will happen.

During the Iraq invasion, then U.S. President Bush made claims that the Vietnam Syndrome had been defeated. But the Vietnam Syndrome must still be in people's minds. No matter the saber rattling of "war on terrorism," and railing at dictators, who use chemical weapons to kill innocent children and women; the American people should remember the debacle of the Vietnam War. Afghanistan has been accepted by the people because it has been low-key, drawn out and far from the public eye.

But any contretemps with Russia will not be low-key nor far from the public eye. The people of both the U.K. and the U.S. will not be keen to start a war in a land that is once again far away and does

n't directly involve them, or so one would hope.

The Vietnam syndrome is not a medical syndrome; rather it has a purely political meaning. The phrase was coined by Henry Kissinger and Ronald Reagan used it when discussing the reluctance of the American population and the Congress to send troops to wars that were far away and really none of America's business.

Vietnam was a disaster for the U.S. government. Although undertaken, it was claimed, to defend world freedom and democracy against the Communists, the American public soon became concerned, then angry. This military action, which lasted more than 20 years, was never officially referred to as a war; indeed, no military conflict since World War II has been referred to as a war. Yet thousands and thousands of young men came home from Vietnam in body bags. Not to mention the millions of Vietnamese who lost their lives. The horrific images that were published in the media helped to bring home that this was, whatever the government wanted to call it, a war. And it was a war in a country that was thousands and thousands of miles from home, and a war that had nothing to do with America.

The American people protested against the Vietnam War. They were angry. Being a soldier was no longer seen as heroic because they were not fighting to defend America. Fighting in the army was no longer a lofty goal. With increasing public pressure, the U.S. pulled out of Vietnam.

And then came 9/11. The war on terrorism was declared. Now the American soldier had something real to fight. "Terrorists." Being a soldier was heroic as they were now defending their homeland. The army was the only institution able to protect America against terrorist attacks.

George Bush (the senior) declared: "By God, we've kicked the Vietnam syndrome once and for all!" at the end of the first Gulf War.

The strange thing about the war on terror is that this terror has had a greater toll on Europe, including Turkey, than on the U.S. Yet the U.S. is still putting itself in the position of defender of freedom, democracy and all that goes along with these ideals. It drags a rather unwilling Europe behind it. And this stance forces Iran and Russia, rather unlikely allies on the face of it, to take up the opposing position.

After 9/11, as part of the war on terror, America invaded Afghanistan. And there they have remained, despite the advice of General Colin Powell, who served as chairman of the Joint Chiefs of Staff and Secretary of State. Powell had served in Vietnam, and in order to avoid getting into such a quagmire again he set out some criteria. These criteria, known as the Powell Doctrine, advised being involved in a war only if there was a vital interest to the U.S., only if there were achievable purposes, only if the U.S. was prepared to use decisive force and have an exit strategy. Very sound advice which was, unsurprisingly, totally ignored.

Some military actions, small and large, since Vietnam instilled the American people with more confidence in their troops. They were able to go in and get out, be it in Grenada, Panama, Serbia or Iraq during the first Gulf War.

But Afghanistan and the Second Gulf War have made the Americans and their allies wary once again.

Under President Bush, criticism of intervention in the Gulf was seen as unpatriotic. But with the Obama administration, more caution was introduced, and the people and Congress were wary of punishing Assad for any chemical attacks.

Trump's tweet has thrown this caution to the wind. May is ignoring the British aversion to being involved in more Middle Eastern adventures led by the gung-ho Americans. Yet, Tony Blair's blithe dismissal of the British public opinion still lingers in the British mind.

The Iraq War was a disaster for all involved. It was a war of aggression; it was "an unprovoked use of armed force against a sovereign state in a situation other than self-defense. The Nuremberg and Tokyo War Crimes Tribunals ... declared such aggressive warfare to be a "crime against peace" and prosecuted and punished surviving political and military leaders of Germany and Japan as war criminals."

It seems that there is one thing that a leader must do in order not to be prosecuted as a war criminal - win or lose - they must emerge as a world power. Then they are safe from having to answer for their own particular crimes.

Trump's outrage has been backed up the U.S. ambassador to the United Nations, Nikki Haley. Talking about images of children foaming at the mouth, dying in a chemical attack, Haley said, "Russia cannot escape responsibility for this ... how many more children have to die before Russia cares?"

She went on to say, "When the U.N. consistently fails in its duty to act collectively, there are times in the life of states that we are compelled to take our own action."

America has decided once again to be the policeman for the world. Obama was outraged by Syria's use of chemical weapons on a civilian population. That was a red line for him. But he knew the risks of reacting, and a series of intense negotiations and horse-trading occurred, making it possible for America to avoid taking direct action.

Chemical weapons are a red line for the entire U.S., but this makes it easy to overlook thousands and thousands of innocent civilians have lost their lives due to barrel bombs, carpet bombing and simple old-fashioned gunfire. There are so many red lines being crossed in Syria every day

Trump has already launched missile strikes against the Syrian regime. They have been successful and welcomed by the American public. Around 57 percent of the American public support airstrikes in Syria while some 63 percent thinks America should do more to end the conflict in Syria. Americans trust Trump to be able to do this. But less than 40 percent of Americans would support U.S. ground troops being sent in against the Assad regime.

It seems that the U.S. is looking for a reason to punch Russia on the nose. Perhaps Trump thinks this will deflect those who are accusing him of having colluded with Russia to steal the election. The next few weeks will show what way America and her European allies choose to go. But Russia and Iran have made it clear. Whatever way Trump chooses to go Putin will choose the opposite. Assad should be punished. But this should be done internationally, not unilaterally by a country that has bred chaos throughout the Middle East. The American public should reawaken the dormant Vietnam Syndrome, and try to steer Trump away from starting yet another Middle Eastern war that they cannot win.