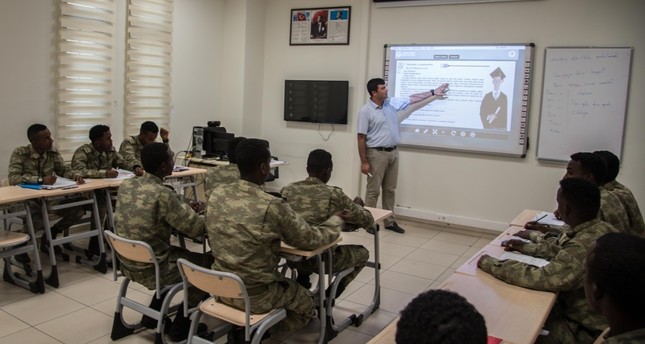 Apart from military training, Somali soldiers are also taught Turkish throughout the program.

Dragged into a civil war that has been ongoing for the last 30 years, Somalia is trying to get back on its feet and the Turkish Armed Forces' training base in Mogadishu brings them one step closer to re-establishing security in the country

"I came here to make a difference," Ismail, 19, said in fairly good Turkish. He has been trained and educated at the Turkish military training base in the Somali capital of Mogadishu for the past couple of months.

Mogadishu is indeed a capital where people tend to make a difference in their military ability rather than education since one is simply compelled to make a choice to take up arms or not as a teenager.

In the 1970s, the city was indisputably a fierce competitor along with European capitals in the race for beauty, tourism and architecture. Agriculture was flourishing, the city was drawing visitors from all over the world and the most importantly, a state existed.

Somalia drastically took a turn for the worse in the early 1990s. Mohamed Siad Barre had been sitting in the drivers seat in Somalia since 1969, but 1991 marked his forceful exit. Few had predicted at the time that his departure would drag Somalia into decades of uncertainty, calamity and lead to the collapse of the state.

The United Nations swiftly embarked on a peace-seeking operation to wrap up the inter-clan wars following Barre's ouster, which failed. Furthermore, the country served as a scene for the United States as the administration of U.S. President George H. W. Bush jumped into an overseas military adventure.

A couple weeks after the deployment of U.S. troops to Somalia, Bill Clinton took office as president. U.S. soldiers returned to the United States a couple years later following a deplorable mission.

That was it. The people of Somalia were knee-deep in a civil war. In fact, nobody today dares assume that it is over. The country is reeling under deadly bombings and the fear of al-Shabaab, a notorious terrorist group.

In such an environment where the country has a de-facto non-existent state with a military whose authority is little if any, the training base set up by the Turkish Armed Forces (TSK) in the Somali capital sends a bold message. 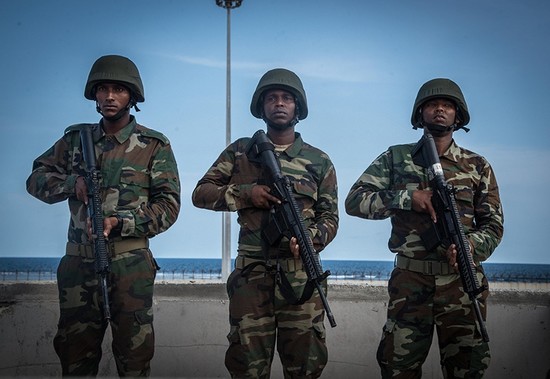 Commander of the Turkish Military Training Base, Staff Col. Mehmet Yasin Kalın, believes then Prime Minister Recep Tayyip Erdoğan's visit to Somalia in 2011 set a precedent. The Turkish government has been mobilizing all state and non-state institutions to pour in humanitarian aid and development projects for the country. Kalın said the military training base is only complementary to Turkey's humanitarian work in Somalia.

In a decades-long, failed state where most developed countries shy away from opening embassies or posting diplomats, the Turkish state has unveiled its biggest and most notable embassy two years ago in Mogadishu, and last year the Turkish military training base was inaugurated. Some $100 million was reportedly spent for the two complexes.

A grand gate built in old Turkish architectural style with "Anatolian Barracks" inscribed on it welcomes visitors to the base. Sitting on a vast area, the base is head spinning. The money and effort invested in the facility sparks the impression that Turkey means business in Somalia.

"Somalia has been in a civil war for 30 years. The country has been plundered and all systems have been toppled. Even people's mentality and beliefs were shaken. It has become an ungovernable country. We are here to contribute to the advancement of Somalia in the field of armed forces," said Kalın as he argued in favor of the presence of the Turkish military in a foreign country. "We are doing our best to help our Somali brothers and sisters in terms of restructuring, equipping and training the Somali armed forces."

The Somali military needs dramatic restructuring. Though one cannot speak of a unified and disciplined military, tens of thousands of people are enrolled and armed. On the streets, however, the picture is eerie for a foreigner. People strive to feel safe to an extent with private soldiers patrolling and escorting for them. 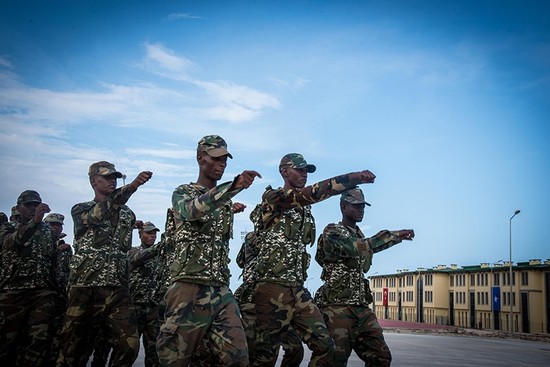 As the Turkish military seems fairly content with training Somali troops in their country, the level of satisfaction is even greater on the other side. The Somali commander of the military academy, Col. Abduquadir Ibraahim Isack, is overjoyed about the facility and the training offered to the Somali soldiers.

"It is training at the international level. We have not been blessed with such an opportunity for the past 27 years," he said, adding that such a military training barracks does not exist in Kenya, Tanzania or Ethiopia.

In one of the classes, around 20 Somali troops sit in separate booths with their headsets on. They listen to a track that the lecturer plays. It is actually a conversation in Turkish. The troops are taught Turkish throughout their training program at the base by the Yunus Emre Institute (YEE). Most Somali troops grasp and speak the language well enough toward the end of the program.

Having started operating in 2009, the YEE has more than 50 offices abroad. In addition to the Turkish education offered in cultural centers similar to the one at the base in Mogadishu, the institute promotes Turkish culture and engages in different activities with partners across the world.​ 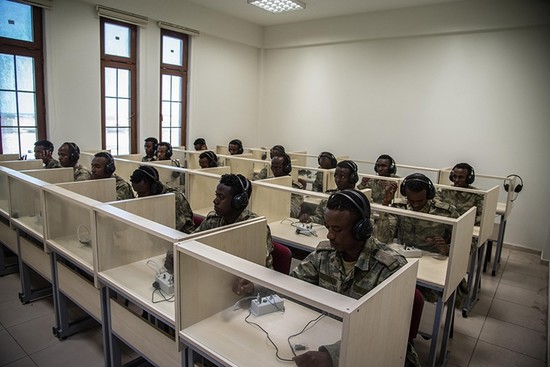 Ismail, who has been receiving the language classes for less than three months, said learning Turkish is the simplest way of communicating with the Turkish commanders. "We did not speak a single word in Turkish, but now that we can, right now we have forged a decent dialogue channel with the commanders. We can convey our issues and problems easily now," he said.

On April 10, the second batch of Somali soldiers graduated from the academy since its inauguration on Sept. 30, 2017. The troops were proud. Having arrived at the facility without any serious military discipline or training, they have now made the difference in comparison to their peers.

The third group of troops is expected to begin training in the upcoming weeks. The Turkish military plans to graduate at least a battalion by the end of this summer. All the equipment and wages are also provided by the TSK, even after graduation.

It has been some eight months since the launch of the military base, yet some people still have doubts about the intentions of the Turkish government. While some fear a Turkish expansion across Africa with a foothold in Somalia, others speculate that the Turkish forces have arrived to remain there forever.

Kalın laughs off the allegations, citing deep ties with the people of Somalia going back to the 16th century. He said that the troops trained there would contribute to the secure environment in the country. "Security will usher in stability. Turkey is sowing the seeds of it now."

The commander also brushes off criticism of colonialism. The Turkish and Somali governments signed an agreement for the military training project. It enables the Turkish military to provide training to Somali troops for five years if it is not renewed. Kalın refuses to set an exact date for the withdrawal of Turkish troops from the country. "As long as the people of Somalia need us and we are able to meet their needs, I think we will be here," he said. 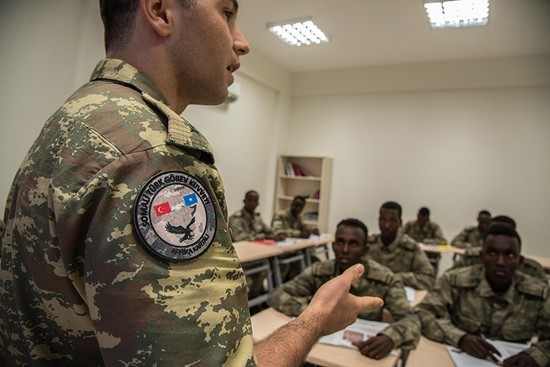 The withdrawal of the Turkish military does not even cross the minds of Somali soldiers. Ismail said the Turkish-Somali project will be a positive. "I believe 100 percent that we will change many things here. We will overcome security challenges," he said. Kalın asserted he would be satisfied in the end if Somalis only said: "May God be pleased with you," and lived under humane conditions in peace.

It remains unknown whether the program will be a success in the long term, but the series of Turkish initiatives and concrete steps for the sake of the people of Somalia seems to have won over those involved.

Col. Isack is of a similar opinion: "We are not friends with Turkey, we are brothers."

Share on Facebook Share on Twitter
Previous in Feature Catalans lost their principality when the Crown of Aragon, established... Next in Feature In an unprecedented move U.S. President Donald Trump has tweeted that...
DAILY SABAH RECOMMENDS