Peace, a long and complicated process 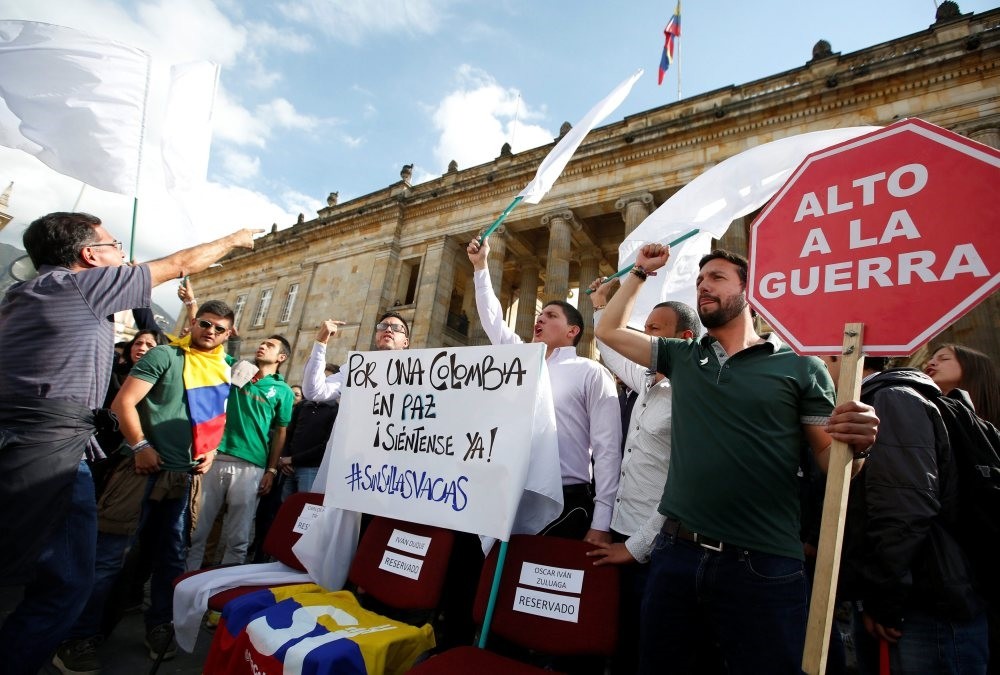 University students and supporters of the peace deal signed between the government and FARC rebels protest during a rally in front of congress in Bogota, Colombia, Oct. 3, 2016. The sign reads, u201cFor a Colombia in peace, sit here.u201d
by Jane Louise Kandur
May 01, 2018 12:00 am

It might seem an odd and even inappropriate time to convene a round table of Turkish journalists and experts in the media to discuss what role the media should adopt in conflict resolution. Yet, as a part of the larger conversation supporting inclusive dialogue at a challenging time in Turkey, which the Democratic Progress Institute (DPI) is conducting with people from a variety of areas, this conversation actually could not be timelier.

In a hotel conference room in central Oslo, journalists who had covered or been involved in conflict resolution from Colombia and Norway addressed a dozen or so journalists and media experts from Turkey. The Turkish contingent came from a variety of papers - right, left, central, national or papers with a more communal or local readership. Everyone was there for one purpose. To learn how responsible journalists can play a constructive role in conflict resolution.

That is, all differences were set aside. Of course, there were sardonic or bitter comments thrown out about the state of journalism in Turkey. This was only to be expected. When a country is going through challenging times, there will be those who are negatively affected. This is a sad truth, but one that is also apparent in many Western countries today, countries who are also facing their own challenging times.

But this is not an article that justifies or criticizes the situation many journalists find themselves in Turkey today. Both the positive and negative sides of the situation have been discussed in many different English-language publications. Justifications and the accusations have also been discussed. There is no need to repeat them here.

No. Today the focus is the future, a future where hope will start to blossom and grow, and a future where once again Turkey can make great and rapid progress on the road of democracy and human rights. There has been a delay in this journey. Obstacles have appeared in the road and diversions have been taken. Yet, with the conviction that these are merely diversions and that there will be a real possibility to return to the path of greater democracy and freedom, the conversation on the role of the media in conflict resolution was emboldening and enlightening.

The conversation started with an introduction by Kerim Yıldız, the chief executive officer of the DPI. One sentence Mr. Yıldız uttered was particularly striking: "Turkey does not need to start the resolution process from scratch."

No, the resolution process had been started but had to be abandoned for a number of reasons. Then other events, including a failed coup attempt, took place. The resolution process may seem in the distant past, but in reality it was less than three years ago that it all started to fall apart.

The opinion of some journalists at the round table was that from June 25, 2018, that there could be a renewed but cautious will to restart the resolution process. After this date, the new presidential system will be in place, and things may start to progress on a more even keel than before. If this is the case, then there really seems no reason to prevent talks about starting up the resolution process. 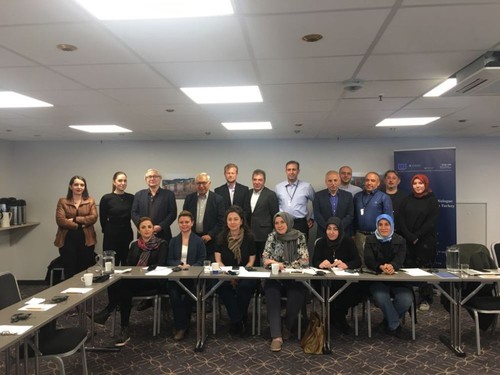 Journalists who attended to the meeting held in Oslo by the Democratic Progress Institute pose for the cameras at the end of the meeting.

There is another matter which also gives hope for more positive progress in the future. Recent actions taken by the Turkish military against the PKK and their affiliates have a close correlation with events in Colombia leading up to the peace talks. The Colombian government was able to finally convince the Revolutionary Armed Forces of Columbia (FARC) to talk about peace only because the state had military weakened its opponent.

John Jairo Ocampo, former press secretary for the Colombian Government, addressed the group about the peace process in Colombia. As a witness and participant in the peace talks, he was able to provide interesting insights into the process.

During the conflict in Colombia newspapers were often directly targeted. In the middle of the last century, the newspaper El Espectador, established in 1887, was attacked and forced to close down. At the end of the century, the FARC, other paramilitaries and the drug cartels started a new kind of warfare. Journalists and political candidates were now being kidnapped or murdered by car bombs.

The Colombian government constantly fought back against FARC's violence and the drug cartels. In 1993, Pablo Escobar was killed. This was the beginning of the end of the conflict. Talks began but were called off when the FARC hijacked a plane and kidnapped a senator in 2002. But a beginning had been made. Ten years later, official talks with the FARC and other groups began, and finally a resolution was achieved four years later.

What brought the FARC to the table? How were they convinced that they should transform their weapons into plowshares? The answer is stated above and is very simple.

Their military capacity had been severely weakened. The Colombian government had infiltrated the FARC. One of their leaders, Victor Julio Suarez (Mono Jojoy), commander of the eastern bloc of the FARC suffered from diabetes. He had serious problems with his feet due to his diabetes. He was given a special pair of orthopedic boots. What Suarez did not know was that a special chip had been planted in the boots. This chip helped the government track Suarez down. In 2010, Suarez died in an air raid. By weakening the FARC and taking out some of the leaders, the Colombian government opened the way for peace talks. The FARC realized that there were few options left and that peace talks would not only allow them to put down their weapons and remain alive, but would also let them have a say in what would happen in Colombia's future.

The stipulation was that if the guerrillas and paramilitary soldiers relinquished their weapons and told the truth about what they had done, they could avoid prison time. They would be punished, but the punishment would consist of community service, working in agriculture, clearing mines, etc.

However, all this is not to say that peace in Colombia has been guaranteed. Many of the paramilitaries have gone into drug trafficking to make money. Many drug cartels are still active. Just last month, another paramilitary group, the National Liberation Army (ELN), was called back to the table to renew talks.

The journalist who spoke to the group about the Northern Ireland peace process, Owen Bowcott, provided a different aspect of how journalism should operate during peace processes. Even though Ocampo had commented that for newspapers it is easier to promote conflict than peace, as conflict sells more papers, Bowcott focused on the journalist's role in revealing the reality on the ground to the reading public. A journalist should try to bring out the real reasons for conflict, and if the government, operating as the police or military, oversteps the bounds of morality, it is the journalist's duty to reveal this. And when the other sides - call them rebels, terrorists or what you will - overstep the bounds, it once again falls to the journalist to reveal this. The journalist's role is to report the facts. In peace talks, the journalist must listen to what the people - not the leaders - really want. It is their duty to bring this to the attention of the people, and as a result, to the attention of the leaders.

None of this means that the processes in Colombia or Northern Ireland are mirrors of the situation in Turkey. Every conflict is different. What players demand or need is different and the history, impetus and driving forces are different.

But what did become clear is that politicians, journalists and nongovernmental organizations (NGOs) can learn from the peace processes in other countries. They can learn from the mistakes, and adopt the best practices where appropriate. The advantage of learning from other countries that have gone through similar processes is clear. When the Northern Irish or Colombian processes are examined, it is clear that they took years and encountered numerous setbacks. Talks were often completely cancelled only to be restarted a number of years later. After all, this is a process, not an event. A process implies developments, setbacks and advances. Turkey has the advantage that perhaps it is in the middle of its own peace process. Although the earlier resolution process was short lived, it was there and it is possible to learn a great deal from it and to build on it.

The most important lesson for any future peace talks in Turkey is that neither the Colombian nor the Northern Irish peace talks have been completed. In neither country is it possible to say that everyone has left their grievances behind and are now focusing on the future. In Colombia, the ELN is still involved in peace talks, and there are other paramilitary forces that still have not come to the table, not to mention the drug cartels. In Ireland, Brexit is threatening to open up new, barely healed wounds. If a hard border, even if it is one manned with only cameras, is erected in Armagh, this will act as a red flag to the populace. It is more than likely that anything erected will be destroyed. This could be the first step down a slippery slope. The wounds are too fresh. It is highly possible for things to slide back to how they were. Add to this the fact that the two opposing leaders, Martin McGuinness and Ian Paisley, two men who made peace possible, are no longer with us. Without these two determined leaders, it might be harder to continue what is actually a not so easy peace.

Colombia, with only two private channels and five national newspapers, did not have a great challenge in getting reporters to play positive roles. Reporters basically followed the government line, while most television channels preferred to broadcast telenovela or game shows.

And not every British newspaper reported events with an eye to a peaceful future. One needs only examine how the Sun and Daily Mail reported McGuinness' death in March of this year. Daily Mail merely printed two photos of the aftermath of Irish Republican Army's (IRA) bombs, one in Guildford and one in Enniskillen. The message was clear. The Sun took a less subtle approach. The headline under the photo of McGuinness read "UNFORGIVEN." Under the bold letter title, the article started "IRA killer can go to hell ... ."

After June 24, the political situation in Turkey may change. This will perhaps be the best time to pick up the resolution process and bring relief to parts of the country that suffer due to the activities of the PKK and its associates. It can only be hoped that journalists in Turkey will step up to the challenge rather than trying to sell newspapers with sensationalist headlines and that they report the situation to help the people understand what is at stake. The polarization in Turkey is to a large extent fanned and fed by the media. An opportunity for the media to reverse this process and play a healing and unifying role may soon appear. It will be an interesting time to be a journalist in Turkey and to watch how things unfold.