Defying the tides of misfortune, migrant babies born at sea 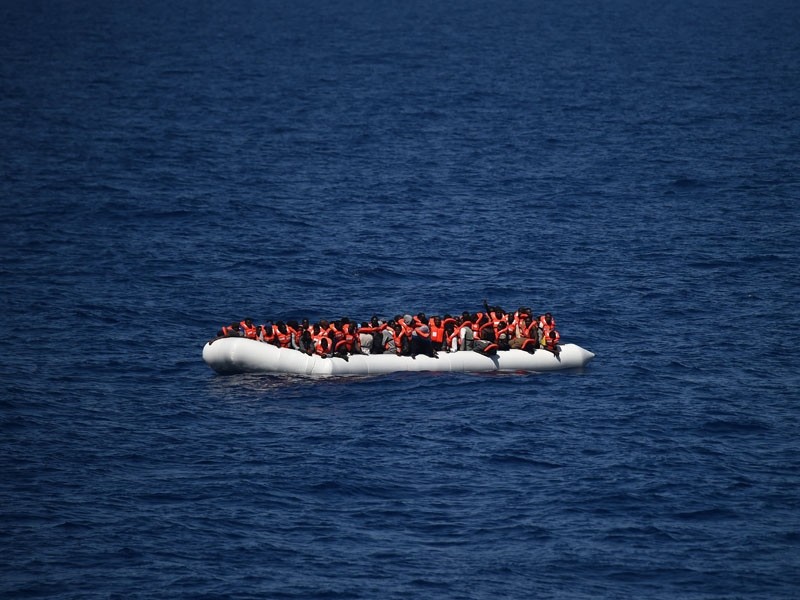 Refugees from Africa, Asia and the Middle East still continue their journey of hope for a better life, trying to cross the Mediterranean and landing in Europe, but among them, there are those who have no choice in that matter: The unborn babies

Mercy, Francesca, Newman, Diabam and Sophia were the names their mothers chose. What they had no control over was where their babies were born.

As hundreds of thousands of migrants risk their lives on the perilous sea crossing from North Africa to Europe, dozens of newborns have taken their first breath aboard rescue ships in recent years.

"There were a lot of people in the rubber boat, we were all packed together... the pain was awful," said Stephanie, a Nigerian woman who gave birth to Francesca aboard an aid boat.

There are many elements of a tortuous sea crossing that can push pregnant women travelling aboard crammed vessels into labor - stress, the vibration of boat engines, even the relief of being rescued from danger.

But the chance of a woman having to give birth on the perilous voyage is ultimately a question of numbers.

Since 2014, almost 80,000 women have landed on Italian shores, not including adolescents.

The majority of them are young and many are pregnant.

"I've met many women who were raped," said Marina Kojima, a Japanese midwife who spent several months aboard the Aquarius, a rescue ship jointly run by NGOs SOS Mediterranean and Doctors Without Borders (MSF).

"Often they have to sell their bodies in order to get a place on the boat." For these women, pregnancy makes the perilous journey through the desert into hellish Libya even more difficult, and giving birth at sea can be a scarring experience.

"We barely had time to realize what was happening and after just 45 minutes a little boy was born," said the 26-year-old.

"I was working on autopilot. Just trying to do my best for the patients, we didn't sleep for two days."

Marinig reckons there were around 30 other heavily pregnant mothers on board the Dattilo, and a number of women carried babies in their arms they had recently given birth to in Libyan detention centers.

Even if their birthing suites amounted to the ship's hard floors with plastic crates as cots, the successful deliveries that night brought a shimmer of light to a dark two days - 10,500 migrants had been picked up in the Mediterranean and a total of 50 corpses discovered.

For relief workers, delivering newborns alive and healthy is such a powerful experience that the European Union re-baptized its anti-trafficking operation in the Mediterranean Sophia in tribute to a Somali girl born in August 2015 on a German ship.

A baby born aboard the Aquarius in 2017 became the inspiration behind this year's French Eurovision entry, simply called "Mercy."

And the tributes go both ways.

Stephanie chose to name her girl Francesca after Pope Francis while little Desire Alex, born on the NGO boat Aquarius in 2016, was named after the ship's captain.

But even if the 35 babies born aboard Mediterranean rescue vessels in recent years defy the odds to make it safely to Europe, their ordeal is just getting started.

According to maritime law, children born at sea are considered nationals of the ship's flag carrier: Italy for Francesca, Germany for Sophia, the United Kingdom for Mercy. But in these countries, restrictive citizenship laws mean the babies are not entitled to a European passport.

Upon arrival in Italy, their unusual birth affords them no special treatment and they often get lost among the masses. Mercy and her mother were taken to Mineo reception center in Sicily, the largest in Europe and long dogged by scandals of embezzlement and trafficking.

It still houses nearly 3,000 people who sometimes wait years for an answer to their asylum applications.

Little Francesca, and two others, Newman and Favor, born on the Aquarius in 2016, were luckier: their parents were taken in by smaller centers which offered legal support, Italian courses and independent accommodation.

On the advice of German sailors, Sophia's mother continued her journey and was granted asylum in Germany.

They all share the same hope: that their children can go to school and grow up to live a life less precarious than their birth.