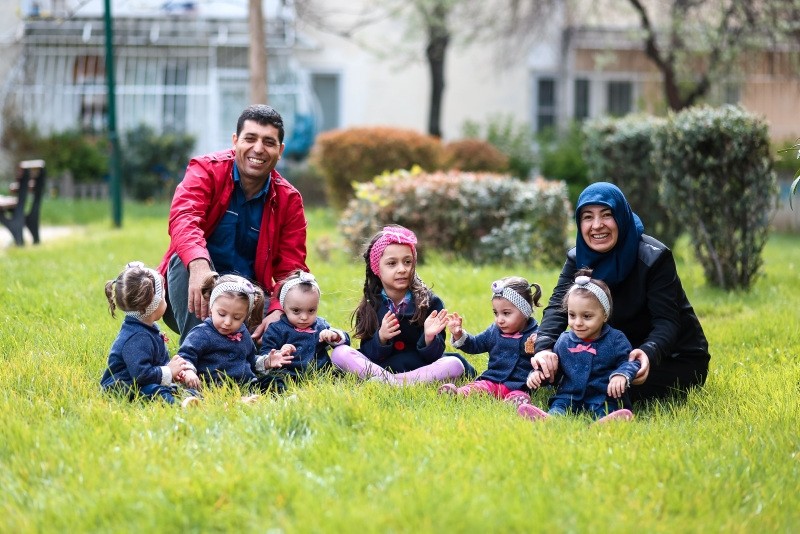 The quintuplets together with their elder sister and parents.
by Damla Kayayerli May 14, 2018 12:00 am

Turkey's miracle quintuplets, who were born healthy despite serious health risks during pregnancy, are nearly two-years-old

We left for Osmangazi district in Bursa province to visit the second quintuplets in Turkey. As soon as we entered their houses, six girls who were very curious and cute welcomed us. The quintuplets surrounded us and started to observe. After a while, they became lost in their games, and we had the chance to move into a deep conversation with their parents, the Yılmaz couple. The couple is from Ağrı province. Hatice is a primary school graduate and housewife. Her husband Fatih was a member of a crowded family of eight. He earned his money by his own efforts. He was a car mechanic in Ağrı for years. The couple, which yearned for a child for years after they got married, never lost hope. They started a treatment to have a child. This is why they came from Ağrı to Istanbul. They also saw the doctors working in nearby cities.

After five years, they had their first baby and named her Ecrin. They did not want their daughter to be alone, and after some three years, they started the treatment process again to have another child, a sibling to Ecrin. When Hatice conceived a baby again, the couple felt really happy. However, they were shocked when the mother went to the doctor for a control when she was two-months pregnant. The doctor said she would bear sextuplets. Hatice said that she knew of twins or triplets but had never heard of sextuplets. "I could not believe at first," she said. The doctor implied she should have an abortion.

As her husband was at work, she was alone at the doctor's office. She informed her husband immediately. Fatih objected to the abortion, and they went to Erzurum province. However, the doctor there said the same thing: "You should have your children aborted as they could not live." This was how they decided to do it. However, Hatice's sense of motherhood embraced her when she looked her children on the monitor for the first time. She could not have an abortion even if there was a life threat. Her husband also wanted to struggle to keep them alive. She had a dangerous pregnancy and miscarried one of the babies, as well. She tried to be careful during this period under her doctor's supervision. Fatih was anxious for both his wife and babies. However, he was never scared. "I only thought how my wife can bear healthy babies. God gave them to us," he said.

Immigration from Ağrı to Bursa

The family migrated from Ağrı to Bursa as there was a serious health risk during the pregnancy. A team of 15 delivered the babies in a private hospital. As the babies were six-and-a-half months-old, they were put in an intensive care nursery unit. Hatice could see them after two days.

She stressed, "I was shocked when I first saw them. They were God's miracles. I was scared to hold them as they were really small. However, when I took them, this fear was gone. I was happy to bear them, and also thought how I would take care of them. My husband always prayed to be surrounded by his children when he sits down to a meal. God heard him and gave him what he wanted."

The couple spent three months between the hospital and home. While they were thinking to stay only for a while in Bursa, they settled here. They were worried about how to care for the quintuplets. The father started to work as a subcontracted worker at Bursa Metropolitan Municipality. Besides, the municipality covered the family's baby food expenses.

The needs of the quintuplets are numerous. Ten kilos of yogurt, seven packages of pasta and seven kilos of milk are bought for them each week. They like desserts and sweet cakes. Their clothes are chosen by fives in same colors and models. If one sees a different dress in another, there appears a problem. The monthly cost of them passes Tl 1500 ($348). The Yılmaz couple scrape out a living. They wait for help for clothes and other expenses. Ecrin, the older sister, is like the right hand of the mother. She plays with them and helps her mother to feed them sometimes. Ecrin said, "I was really happy to learn they were girls. I have sisters to play now."

The team leader of the quintuplets is Tenzile, who was born first. When she is up, the others are up, as well. "The leader of the group is Tenzile. The others follow her. Rabia and Hiranur keep to themselves. Havva is hasty and Berfin is lively. They do not resemble each other much but they are naughty," their father said. While the family buys clothes for the babies, craftsmen cannot believe they had quintuplets. Those who see the quintuplets on street turn and look at them again.

The names of the quintuplets are respectively Tenzile, Havva, Hiranur, Berfin and Rabia. Fatih decided on the name of the first child a month before the babies were born. "We love our President Recep Tayyip Erdoğan. His mother Tenzile was a respectable person. This is why we named our first baby of the quintuplets with her name. I love him so much that I gave his mother's name to my child. I want him to take the quintuplets on his lap one day," he added.