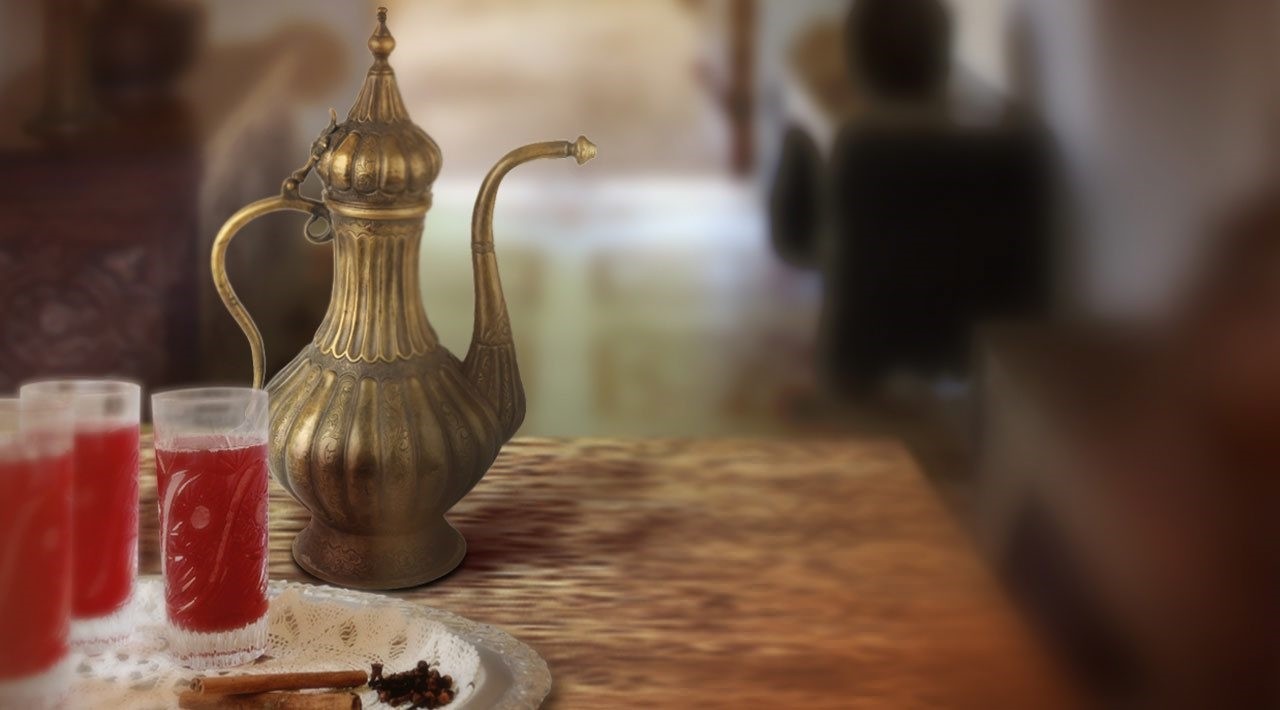 As a cure-all and indispensable part of Ottoman cuisine, sherbet is often made from traditional recipes that can be traced back to Ottoman palace kitchens, it is a must for every iftar table

Sherbet is made from the fruit juices or extracts of various flowers, fruits and herbs combined with sugar and water to form a sweet syrup that is diluted with water, ice or snow. Served cold, sherbets are often made from roses, hibiscus, lemons, pomegranates, peaches, cardamom, tamarind and mint.

Along with its refreshing taste, sherbet also has many health benefits, including helping to lower cholesterol, weight management, aiding digestion, regulating blood pressure and preventing thyroid-related issues. It makes skin smoother and is very effective in removing radiation from the body. Sherbet is a blend of many fruits and spices, which makes it a remarkable antioxidant, as well. The delicious beverage can be made and enjoyed at home using syrups available at many markets or from ingredients such as lemon- and orange-blossom extract.

Sherbet and fruit compotes regularly accompanied Ottoman meals, especially during Ramadan's fast-breaking meal, iftar. On hot summer days, sherbets were served to guests as refreshments and consumed by lactating women to boost their milk production. These drinks were also served daily, especially with coffee. Today, sherbet is mostly served in crystal bowls for ceremonial occasions across Turkey, such as the holy month of Ramadan.

Ali Güler has brought original recipes of Ottoman and Turkish foods to the Kadıköy district in Istanbul and bottles 48 sherbet types, preparing them each with traditional recipes. Representing every color, sherbets add vibrant and tangy flavors to any meal.

Sherbets were drunk in place of water and used as medicine in the Ottoman Empire and were also served with crystal goblets. Their sale price and service style were determined by legal codes. Sustaining the sherbet culture, Güler prepares his sherbets in line with their original recipes 365 days of the year.

Speaking to Anadolu Agency (AA), Ali Güler said he has been preparing Ottoman sherbets for 15 years in his restaurant, where 720 Ottoman and Turkish foods are served.

Noting his father and uncle first opened a patisserie in Kadıköy 53 years ago that was later turned into a restaurant, Güler reported that they started to focus on Turkish and Ottoman cuisine in 2003 after their customers wanted them to support the culture.

As the third generation, Güler has been sustaining Turkish and Ottoman culture and his daughter will continue after him as the fourth one.

Stressing that one of his friends gave him the notebook of his grandfather who was the chief cook in the Ottoman palace, Güler added, "It was a notebook of handwritten sherbet recipes written in Ottoman. We kept it for years. One day, one of our friends requested tamarind sherbet. I immediately thought of the notebook. I had two people translate it. Then, I prepared the tamarind sherbet first. The notebook was a treasure. I learned the recipes of our sherbets from it. The most important part of the Ottoman sherbets, especially the tamarind sherbet, was the spice mixture in it. The spices vary. While we put just 3 grams from some of them, we add 150 grams of others. We are able to promote our culture today thanks to this notebook."

Mentioning that most sherbets are not prepared properly, Güler added: "Those who have no idea about sherbets prepare them, and peo

ple have to drink. The Ottoman sherbets date back 600 years. In fact, the recipe for skencebin sherbet, which is prepared with honey and vinegar, dates back nearly 1,000 years. It's a really important sherbet in Mevlevi cuisine. It's also said that the sherbet was one of of Mevlana's favorite drinks. Doctors recommend it as an antioxidant. However, it has been prepared in Ottoman cuisine for centuries. When you drink a glass of this sherbet on an empty stomach, it cleanses your body."

The most popular is tamarind sherbet, which is called the "sultan of Ottoman sherbets." Its most important feature is that it boosts blood production and provides energy.

"Five-month-old babies and pregnant women can drink tamarind sherbet. Lavender sherbet relaxes people. Nearly every sherbet in the Ottoman cuisine includes flowers. The range of sherbets is really rich. We also prepare more than 720 Ottoman and Turkish foods in our restaurant. We prepare 13 or 14 foods every day and change the menu daily. We have 48 sherbets on our menu," Güler continued.

Ali Güler recommended two glasses of tamarind sherbet at sahur (the pre-dawn meal) to quench thirst. He said, "Another important sherbet is rose sherbet. It's natural and you can see rose petals in it. Ice should never be added to sherbets. They're put in refrigerators for four or five hours. Mint is also very refreshing as are the poppy and cornus mas sherbets."

While discussing their special sherbet for diabetics, Ali Güler stated, "The essence of it is sour apple which is raised on the Kastamonu mountains. There is no sugar or sweetening in it. It's totally natural and can decrease blood sugar."

Güler explained that his acquaintances call him "Ali Baba" (Father Ali). After deciding to produce his sherbets under the brand Ali Baba, Güler applied to use this name and started selling his Ali Baba-brand sherbets eight months later. "Fizzy drinks are unhealthy and the benefits of the Ottoman sherbets are extensive. You can drink them every day, but people usually only remember them during Ramadan. This is actually a culture," Güler reported.