Garbage to revenue: Syrian refugee women make a living for their families 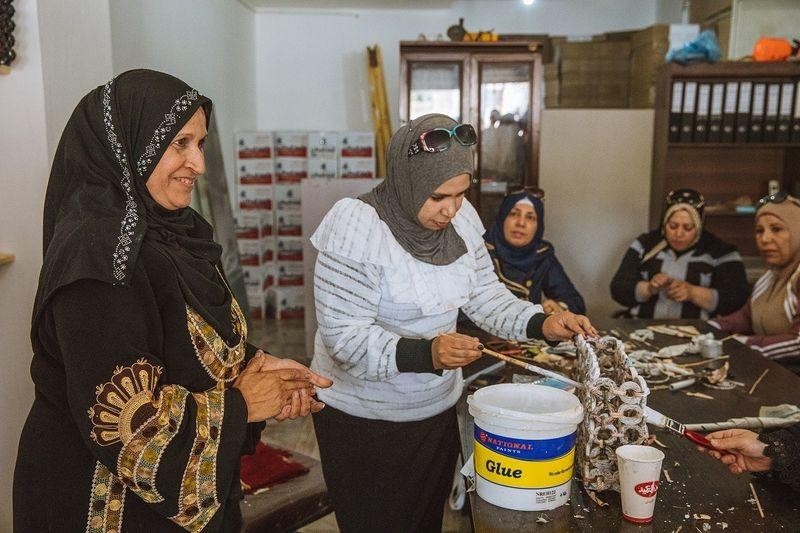 Syrian refugee Sameera al-Salam shows a colleague how to strengthen a paper handbag with glue at an upcycling workshop.
by Jun 19, 2018 12:00 am

They may have fled their war-torn country but life is still hard for Syrian refugee women taking shelter in Jordan who have to financially support their families. Now with a new project, Syrian women turn garbage into materials they can sell to make a living

Sameera Al Salam folds a discarded piece of newspaper into a long strip then loops it round her finger to form a tight circle, the first stage of making the upcycled handbags, trays and bowls the Syrian refugee hopes will help her earn a living.

Al Salam, 55, was a hairdresser with a passion for "art and making things" before she fled her war-torn homeland for Irbid in northern Jordan with her family in 2012.

Now she has two teenagers and a husband left paralyzed by a stroke to support in a country where she has no automatic legal right to work, and they are three months behind on their rent. 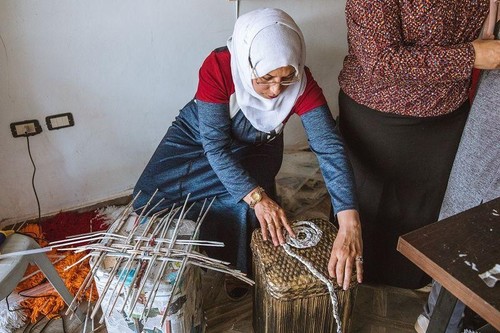 Syrian refugee Sahira Zoubi works on a new handbag made from recycled newspapers at an upcycling workshop in Irbid, Jordan.

"We were living a really happy life. I had a garden where I grew everything," Al Salam told the Thomson Reuters Foundation.

"We had to leave because of the airstrikes. We were always trying to put things in front of the door to protect the children. Whenever I remember, it breaks my heart."

Like most of the more than 655,000 Syrian refugees living in Jordan - and many Jordanians - poverty, debt and unemployment dominate the family's existence. Al Salam hopes her involvement in a new rubbish collection and recycling scheme that aims to alleviate the poverty of both refugees and locals and bring the two communities closer will help turn things around.

The scheme, managed by charity Action Against Hunger, employs 1,200 people to collect and sort waste from the streets and provides temporary work permits to refugees who take part.

Nearly half the participants are female in a country where women can face cultural and family obstacles to employment, including a culture of shame around going out to work.

One in three Syrian refugee households in Jordan is headed by women and more and more are now seeking jobs in an already crowded market.

More than 80 percent of the Syrian refugees in Jordan live below the poverty line, according to Care International.

Awsaf Qaddah, a 39-year-old Syrian widow, said working as a rubbish collector initially felt like "a kind of shame", but she now feels only pride. "The job took me out of this atmosphere I was living in at home. Women can and should go out and work, especially with the circumstances we're facing," she said. "I have no husband or father or brother to help - I'm proud to do it."

Fellow worker Berwen Misterihi, who is Jordanian, was forced to earn after her husband left her and their four children.

"Women and men would make comments about me picking up waste," she said.

"I said to one man, 'I'd rather work than come to you for the money' and he apologised."

The project workers were given 50-day contracts paying 12 Jordanian Dinar ($16.90) a day, plus training and social security provisions. Some of the waste was sold to scrap dealers for extra cash.

Al Salam was among a group of women who started an upcycling project, turning the waste paper and plastic they collected into objects to sell.

Action Against Hunger, which has managed the waste project since 2017 with German government funding, is now setting up a second phase focusing on equipping cooperatives and workers to continue waste processing and upcycling unaided.

"First there was a focus on breaking the culture of shame for women. Then we wanted ideas of how they could benefit from waste," said Sajeda Saqallah, programme manager with Action Against Hunger.

"Upcycling is a new concept here, so we took them to Amman to learn about it."

Al Salam said her husband did not object to her taking part in the scheme. She now hopes she will get training on marketing and trademarking and win one of a number of new contracts Action Against Hunger is providing to carry on upcycling for wages.

The women in her upcycling group meet regularly and share ideas and news in a WhatsApp group. At a workshop filled with their creations - from handbags to light shades to side tables, all made from recycled newspaper and cardboard - Sahira Zoubi, a Syrian refugee and mother of five excitedly points to the gold handbag she made.

Zoubi, who has not seen her husband since the Syrian Army captured him in 2012, has made close friends through the project from both Syria and Jordan who she says are "like siblings". "Doing this project is so joyful because you come here and forget about your problems," she said. Al Salam breaks down as she tells how the project has allowed her to overcome her fears of being a refugee in a strange country.

"I never really mixed with people before this. I was afraid to go outside, I wasn't involved in the community," she said.

"I was from a different country. I didn't know what people were going to do to me or what they would say. Now I like to mingle." Travel for this story was covered by Action Against Hunger.