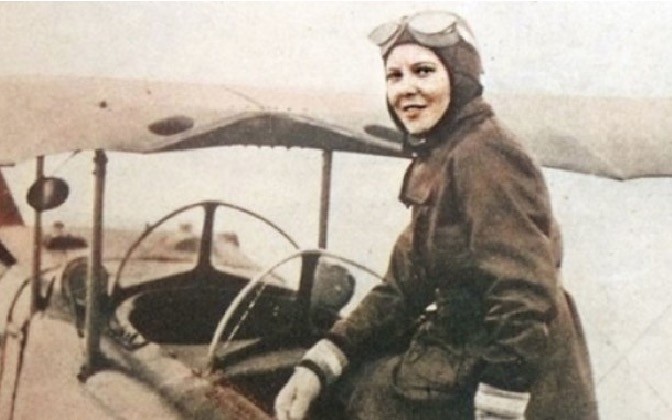 Eribe Kartal Hu00fcrkuu015f trained in aviation from an early age and died at 18 when her parachute failed to open during one of her training jumps.
by Daily Sabah with AA Jun 26, 2018 12:00 am

The road to success is paved with failure, devotion and sacrifice, and the pioneers of Turkish aviation have experienced it all first hand

The history of Turkish aviation started just 10 years after the Wright Brothers first flew the plane with a controllable motor in 1903. In 1912, the Ottoman Empire sent students to European aviation schools to learn technical details as well as piloting this newly invented machine. The first aviation training took place at Yeşilköy Aviation and Mechanical School with 17 planes purchased from Europe.

When World War I broke out, despite the bad situation of the planes, Ottoman pilots were brave enough to take off and join the bombardment. During these hard times, the brave Turkish pilots blossomed. They pioneered Turkish aviation and made history. This is a story and commemoration of three Turkish pilots who opened a new era in Turkish aviation and died while serving.

Capt. Mehmet Fethi, who was the first pilot of Turkish history, died in a plane crash. He was born in Ayazpaşa, Istanbul in 1887. After graduating from Çarkçı Ameliye, a high school specialized in marine engineering operations, he worked for various military factories as a technician. As part of the aviation initiative kicked off by the Ottoman Empire, he was sent to the aviation academy located in Brooklands, England in June 1912, becoming one of the two engineering officers in the team who received aeromechanics education.

Having command of technical aspects of airplanes, Fethi Bey was awarded with Silver Merit Medal in January 1914 for his services in the front during the Balkan War. In November, 1913, he performed the first VIP flight in Turkish aviation history by carrying Cemal Pasha and Talat Pasha, the notable statesmen of the period. On the same day, he also carried Osman Vehbi Bey, a newspaper correspondent, in the same airplane, and completed the first flight that hosted a civilian and a press member together in Turkish aviation history. With Belkıs Şevket Hanım, he airdropped brochures to raise donations for the campaign to purchase airplanes on behalf of the Association for the Protection of Women Rights.

At the time, a flight was determined to be performed in order to relieve the suffering after the defeat in the Balkan Wars and to demonstrate that the Ottoman Empire could also successfully use the latest means of science and technology just like the West. A flight that would set off from Istanbul and land in Egypt through the Anatolian and Middle Eastern territories of the empire was significant in terms of showing the forces trying to stir chaos in the Middle East that the empire was still powerful. This flight would also prove that the Ottoman state showed care for every part of its territory and was capable of reaching these places. This flight was officially named "Istanbul-Alexandria Air Travel." As part of the air travel, 27-year-old Capt. Mehmet Fethi Bey and observer Lt. Sadık Bey aviated a Bleriot plane named "Muavenet-i Milliye" while pilot Lt. Nuri Bey and aerial observer Capt. İsmail Hakkı Bey aviated a Deperdussin plane named "Prens Celalettin." Having a critical importance for the Ottoman Empire, the flight aroused tremendous curiosity in press and public.

On Feb. 8, 1914, the planes took off from Istanbul following a grand ceremony despite the rainy weather. The plane flown by Fethi Bey and Sadık Bey followed the route Istanbul-Eskişehir-Afyonkarahisar-Konya-Tarsus-Aleppo-Homs-Beirut-Damascus, and finally landed in Damascus successfully. Having met a great deal of interest in Damascus, the aviators gave interviews to several newspapers after landing. However, the plane crashed around Lake Taberiye due to technical reasons while flying from Damascus to Jerusalem on Feb. 27. The two brave aviators lost their lives in the crash, becoming martyrs.

The aviators of the other plane, pilot Lt. Nuri Bey and observer Capt. İsmail Hakkı Bey, attended the funeral prayer of their friends by going from Homs to Damascus with "Prens Celalettin." After the prayers attended by a huge crowd, the martyr aviators were buried in a graveyard located by Selahattin Eyyubi Shrine in Emeviye Mosque.

Pilot Lt. Nuri Bey continued his flight after the accident but he lost his life as the plane he steered crashed into the sea while taking off from Jaffa on March 11. Capt. İsmail Hakkı Bey who was also in the plane, survived the crash. Lt. Nuri Bey was buried in the same graveyard with his other two colleagues. Also, during his last flight, Lt. Nuri Bey performed the first airmail service of Turkish aviation history.

Pilot Capt. Salim Bey and Observer Capt. Kemal Bey were assigned to complete the flight. The newly-purchased Bleriot plane named "Edremit" was first sent to Beirut through a vessel. Taking off from Beirut on May 1, the plane landed in Alexandria on May 15 by following the route Jerusalem-Arish-Port Said-Tell El Kebir-Cairo-Saqqara-Maadi-Cairo-Tanta-Alexandria. The aviators were met with great interest in Egypt and a postcard was printed in the memory of the flight.

The whole of Turkey lamented the loss of the aviators. In 1934, Muğla's Meğri town was renamed as Fethiye in remembrance of Mehmet Fethi Bey. Also, during the 1940s, a bust was built in the memory of Mehmet Fethi whereas a memorial opened in Fethiye in 2004 showcased the poems written by various poets for him.

The historic "Istanbul-Alexandria Air Travel," which encompassed a 2,250 km flight, was brought to the agenda with the Golden Wings Project in 2001. As part of the project, carried out with the cooperation of Turkey's state-run TRT broadcaster and Turkish Air Forces Command, the historic flight was repeated with planes similar to the original ones. Featured as a three-episode documentary, the flight set off after a ceremony held in Istanbul on May 15, 2001 and landed in Alexandria by remaining loyal to the original route as much as possible.

The monument made in memory of Fethi Bey, Sadık Bey and Nuri Bey, the first martyrs of the Turkish aviation history, was erected in a park located in front of the old municipality building in Istanbul's Fatih district. Designed by the architect Vedat Tek, broken pillars were used in the 7.5-meter-long monument that is made of dolomite and bronze. The broken pillars symbolize the incomplete flight embarked on for a high ideal. Also, another monument is known to have been built in the very spot the first crash took place in 1914. This monument was brought to Turkey's agenda again with the endeavors of Middle East Technical University Aviation History Instructor Bülent Yılmazer in 2000.

Recognized as the first woman pilot in Turkish aviation history to die in a plane crash, Eribe Kartal Hürkuş was born in Istanbul on Oct. 30, 1918. As the niece of Vecihi Hürkuş, one of the most prominent pioneers in Turkish aviation history, Eribe Hürkuş spent most of her childhood with her uncle after her father, Commander Bedrettin Bey, was martyred. Eribe Hürkuş was introduced to aviation during her childhood years. She went to Vecihi Sivil Tayyare (Civil Aviation) School in Istanbul's Kadıköy district and learned aviation when she was only 16. As her uncle started working for the newly-established Turkish Bird institution in Ankara, she continued her education in Ankara. She received parachute jump training and successfully completed her first trial on Oct. 24, 1936 prior to the Republic Day ceremonies. On Oct. 29, she got on a Caudron 59 plane for her last trial jump at the hippodrome. However, as she jumped out of the plane at about 600 meters, her parachute did not open. Severely injured after falling, she lost her life at the hospital where she was taken. Dead at 18, Eribe Kartal Hürkuş became the first woman martyr in Turkish aviation history. Many statesmen of the period, including then Prime Minister İsmet İnönü, expressed their condolences after her death, while many writers penned essays and articles about her.