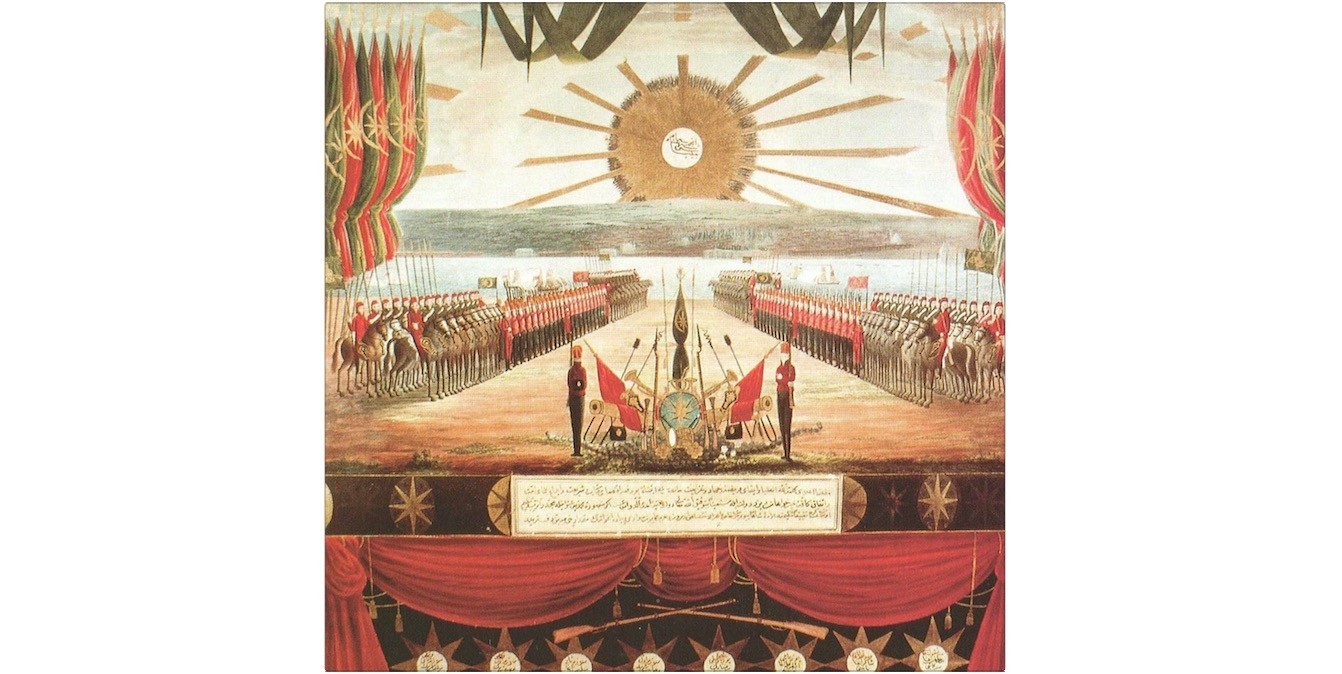 A poster painted by an unknown artist describes the modern Ottoman Army which was founded after the abolition of the Janissary corps in 1826.
by Erhan Afyoncu Jul 06, 2018 12:00 am

Centuries lafter its foundation, the Ottoman Empire experienced a sweeping structural change that took place two centuries ago during the reign of Mahmud II

Mahmud II was a sultan who completely changed the structure of the Ottoman Empire. Westernization in the real sense began during his reign. The period of sovereignty was so intense, and it had worn out the sovereign so much that he said, "I am fed up with the troubles of the sultanate."

The strengthening and restructuring of the central authority are the characteristics of Sultan Mahmud's rule. After the abolition of the Janissary corps in 1826, military reforms were made. Internal and external security issues were dealt with for a long time. Significant changes could only be made to the administrative structure toward the end of the sovereign's reign. Traditional institutions were reorganized similar to the European model.

Since the reforms were made very quickly, considering the short-term consequences, rather than a planned and programmed structure, there were some troubles with the operation of some institutions, and therefore many new regulations were made. During the time of Mahmud II, Tanzimat and later periods, new institutions were established, abandoned, linked to other entities many times. They were merged, separated and set up again as individual institutions. Due to the willingness of statesmen to shape the state according to their own beliefs, the struggle for influence occurred between the liberal and conservative wings. This fight inflicted a heavy blow on the process. Many disruptions occurred as the customs and habits in the state's functioning ceased to exist and new ones did not occur immediately and met resistance. It took a very long time for the new state structure to settle.

Pertev Mehmed Said Pasha and Hüsrev Pasha were at the forefront during Mahmud II reforms. Some of the topics were discussed at the advisory council, and others were settled in an ad hoc manner.

Sultan Mahmud transformed the office of the grand vizier into a prime ministry, removed it from being an independent authority and decided on its administration by adding it to a ministry.

Councils were created under this restructuring. Many issues emerged since there was no traditional parliamentary practice outside the Advisory Council. The first members of the parliament did not work efficiently because they served as the members of parliament in addition to their other affairs. After a while, parliamentary membership became independent. The differences in rank among members of the parliament also negatively affected parliamentary work. After a while, the rank of parliament members was equalized. Some councils were closed down or linked to other institutions over time. The "Dâr-ı Şûrâ-yı Bâbıâli" was established to help the government work on many subjects. However, it was abandoned in 1839, when it could not work efficiently. "Meclis-i Umur-ı Nafia," which carried out successful works, was connected to the Ministry of Trade in 1839. Since the simultaneous existence of parliaments carrying out the regulations and control regarding reforms, such as "Meclis-i Vâlâ" which was established in 1838 and "Meclis-i Âlî-i Tanzimat" which was founded in 1854, caused some difficulties, the two parliaments were assembled under the name of the "Meclis-i Ahkâm-ı Adliyye" in 1861.

There were three reasons for the difficulties in reforms made by Mahmud II and later in the Tanzimat period. The lack of trained statesmen who would determine what to do and implement, the lack of financial resources needed to carry out the reforms and the state being under constant threat of war caused shortage of time to establish the reforms in a cold-blooded manner.

The most important issue was the lack of permanent staff to make and implement the reforms, that is, to undertake such a major task. Due to the lack of trained staff, those running similar positions in the past had to be assigned to the new institutions. So, the reforms were carried out by the old staff. The reluctance and opposition of the bureaucrats and officials to implement the reforms also led to the unhealthy functioning of the reform process.

In 1821, the Chamber of Interpretation was established as a unit of the office of grand vizier, the Prime Minister of the period, in the Sublime Porte. In 1826 confiscation and drudge procedures were abolished.

In 1826, the Ministry of Public Order was established to carry out law enforcement and municipal services for the purpose of regulating order which was disrupted with the Auspicious Incident (Vak'a-yi Hayriye) in Istanbul.

In 1831 the first census and extensive land surveys were carried out in order to ensure that taxes could be collected fairly. In 1831, the first official newspaper in the name of "Takvim-i Vekayi" began publication.

Furthermore, in February 1838, Treasury finance divisions were merged, and the Ministry of Finance was established. At the end of the period of Mahmud II, in May 1839, the Ministry of Grain and Provisions (Nazarah al-Zahirah) was abolished and replaced by the Ministry of Trade.

The ministers were given vizier and counselor positions but were not given the title of "pasha" because they were civilians. However, after a while, the pasha title was given to the ministers of foreign and internal affairs. Undersecretaries were appointed to assist the ministers in the process.

On March 30, 1838, the Office of Grand Vizier was reorganized into the "Prime Ministry." With this amendment, the sultan's absolute authority was restrained, and the effectiveness of the grand vizier in the administrative structure was limited. The prime minister was appointed as the representative of the organizing agency responsible for the co-ordination of ministries, in addition to his title as the interior minister. In this way, the ultimate goal of establishing ministries in the modern sense was to prepare the infrastructure of transition to the cabinet system as in Europe.

In order to determine the frame and legal basis of this restructuring period, a series of legislative and advisory councils were established, such as "Meclis-i Vâlâ-yi Ahkâm-ı Adliye," "Dâr-i Şurâ-yı Bâbıâli," "Dâr-ı Şurâ-yi Askeri," "Meclis-i Has" and "Meclis-i Vukela." Moreover, "Meclis-i Umur-ı Nafia" was established in June 1838 in order to carry out all the works required for agriculture, public works, industry and development, and "Meclis-i Umur-ı Sıhhiye" to organize health affairs. Steps were taken to make embassies abroad more functional, intelligent, and prudent and, at the same time, diplomats who knew the language were appointed to major European capitals.

A passport procedure was introduced in order to travel abroad. In 1838, the quarantine organization was established. In the field of communication, on the other hand, new postal routes were built as of 1832 and important steps were taken to establish the postal organization.