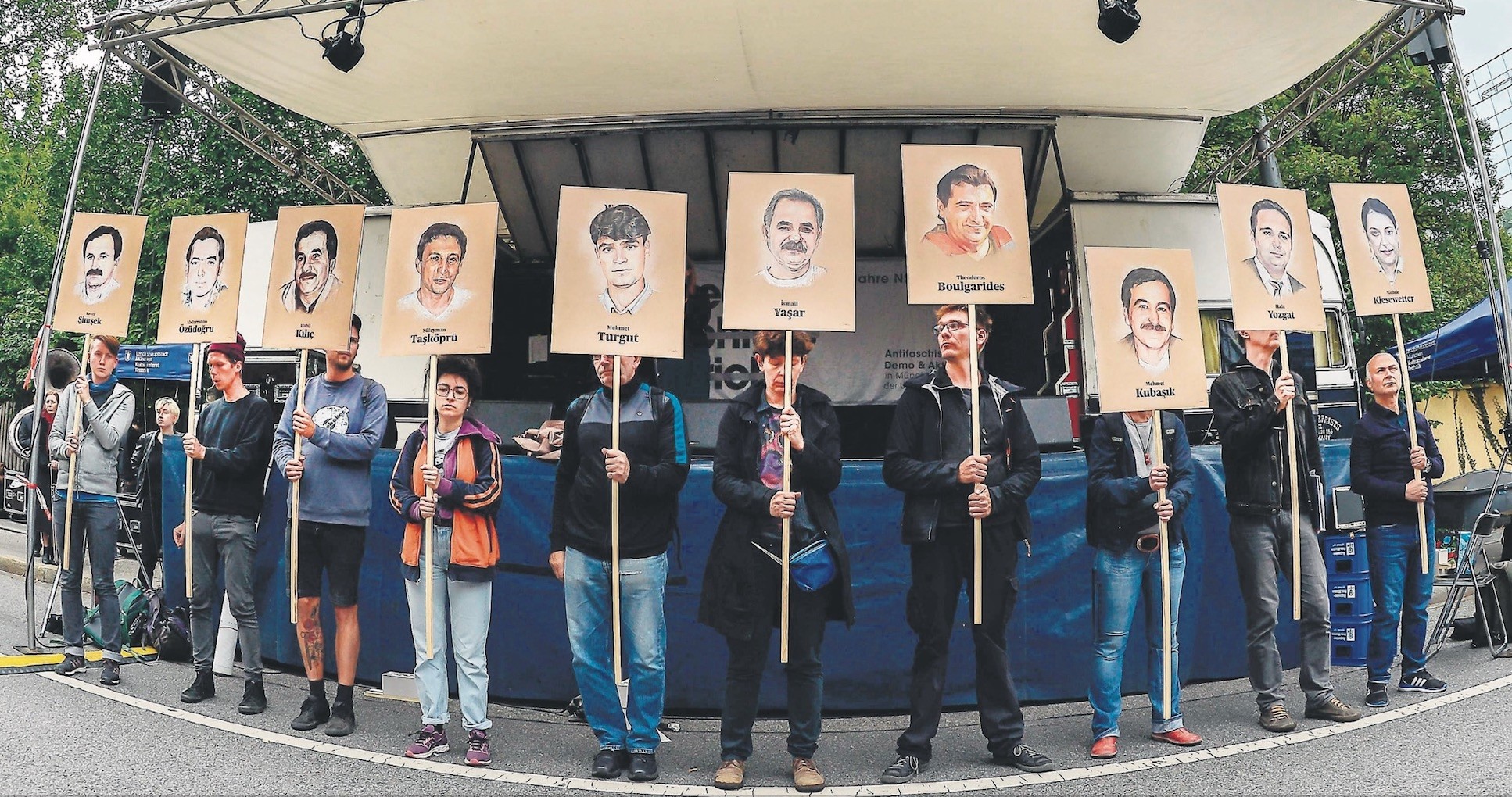 For years, the families of the NSU victims have waited for the German court to avenge their loss, but the verdict on Wednesday did little to put their hearts at ease

"La ilaha illa Allah [There is no god but Allah]," İsmail Yozgat cries out suddenly in the court room. He is the father of Halit Yozgat, one of the German neo-Nazi terrorist group National Socialist Underground's (NSU) 10 victims. Ismail's uproar bursts in the court room as the judge reads out loud how Halit was murdered. 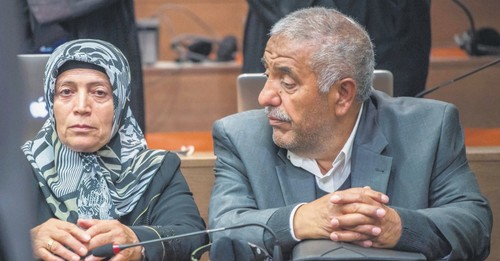 Ayşe Yozgat (L) and İsmail Yozgat, parents of NSU victim Halit Yozgat sit in the courtroom before the proclamation of sentence

On Wednesday, the NSU trial in the southern German city of Munich came to an end. Having commenced on May 6, 2013, one of the most crucial trials in the history of modern Germany was concluded in over five years, leaving numerous questions unanswered. Still, the families of the victims headed to the court room with the slight hope in their hearts that there may be a soothing verdict.

The security measures were overwhelming. Germans and Turks had already camped outside the court building to reserve a spot for themselves as it was well-known fact around here that approximately 50 audience members would be allowed in.

In the meantime, a diplomatic crisis between Ankara and Berlin was prevented as some consulate staff spent the night to save seats for the Turkish delegation. Had they not done it, Turkish consul generals, a deputy from Ankara and Turkish justice ministry officials would have to stay outside. What a scandal that would be.

Inside the court room the atmosphere was tense. A dozen audience members were dressed in full black, the neo-Nazi style, as if they showed up to support the NSU gang militants. Once the trial day kicked off, the silence crawled back in. 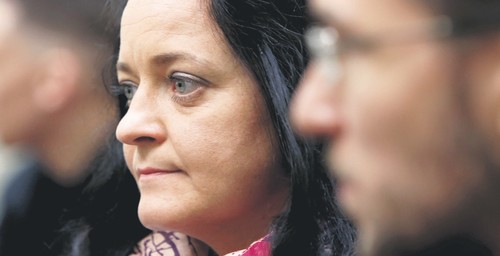 Defendant Beate Zschäpe waits in a Munich courtroom before the judges deliver their verdict.

The verdict on Beate Zschäpe, one of the three founders of the NSU, was a life sentence. The expected decision. The audience remained quiet. The verdict on Andre Eminger, who was accused of aiding and abetting the NSU: two-and-a-half years not for complicity but backing a terrorist group. On top of that, the judge explained how Eminger is a good family father and how the case has been so exhausting for him. Eminger is to walk free.

The neo-Nazis in the court room clapped their hands so hard that it echoes on all corners of the court room. A victory for the Nazism, a defeat for the victims. So the German justice system has decided.

After the German court turned into a celebration party for Nazis, the Turkish delegation stormed out of the courtroom.

"There are too many Nazis in here," said Mustafa Yeneroğlu, a deputy for the ruling Justice and Development Party (AK Party), before making his way out in fury.

The NSU is known to have been established by three neo-Nazis: Uwe Böhnhardt, Uwe Mundlos and Beate Zschäpe. The trio committed murders from September 2000 to April 2007 without any hindrance, in addition to bank robberies and acts of arson. In total, Böhnhardt, Mundlos and Zschäpe killed eight Turks, a Greek and a German police officer. Böhnhardt and Mundlos were found dead of gunshot wounds on Nov. 4, 2011. Four days later, Zschäpe turned herself in.

It has been nearly 18 years since the first NSU murder, yet some questions have never been answered by the German state even despite the end of the NSU trial. How could such dangerous and neo-Nazis move back and forth through all parts of Germany to commit such crimes? How did they end up in possession of the weapons? How could they have been not stopped? How did they pick out their victims? What was the role of the German state in it? How responsible is German intelligence?

Halit Yozgat's murder in Kassel, for example, raises eyebrows in regards to the involvement of the German intelligence. Andreas Temme, a spy for the German domestic intelligence agency (Bundesamt für Verfassungsschutz), was at Yozgat's internet café shortly after his murder. He left a 50 cent coin on the desk, in front of which Halit was shot dead, and exited the café. Later on, Temme claimed that he did not see anything.

The incident, along with others, casts serious doubts on the credibility of the case and pours out further fire into the hearts of the families of the victims.

In fact, the credibility crisis throughout the NSU case and the frustrating verdicts concern the Germans as well. Ute, 78, enters the court room in the last half an hour of the six-hour-long trial day. She had to wait in line for eight hours to be able to get in.

"Thankfully there was a chair in the last two hours of the waiting," she whispered in an attempt to not make a disturbing noise.

As the verdict on Eminger was read out loud, Ute shook her head in disbelief.

"Our state is affected by the verdicts. Now there will be strong pressure. The case should have been resolved," she said. Federal Public Prosecutor Peter Frank admitted that the case failed to bear answers.

"For us there were also questions during the procedure. Questions, for example, about the many weapons that have been used by the NSU. The relatives had the question: Was there any support networks on the ground?" he said.

Germany is a country that prides on its rule of law and judiciary system. For the victim families, though, it is nothing but farce. Abdulkerim Şimşek, son of Enver Şimşek who was the first victim of the NSU as he was killed in front of his flower stand in the German city of Nuremberg, is born and raised in Germany.

Abdulkerim's fluent German is evidently better than his Turkish. Despite being a "well-integrated" German as he is, Abdulkerim's trust in the German justice system is in tatters.

"They claim that Germany is a state of law but it is nowhere close, this trial has proved me this. We were born and raised here. Our trust has long been damaged yet from now on we do not believe in the German justice system," he said.

Mehmet Daimagüler, a lawyer for one of the victims, is of Turkish origin. Daimagüler, too, argues that the case was all but a judicial success.

"The resolution [of the case] does not end today, we have to assume that there are other accomplices and accomplices of the accomplices who are at large," he said.

For some, German rule of law bore its fruits on Wednesday after a very lengthy process. For the Turkish community in Germany and Ankara, the reality is far from it. Ali Kemal Aydın, the Turkish Ambassador to Berlin, said in a pause during the trial that the verdict did not relieve the conscience of the families of the victims.

"This case is not closed," he vowed.

From the very beginning of the NSU murders, the German state has missed the chance to confront the issue and solve the murders as soon as possible or prevent further ones with necessary measures after the first incident in September 2000. Today, the hearts of more than three million German citizens of Turkish origin are broken as well as those of feeling Germans.

In the wake of 438 trial days and more than five years, the dysfunctionality of the German state in the NSU case leads to two facts: Victory for Nazism, defeat for the victims.