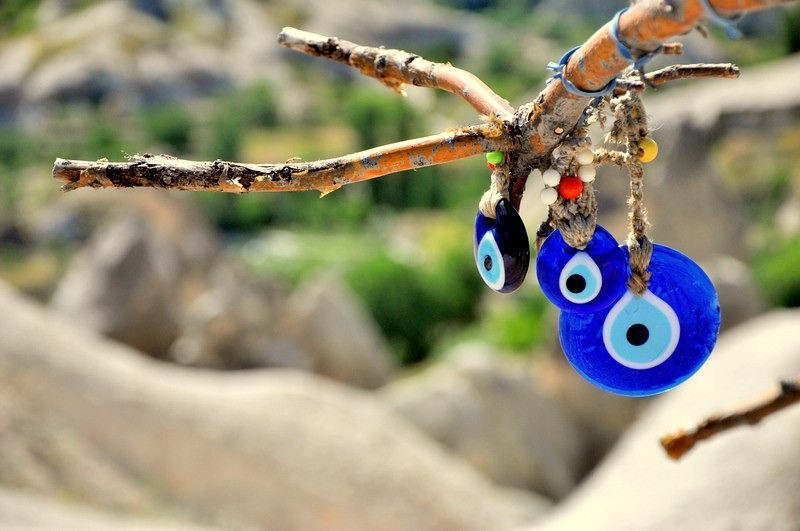 Throughout history, the need for protection from the evil eye has been reflected in the creation of amulets offering protection.
by Bulut Yamandağ
Jul 21, 2018 12:00 am

In Ancient Egypt, it was believed that people were protected by mystic eyes. To protect themselves from evil, the ancient Egyptians conducted various rituals including creating talismans to protect them, which is still a practice seen in many cultures today.

Here is the story of the evil eye talisman. Does it possess mystical powers? Is it an abstract shield? Or is it just fine jewelry?

The evil eye talisman is an important symbol of Turkish culture. You can see them hanging on the doors and walls of houses or as jewelry on babies and children to protect them from evil.

It is believed that negative energy and the bad thoughts of people spread through the eyes and the effects of this energy can affect others. This is known as to "be touched by the evil eye."

There is a belief transferred from generation to generation that the evil eye can harm humans (and even animals) both mentally and physically. It is usually said that jealousy is the worst evil eye and it is something that you need to be protected from.

Throughout history, the need for protection from the evil eye was reflected in the creation of amulets offering protection. These amulets evolved into the evil eye talismans, which became an iconic symbol, and today have even became an emoji.

Although there are different versions, usually evil eye talismans are dark blue and either round or eye shaped. The pattern is of concentric circles intended to create the effect of a white or light blue eye in the center. The design of the talisman has come a long way until the introduction of this modern style came into popular use.

The concept of the evil eye dates back thousands of years. It was first recorded in Mesopotamia, but undoubtedly is far older than that, going back in time ever since humans have given each other dirty, jealous looks.

According to one common belief, Osiris was the god of life in Egypt, and his sister Isis was the goddess of magic. Seth, the other brother, was the god responsible for evil. As the story goes, Seth got angry with Osiris because he married Isis, so he made a plan to kill his brother. One night, when Osiris was sleeping, Seth took his brother's measurements then made a pretty crate. Then Seth organized a feast, and gave the crate to his brother to test. As Osiris entered the crate, Seth and his guards trapped him in it and threw it into the River Nile. Isis was sad and swore to find her husband. She used her magical powers everywhere to find him. When Isis found the crate, Osiris had already died. Isis hid the crate and tried to bring him back to life. But, Seth found the crate and divided Osiris into 14 pieces and distributed the pieces all over the world. She found her husband's pieces again and returned Osiris to life. But he couldn't speak, see or hear.

Osiris and Isis's child Horus, known as the "sun and moon eye," started a war against his uncle Seth, to take his revenge for his father. Although Seth lost the war, he took Horus's eye out but Horus pieced together his eyes again and gave his own eye to his father to help him get strong again. Osiris ate his son's eye and gained his powers again. Following this, the sun god Ra, made Horus Egypt's king, and Osiris the king of death.

The old Turkish tribes also believed in the power of the evil eye and created evil eye talismans. Tengri, the god of Turkish tribes, was affiliated with blue; hence, they also used the color blue in their talismans. The current design of the evil eye talisman dates back to 3000 years ago to Anatolia. The Anatolian glass masters combined the eye figure and power of fire and created a new talisman, planting the seeds for a new sort of talisman.

According to a common Turkish belief, the blue bead known as Gökçe Munçuk was the most popular talisman that Albıs, the witch in old Turkish culture, was afraid of. Gökçe Munçuk would absorb magic and reflect it back to Albıs.

For the Turks, the blue bead is not enough of a talisman to protect from the evil eye. The evil eye talisman has to be handmade. Those that are not handmade are usually used as jewelry.

Evil eye talismans must also be produced in special places called "Eye Oven" where the protective spirits stand, according to old stories. People used to fire these ovens up for special ceremonies. According to some glass masters, talismans have to be made with materials in blue, white and yellow. Yellow is meant for Horus's sun eye.

Evil eye talismans, which transcend cultural boundaries, should not be seen as just jewelry. In fact they reflect the history of humanity. Every talisman presented as a present is the continuation of a tradition that is as old as human history itself.