Faith in football: Is inclusivity a dream? 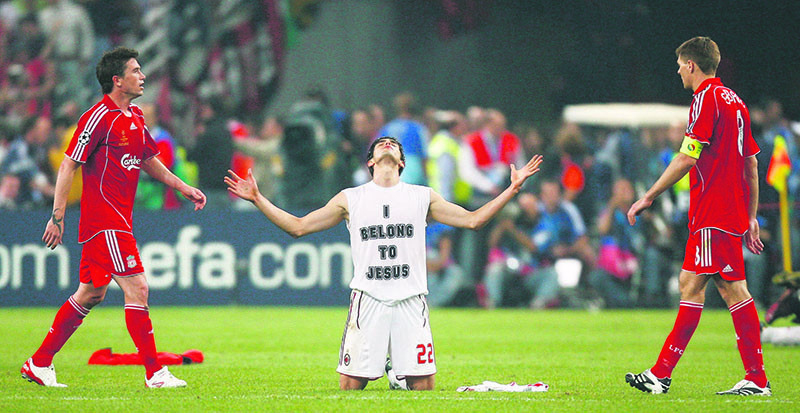 Despite FIFA's recent regulation change encouraging and supporting diversity in football, it seems like there is still a long way to go for football clubs around the world in accepting those who believe in different religions into their community

What do PSG's Neymar, Man United's Romelu Lukaku and Alexis Sanchez all have in common, other than being highly-paid football stars? Similarly, what do Liverpool's Mohammed Salah and Saido Mane, Man United's Paul Pogba, Arsenal's Mesut Özil and Man City's İlkay Gündoğan have in common, other than playing for some of the most glamorous clubs in the world?

They are all either committed Christians or Muslims who not only wear their club badges on their shirt sleeves but also their faith tradition; in a sport that today is more generally associated with secular vagaries such as administrative greed and corruption fueled by wanton commercialization; and addiction to gambling, alcohol, drugs and a promiscuous lifestyle. The sight of players such as Özil, Pogba, Frank Ribery, Salah and others donning the white ihram on the umrah at the Kaaba in Mecca is now a common feature on social media.

This is not a question of mixing football with religion or whether the beautiful game is a secular affair. Look at the increasing faith expressions of the above global sporting icons that if they are Christian, especially Catholic, always do the sign of the cross when they come on the pitch or score a goal, or if they are Muslim the prostration (sujood) after they score a goal.

When Salah scored goals against Russia and Saudi Arabia in the opening round matches in the 2018 FIFA World Cup recently, he did his signature sujood in an expression of gratitude to his creator. Similarly, even when Lukaku was substituted in Belgium's sensational quarterfinal win against Brazil, he instinctively made the sign of the cross as he reluctantly walked off the pitch as if to thank God for the opportunity.

Religion divided in the past

In recent years, faith in football has found a new-found expression, which a few decades ago would have been unheard of. In the past religion was the great divider. In Glasgow, Scotland for instance, the city's two great clubs Celtic and Rangers were traditionally divided along Catholic and Protestant traditions to reflect the internecine politics of the so-called Irish troubles, which in the halcyon days of the "Old Firm" derbies spilled on to the tension-laden terraces at Celtic Park and Ibrox Stadium, thankfully in the form of mutually racist verbal instead of actual violence.

Today, thanks to the Good Friday Accord in 1998 and the "globalization" of football transfers, both teams have players of several ethnic and faith backgrounds.

Football, like politics, finance and other aspects of society is inextricably woven with belief and value systems. The sport's global administrator and supposed gatekeeper, FIFA seems to be oblivious of the cultural function of faith in football. FIFA's new vision, according to its updated charter, supposedly is "to promote the game of football, protect its integrity and bring the game to all." One of its guiding principles is "inclusivity" with the promise that "FIFA will reflect the world and the communities in which it operates."

Clearly in Russia 2018, FIFA scored an own goal by showing remarkable cultural insensitivity in starting the tournament on the last day of Ramadan, the Muslim holy month of fasting, and the eve of the Festival of Eid, in the opening match between the host nation, Russia and Saudi Arabia, where Islam's two holy cities, Mecca and Madinah are located. Can one imagine the World Cup or for that matter the summer or winter Olympics coinciding with Easter or Christmas? After all, there are an estimated 1.5 billion Muslims in the world, and football stars, as Mo Salah has shown, are role models for millions of youngsters the world over.

Sport is not only about commercialization, kicking out racism and corruption, and developing country, grassroots and gender inclusion, but also about real people (fans) and their faith and cultural traditions. As such work-faith balance in football for those who want it is just as important as a work-lifestyle balance for secular players.

No one is advocating any creeping "Christianization" of "Islamization" of football let alone sport. That would be ridiculous and counterproductive. There are those who are trying to push this nefarious agenda through the fake news. Recently I was bombarded on Whatsapp with clips originating from Indonesia that Bayern Munich had built a brand new mosque next to its iconic Allianz Arena to cater for the faith needs of its Muslim players, which include Frank Ribery.

To its discredit, the German champions never responded to my several media inquiries regarding this and its policy on phasing out the use of plastics in its fan catering services. The clip turned out to be that of the new mosque built by the Turkish community in Cologne. Such willful misinformation only serves to undermine social progress in gender empowerment and parity in the sport in such countries as Iran and Saudi Arabia. The former still bars women from attending (male) football matches while the latter under the reforms of Crown Prince Mohammed bin Salman has only recently allowed women to attend.

There is no doubt it is the spectacular antics of Liverpool's "Egyptian King" Mo Salah that has captured the hearts of the club's faithful and the imagination of youngsters world over, breaking the goal-scoring record with 44 goals last season and being voted the player of the year in the 2017-2018 season in the English Premier League.

Salah's modesty, sportsmanship, generosity of spirit and down-to-earth demeanor has endeared him to his millions of fans, especially from his village Nagrig in Egypt. His gentle and exemplary expression of his Muslim faith is no barrier to his stardom and adulation. 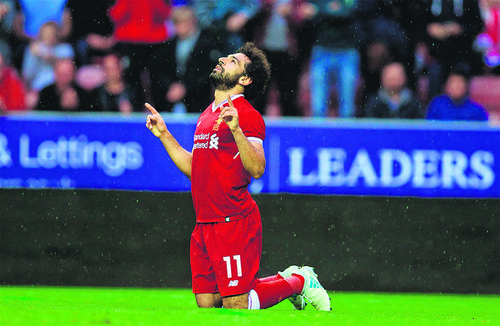 English football is steeped in tribal loyalties, which is reinforced by songs and chants from the faithful ringing out from the stadium terraces. Anfield, if you have never been there to watch Liverpool, is arguably the most emotional football ground, especially with the rendering of "You'll Never Walk Alone," which even for a Tottenham fan like me gives me goosebumps whenever I hear it.

The ultimate tribute to Salah, his football and faith come through this ditty (of several) from the famous Anfield Kop, the stand, which has witnessed the anointing of countless Liverpool legends over the years:

If he scores another few, then I'll be Muslim too.

He's sitting in the mosque, that's where I wanna be.

Faith expression in sport is not confined to football. You find it in cricket, but it is in rugby in which it is most entrenched. When the Pakistan cricket team won the ICC Trophy at the Oval in London a couple of years ago, the entire team draped in their apple green blazers and white flannels, performed a mass sujood prior to receiving their medals.

In rugby, Fiji's famous sevens team play for their community, country and Christianity. They like the largely Calvinistic South African Springboks always start and end a match with a team prayer. The then New Zealand All Blacks rugby captain, Michael Jones, took his faith to another extreme, famously refusing to play on the Sunday in a test match during a World Cup to boot.

But it was Australian rugby star Israel Folau who in April this year took faith in sports to a disturbing new level when he returned to social media with blatantly homophobic remarks, condemning gay people ostensibly "to reinforce his Christian beliefs." The fact that Rugby Australia did not sanction him over his tweets suggests that faith in sports is in danger of being either a great equalizer or divider!