A shift from traditional to modern: Ottoman military 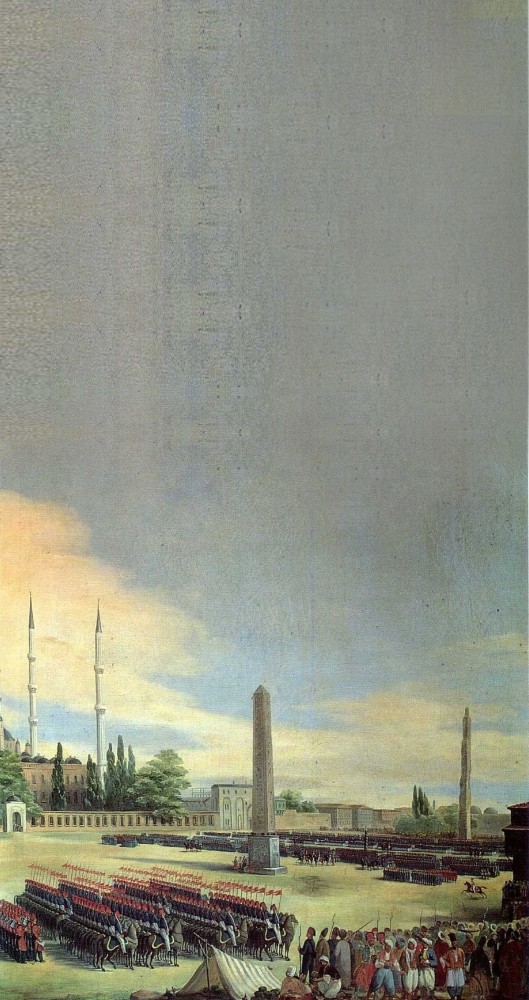 The Ottoman army, which formed the world's most important military power in the first three centuries of the empire, spent the last 300 years of the empire keeping up with changing military systems, starting in the 17th century

After the abolition of the Janissary Corps in 1826, a new army was established under the name of Asakir-i Mansure-i Muhammediye (Trained Victorious Soldiers of Muhammad). Even though the principles of the new army were determined with the sultan's mandate, there was no system for military recruitment. Salaries would be paid for 12 years of military service. The duration of military service, which was three years during the period of Nizam-ı Cedid (New Order Army), was raised fourfold. This duration of military service would keep military personnel away from civil life for a long time, including marriage. Leaving the army was only possible if there was no one left to work the soil with the death of a guardian and no relatives to look after orphans. In the absence of the war, one out of every five soldiers was allowed to leave for 6 months if their hometown was close, or 8 months if not.

Unlike previous military troops, soldiers were not engaged in anything else. They would be put on pension at the end of the service. However, the desired result could not be obtained due to the low salary. Apart from existing troops, those who were eligible for war were also compulsorily taken into military service. When the system remained insufficient to meet the empire's needs, an attempt was made to arrange for a military recruit with new laws.

With the Kur'a (Conscription) Law dated 1846, a system was introduced for the process of recruiting troops. Moreover, military service lasted five years. In places where the census was carried out under the supervision of the leading administrators of the region, lots were drawn to determine the recruits among those aged between 19 and 20. Those who did not want to go would find those who would be able to join the army in their place. Those who could not find a substitute would pay a certain amount in cash. However, this recruiting system was unsuccessful due to the unwillingness of non-Muslims to join the army, the surplus of groups who were exempted, and the deficiencies arising from the practices. There were many groups exempt from joining the army, such as madrasah students, senior bureaucrats and those who had no one left to look after their families.

In 1870 and 1886, the law on military recruitment was issued once again to correct the deficiencies in 1846 law. In 1886 the duration of military service was changed to six years. Exemptions were reduced. However, the desired result could not be obtained again. In particular, non-Muslims were sheltered on various grounds to avoid military service.

Everyone to the army

In 1908, a new law was enacted on military recruitment, but it was not issued due to the political environment at the time. However, on May 12, 1914, as the world moved toward war, a temporary law on recruitment was issued under the name of "Mükellefiyet-i Askeriye Kanun-u Muvakkatı." With this law, compulsory military service began in the country. According to the first article of the law, "military service was obligatory for all subjects except the members of the Ottoman dynasty." Every male between the ages of 18 and 45 was obliged to do military service. The duration of military service varied according to the troops. The time in the infantry class was two years. As the deficiencies arising from previous laws were well-established and mobilization was declared, the number of soldiers in the Ottoman army during World War I reached very large numbers. For the first time in Ottoman history about 2.9 million soldiers were enlisted.

The law dated 1914 continued to be implemented in the National Struggle period and in the first years of the Republic. After the declaration of the Republic, in 1927, a new law on military recruitment was adopted. This law has been active ever since with dozens of changes.

The military power of the Ottoman principality initially consisted of tribal forces like other Anatolian principalities. During the reign of Orhan Gazi (1324-1362), a military organization called "yayas" and "müsellems" (cavalry) was established by Vezir Alaeddin Pasha and Çandarl› Kara Halil from the Turkish villagers in exchange for tax exemption and the payment of two coins per day. When Ottoman conquests increased, and these troops did not respond to necessity, the Kap›kulu Corps, called "the devil's invention" by some European writers, was founded during the reign of Murad I (1362-1389) by taking advantage of Christian prisoners. The kap›kulu troops, consisting of janissaries, kap›kulu cavalry and artillery units, were full-fledged professionals.

While there was professional military service in the Ottoman Empire, European armies mainly consisted of mercenaries and troops sent by nobles. While the Ottoman army reached a size of 100,000 people, most of the European armies did not exceed 25,000 to 30,000 soldiers.

The aristocrats were commanders and their men were soldiers. In the 17th century, King Louis XIV of France gathered the aristocrats in his palace and created a large army composed of soldiers of the nobility.

Professional military service in France was a result of the French Revolution. When the war broke out in Europe because of the revolution, the law, known as "Levee en masse" envisioning collective military recruitment, was enacted in the National Convention on August 23, 1793. According to this law, all citizens were soldiers. Young men were asked to fight, married men to help with transportation and ammunition, women to knit uniforms and tents, children to collect cloths and elderly people to gather in the squares. This practice was valid during the French Revolutionary Wars, which enabled the French army to reach great numbers. This new system spread to continental Europe following its establishment in France.