Adnan Hoca and the kittens: A look into the world of cult 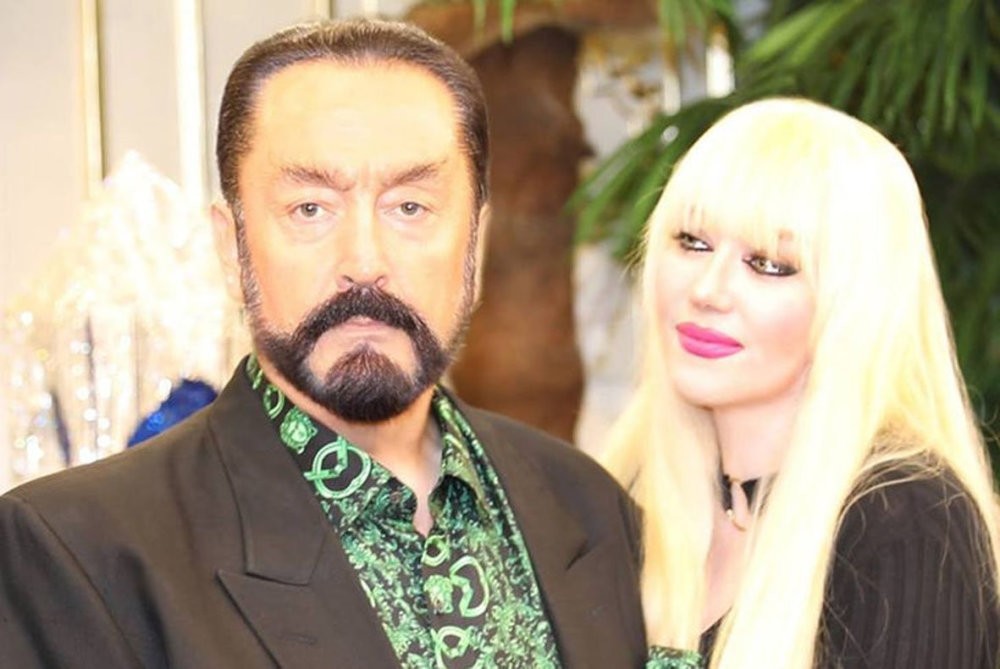 Cult leader Adnan Oktar and one of his female followers whom he addresses as ,kittens, seen together before his arrest on July 11.
by Şeyma Wills Aug 01, 2018 12:00 am

With the arrest of Adnan Hoca, the cult leader who has been operating his extravagant and bizarre organization for years, cults have come under the spotlight once again. But is it the charisma of the leader that lures followers to these cults or is there a whole process of brainwashing behind it?

"They train you to believe in things, like, 'if you do this, you are serving God.' They make you talk to friends about this, and if your friend doesn't accept it, suddenly you start to feel like there's a gap between you and them, and that gap widens. In the beginning, friends question you. 'Why are you with those weird people? What are you doing with them? Why are you changing the way you look?' But these people [from the cult] never question you. They only offer you support and happy friendships," says Ceylan who escaped from the cult of Adnan Oktar two years ago.

I was 13 when I first heard Adnan (so-called) Hoca's name from a friend of my cousin whom I thought was highly educated. She was reciting classic Ottoman poetry by heart on every topic in her daily conversations. She was from a very wealthy family and a graduate of the law faculty of one of the top universities in Istanbul. I never saw her again, it was a long afternoon meeting and the memory is still very vivid since after that meeting she took my cousin - who was in her late 30s and a divorcee, and a very beautiful and wealthy woman - to Adnan Oktar's country house. My cousin told us about that place many times with amazement. The property was basically an attempt to replicate paradise. There were several types of rare animals, golden fountains, marble statues, grand doors, luxurious furniture and lots of beautiful ladies and men everywhere. Oktar had a throne-like armchair and sat ordering everyone around in his famous Armani white suit. Luckily, my cousin did not have time to join the club in that meeting due to some family issues, she had to leave the place in a state of wonder. Later on she felt sad for the people who joined this group and thought the only sensible explanation could be that they were the victims of brainwashing. Confessions of those members, who call themselves murids to sound like spiritual disciples, who escaped recount the same thing that they had been fooled and abused; in other words brainwashed into staying there.

Adnan Oktar, the famous Turkish cult leader, and over 200 of his followers were taken into custody in a big police operation a few days ago. They were arrested on suspicion of a litany of charges, including running a criminal organization, tax offenses, sexual abuse and breaking counterterrorism laws. He is not the only cult leader in Turkey but certainly the most eccentric one I believe. This is not his first arrest in fact - he was taken into custody several times in the '90s for using fake videos to blackmail politicians and celebrities. He also has spent some time in a psychiatric hospital, which was a way out of jail for his previous sanctions.

What is intriguing about this man is, although he is undoubtedly similar to most cult leaders with his secrecy, kinkiness and manipulation he was appearing very openly in the media on his own TV channel and on social media, giving creepy sexual messages for his doll-like ladies (whom he called his kittens) and showing off honorary awards and appreciation he received from Masonic organizations.

One of his very close former followers explains his mystery: Here is one thing that Oktar does "very well, maybe the best in this world: He knows how to use people, and he knows [how to identify] people he can use." On top of all this, he has written several books in a rather corny evangelical style on Islamic creationism which were translated into several languages under his pen name Harun Yahya.

The world of cults

If we look at the term cult, it usually refers to a social group defined by its religious, spiritual, or philosophical beliefs, or its common interest in a particular personality, object or goal. Mostly of these groups of people voluntarily get together and act together.

As research and studies on several influential and famous cults show; the argument of "brainwashing" is not a sufficient explanation. The term brainwashing was founded by American journalist and CIA agent Edward Hunter during the Korean War to defend the American soldiers who had been captured. Hunter argued that the soldiers had been "manipulated" and "brainwashed" to confess that they were believers in communism. Hunter continues; the Chinese and Soviets found a way to brainwash people, which was based on wiping their memories and implanting new ones.

The CIA tried to crack this and worked with psychiatrists and they successfully managed to wipe the memories of a group of spies but they couldn't implant new ones and it messed them up. The experiments didn't give sufficient results so the CIA abandoned the program. At the end of the '60s new religions and cults arose dramatically in the U.S. These religions and sects attracted the children of upper class and upper middle class Americans and transformed them into radically different beings. Scientology and new fringe Christian movements came out around this time.

In the background of glamorous Hollywood stages, Scientology's method was this idea of a new form of controlling people minds - taking the bad stuff out of your mind, sorting your mind out so you can be a more complete person. This all seems very fitting with brainwashing though later studies showed that, the people who voluntarily left these sects or groups were not suffering the severe psychological episodes as the ones who were kidnapped or forcibly deprogrammed from the cults.

The members who voluntarily left the program mostly said the program made them wiser and gave them a valuable life experience. What this leads us to is very interesting, that the urge of searching or finding a new belief - even though it may lead to mental, physical, financial or often sexual abuse - can still be accepted as a life experience.

The rise of cults in the world and their odd/violent/abusing actions are no news yet the confessions of the victims of these cults address the fact that legal sanctions or social disdain is not curtailing the increase of these groups. People are not simply brainwashed as it may seem and following these cults for the sake of it. Turkey is not exempt from this social phenomenon.

Given the lack of importance placed on spiritual fulfillment in this materialistic age, the danger of believing in and following a phony spiritual leader blindly may be inevitable. Adnan Oktar, Fetullah Gülen, İskender Evrenesoğlu and many other cult leaders have all claimed to be the "Mahdi," a leader who is predicted to come and unite all Muslims. Hundreds of thousand people believe in them and spend their lives under their orders.

To immunize the masses from these odd ideas and beliefs, the Diyanet should emphasize and produce a new and stronger way of teaching the religion with charismatic, influential, young, presentable and eloquent imams who can speak several languages and who are groomed both intellectually and morally as people to be inspired by. The representation should be diverse in society so that different people can fulfill their spiritual needs through these people. The mosques must not be old man's clubs anymore but social, cultural and spiritual centers providing service for diverse age groups and individuals.