More than a sweet tooth: Ceremonial desserts of Turkish cuisine 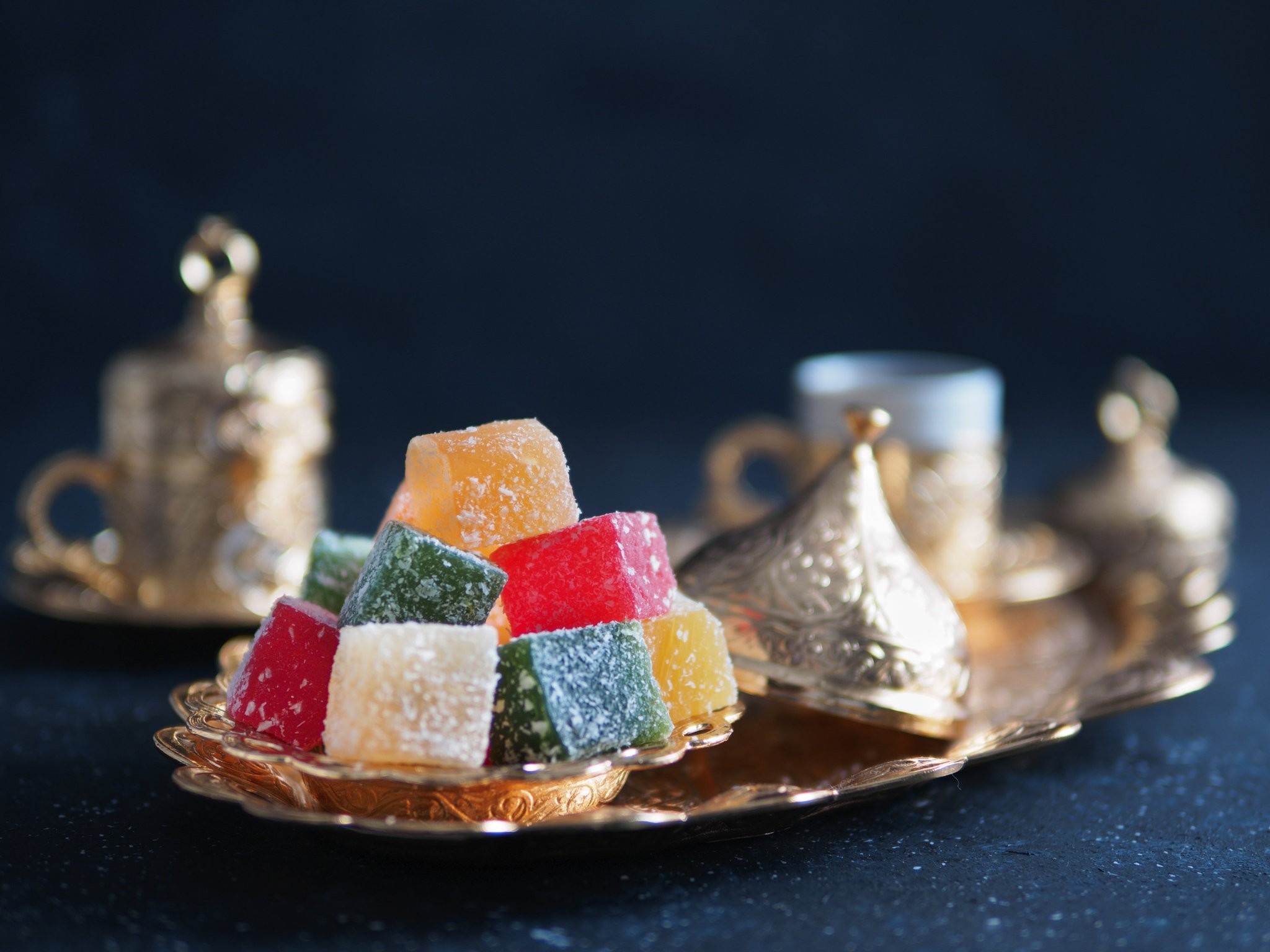 It took lokum (Turkish delight) two centuries to be considered a proper sweet in the Ottoman Empire, but since then it has become a symbol of Turkish culture.
by Amine Berra Yaşar Aug 04, 2018 12:00 am

Dessert is more than a meal course for the Turkish; it is a way to make your guests feel at home and create a warm atmosphere. It also plays a role in celebrating the living, the dead and the holy

"Let's eat sweet, talk sweet" is a famous phrase that relays how important desserts are in Turkish culture and cuisine. In Turkey, dessert is often a social ritual, a course meant to be shared. Desserts have always held a special place in Turkish cuisine and an important place among other foods. Offering sweets or something to drink to someone is one of the most honorable features of Turkish culture. They are consumed in ordinary daily meals in regular Turkish cuisine, too.

Desserts have different meanings when served on special occasions from celebrations to funerals. Here are some of the ceremonial desserts that you should know if you happen to come to Turkey and find yourself with a plate of Turkish dessert in your hand.

A well-known Turkish dessert "lokum" is the best gift to give, the best companion to Turkish coffee and an essential piece of religious feasts. It was first referred to as "rahat ul-hulküm" in Arabic which means, "comforting the throat," but in time it became "lokum" in modern Turkish. Turkish delight, which was an important part of the imperial kitchen of the Ottoman Empire, has hundreds of years of history. The production of lokum in Anatolia goes back to the 15th century; however it was not until the 17th century that it gained popularity and began to be identified with Turkish culture. Lokum began to be produced en mass toward the end of the 1700s in cube-shaped cuts, which is still the shape one identifies Turkish delight with today.

There are a variety of lokums such as the traditional and classic hazelnut ones as well as double roasted, with pistachio, rose, gum and saffron with chocolate coat if you want to go a little bit crazy. But back in the day, it was not possible to find different flavors in lokum. It is known that, at first, honey and molasses were used as sweeteners and flour was used for the consistency of lokum. In the second half of the 18th century, as Anatolia was introduced to refined sugar, it is began to be used in lokum production and other sweet foods instead of flour.

Lokum, the most wanted sweet in the Ottoman Empire for almost three centuries, was taken to Europe by a British tourist in the 18th century and where it began to be known as "Turkish delight" and soon was known around the world. Turkish delight is one of the best and valuable gifts that can be taken home after a joyful trip to Turkey. You can easily get a pack of lokum as a gift for your friends and family from the airports, stopovers or bus stations.

Güllaç, a combination of two words "güllü" and "aş", meaning "food with roses," is a traditional Ramadan dessert. It is preferred especially during iftar, when one breaks their fast at dusk, as it is a light dessert. You can see this traditional dessert in the windows of all pastry shops during the holy month. The history of güllaç dates back to the 15th century. At first, people made dough from corn starch which they dried during the summer. After softening the dough with milk and sugar they would eat it during winter. In the second half of the 15th century the sultan adopted this food, which was refined in the imperial kitchens, and became the dessert we know today. The dessert sometimes contains rose water, although it is optional. It is usually garnished with fresh pomegranate seeds and ground nuts such as walnuts or hazelnuts. It is also possible to see güllaç that is garnished with pistachio.

Halva's origins go back to the Middle East but it can be seen in many regions from the mountains of Eastern Anatolia to the Balkans. So, it is not surprising to see halva in all sorts of cuisines: Arabs, Turks, Jews and more eat it.

The Turks' first encounter with halva was after they accepted Islam as their religion and started to get acquainted with the Arabic culture. In the Ottoman Empire, halva had cultural value. Today, it is generally prepared at the home of the deceased after a funeral, where it is served to those coming and is also distributed to the neighbors. It is a tradition to prepare halva on the seventh day, 40th day and one year after following someone's death. 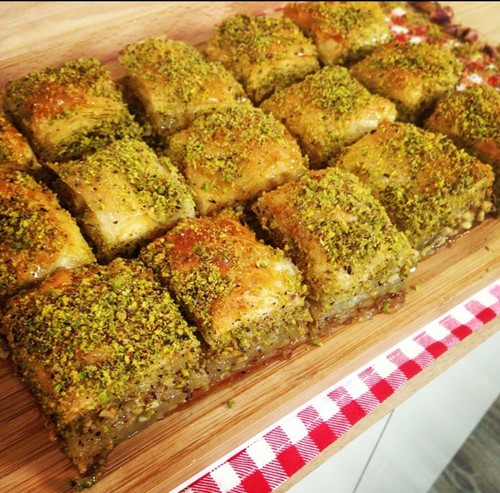 Baklava is by far the most famous dessert. With its richness and sweetness it makes for the favorite pastry of choice for Turkish feasts. Baklava is prepared by stuffing pistachios, nuts, or less commonly almonds or hazelnuts, between layers of dough leaves. The birthplace of this dish is the city of Gaziantep in southeastern Turkey that has long been identified with pistachios and baklava itself. It is known that in the Ottoman palace and mansions, the chefs who were experts in making the baklava were preferred. The chef to be recruited was given a baklava making test as well as a pilav (rice meal) test. The master of baklava was determined according to his talent of making the dough as thin as possible.

Before baking, the baklava tray was brought to the owner of the house; the owner would drop a gold coin on top of a tray from half a meters height. If the gold reached the bottom of the tray passing all of the layers, the chef was considered successful and the gold in the tray went to the chef as a tip. If the gold stayed on the layers, the baklava tray would be sent back to the kitchen. If this demonstration failed in the presence of guests, the landlord felt ashamed and disgraced.

Baklava was not only an important part of Turkish cuisine but also part of the state affairs of the Ottoman Empire as this sweet delight became the hero of a state ceremony. The tradition of "The Baklava Procession," which emerged in the late 17th or early 18th century, is the most prominent example of this. In the middle of the month of Ramadan, a baklava baker came to the palace. One baklava tray for every ten soldiers was prepared and lined up in front of the imperial kitchen. After Silahtar Agha took delivery of the first tray on behalf of the sultan, other janissaries took their trays and walked out in the winter month from the open doors. The people of Istanbul poured onto the streets to watch the baklava procession. This tradition, which made baklava a symbol of the Ottoman reign, became history with the janissaries.

The last baklava procession was made two months before the guild of the janissary was removed. The oldest Ottoman record about baklava is in the Topkapı Palace kitchen books dating back to the reign of the Mehmed the Conqueror. According to this record, the first baklava was baked in Sarajevo in 1473.

Aşure, the oldest dessert in history of mankind, also known as "Noah's pudding," is a fruity dessert that also fulfills an important social and ritual function. Aşure is a festive pudding of cereal grains, sugar, and raisins. According to legend, it was originally concocted in the galley of Noah's Ark from whatever was left in the pantry. The pudding is served traditionally on the 10th day of the month of Muharrem according to the Islamic calendar and distributed to the neighbors and loved ones. The term aşure originates from the Arabic word "ashara" which means ten or tenth. It is believed that it is not just a dessert, but is first and foremost a symbol of sharing, solidarity, love, wealth and a symbol of our life together.