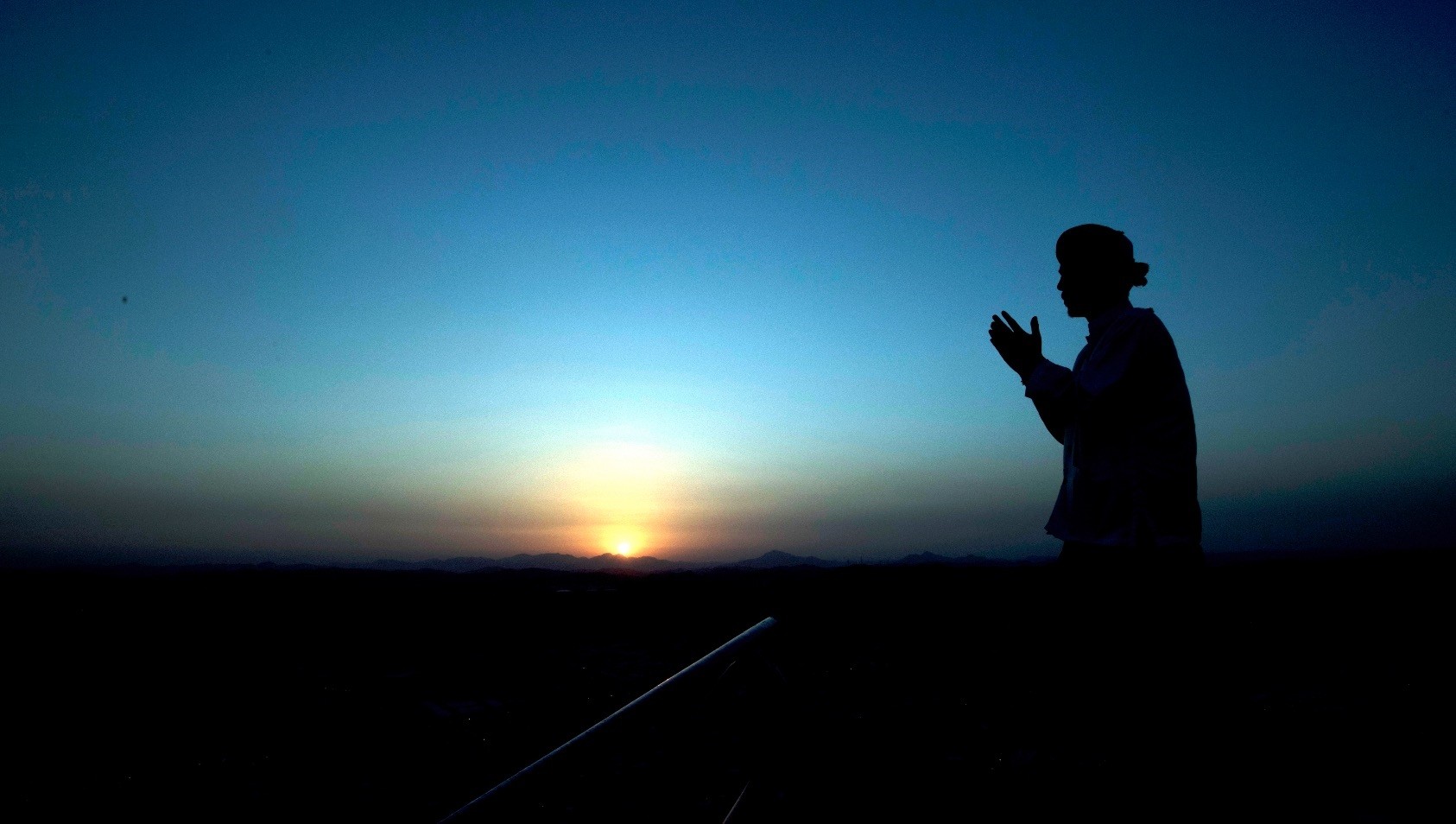 A Muslim pilgrim prays at Jabal al-Nour while visiting the Cave of Hira during the annual Hajj pilgrimage in Mecca, Saudi Arabia.
by Mushtak Parker Aug 21, 2018 12:00 am

Qurban Bayram, or Eid al-Adha in Arabic, is a time for sharing what you have with those in need, as millions of Muslims live in poor economic conditions worldwide

On Monday, Aug. 21, 1.5 billion Muslims worldwide will celebrate Qurban Bayram (or Eid al-Adha in Arabic), the festival that marks the end of the Muslim pilgrimage to Mecca in Saudi Arabia, known as the hajj, which is one of the five pillars of Islam. Not surprisingly, in some countries, like Malaysia and Indonesia, it is also referred to as the Lebaran Haji (the Pilgrims Celebration Day).

Qurban Bayram falls on the 10th day of Dhu al-Hijjah, the month of the hajj in the Islamic lunar calendar, and symbolizes the willingness of Prophet Abraham to sacrifice his son as an act of obedience to God's command, hence the occasion's sobriquet as "The Festival of Sacrifice." In the Maghrib countries and Egypt and Yemen, it is also known as Eid al-Kabir, the "Greater Eid," as opposed to Eid al-Fitr, the "Lesser Eid," which marks the end of the Muslim holy month of fasting, Ramadan.

While Eid is a joyous occasion of festivities and celebrations for family, friends and pilgrims alike, it is also a solemn festival as the Quran reminds in Sura Al-Mai'ida, behooving Muslims not to forget the poor and needy, who cannot afford to celebrate the occasion. Millions of Muslims in affluent countries revel in consumption, but there are equally millions of their coreligionists for whom starvation is a permanent way of life because of famine, poverty and corruption. Some 22 member countries of the Organisation of Islamic Cooperation (OIC) are classified as "least developed countries" under U.N. criteria, with many living below the poverty line.

It is also a timely reminder that despite the turmoil in the Muslim world, including the destructive conflicts in the Middle East, Afghanistan, Pakistan and Africa, the onslaught of Islamophobia especially in the U.S. and Europe, and the wanton attack on economies and financial systems of Muslim countries, such as the current tariffs levied by U.S. President Donald Trump against Turkey, the Eid in general remains an occasion when the Muslim community rallies in solidarity, sacrifice and yes, revelry.

Eid traditions differ from one country or region to another, reflecting the tapestry of diversity and universal aspects of Islam as a faith. Just look at the variety of names "Eid al-Adha" is known as, incorporating the specific sociocultural nuances of the various countries. In Turkey, it is "Kurban Bayramı" (the Holiday of Sacrifice); in Malaysia and Singapore its Hari Raya Eid al-Adha or Eid al-Qurban; in parts of Pakistan and India it is Bakri Eid (literally the Goat Eid); in Egypt, Saudi Arabia and the Gulf states it is Eid al-Baqarah, (the word Baqr is mentioned in the Sura Al Baqarah, the Verse of the Cow, in the Quran); in Uzbekistan it is Qurbon Hayiti and in Iran Eid-e-Ghorban.

Whatever the name, the occasion is a boon for all, especially children, who are showered with clothes, gifts and money, and activities like fun picnics and of course, cuisine and sweets, especially cakes, baklava and halwa.

Overindulgence, however, is the antithesis of the Eid ethos, which has the entrenched principle of giving. In Cape Town, for instance, Muslim charities organize mass free Eid lunches or dinners donated by the Muslim community for the poor in deprived townships, and toys and other gifts for the children irrespective of their faith.

The ultimate inclusivity of the Eid in my experience is the "open house" practice in Malaysia, which could not better encapsulate the spirit of the holiday, and for that matter Christmas and Diwali - the three main faith festivals in the country. It literally means what it implies - the house is open to family, friends, neighbors and visitors on the Eid, irrespective of their faith, all celebrating the occasion with a never-ending supply of festive food in a spirit of mutual togetherness. I still fondly remember the Eid open house I visited many years ago of none other than then Prime Minister Mahathir Mohamed.

The ultimate principle of giving and inclusivity is entrenched in the very meaning and practice of Adha or Qurban (sacrifice). In commemoration of Prophet Abraham's willingness to sacrifice his son, only to be provided a male goat through divine intervention instead, an animal - usually a goat, lamb or sheep - is sacrificed during the Eid and distributed, with a third of the meat given to the poor and needy; another third is to relatives, friends and neighbors; and the remaining third used by the family.

With 2 million Muslims descending on Mecca for the hajj each year, the logistics of processing the ritual sacrificial meat used to be daunting. But thanks to the multilateral Islamic Development Bank (IsDB) in cooperation with the Saudi government, eight of the world's most state-of-the-art animal slaughtering and meat processing complexes utilizing nitrogen freezing and preserving technology and canning were built in the holy sites of Mecca, Mina and Muzdalifah, Saudi Arabia, ensuring that the sacrificial meat donated by the participating pilgrims is transported to the poor post haste to the 25 intended IsDB-member countries and to the Muslim diaspora all over the world.

Through the Saudi Project for Utilization of Hajj Meat (Adahi), introduced in 1983 and managed by the IsDB, pilgrims can purchase an Adahi coupon (fixed at $127 for this hajj), whereby an animal is slaughtered on their behalf and distributed to the poor. Last year, for instance, more than 1 million sacrificial animals were slaughtered and processed in a mere 84 hours by a staff of 40,000, which underlines the modern technology, high quality of animal husbandry, and efficient, effective processing and distribution. The alternative is for pilgrims to arrange their own private sacrificial ritual, which could be fraught with problems.

Economic side of the Eid

It would be naive to think that the Eid is merely about festivities and sacrifice. It, together with Ramadan and the hajj, are equally important socioeconomic and business endeavors. This is due to the globalization of the halal economy, in which the halal brand has become a powerful global one. Given that the global halal economy - excluding the estimated $2.6 trillion global Islamic finance industry - is estimated to be worth between $2.5 trillion-$3.6 trillion, of which halal food, fashion, lifestyle, tourism and pharmaceuticals are the largest components, the reality is that it has become "too big to ignore, let alone fail." The halal label is now assuming global brand proportions and is no longer confined to Muslim consumers but increasingly accepted by consumers irrespective of creed. The growth rate of the halal economy has been truly dynamic.