When despair becomes a way of life 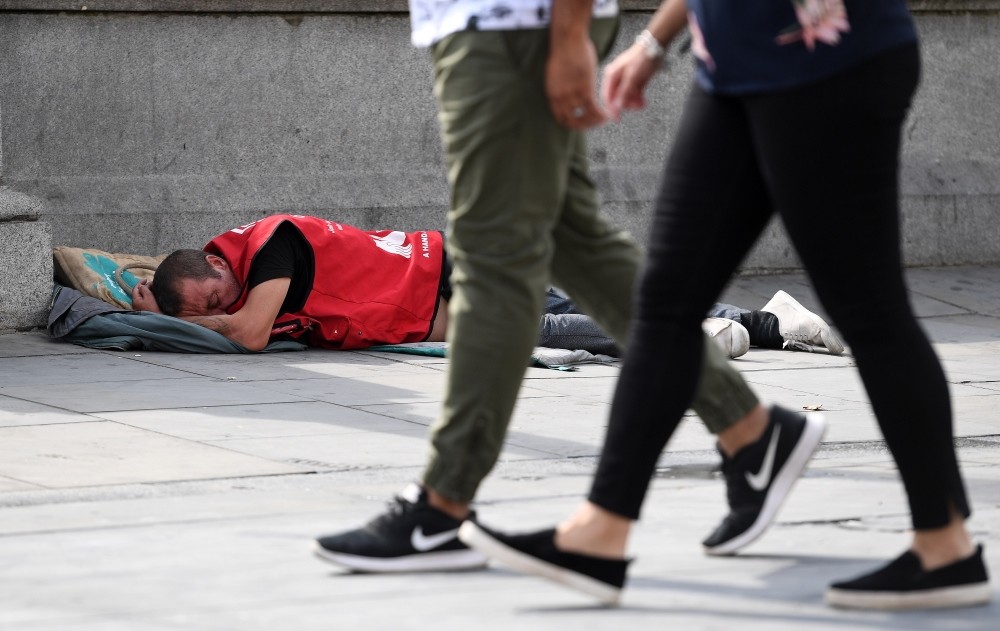 Poverty is a problem that most people are concerned with; we worry about children in African or Asian countries having enough to eat. But how much do we think about the families that face poverty in developed countries?

Last week, we had a great breakfast of pancakes and fruit on a Sunday morning; after finishing eating, we headed out into the empty streets. The sun was gently shining, making the day beautiful and welcoming.

As we walked down the narrow lanes, a young man approached us. He was thin - skinny even. His bones protruded out of his face; as he approached he averted his eyes, out of shyness, out of embarrassment.

We looked around us and spotted a coffee shop just down the road. I asked the young man to come with us. "Could I have hot chocolate and a croissant," he asked. We got him hot chocolate, croissants and something for lunch. I paid extra to allow him to sit in the coffee shop; we wanted to ensure that he would have somewhere dry, clean and pleasant to eat his meal. I handed him the change from the meal, saying, "Please take this as well."

"If you could give me just a little more, I can get a space in a hostel tonight," he said. I gave him the little amount he had asked for.

A few nights later we had a slap up evening meal. We chose to sit by the window. Later, I understood why other people had chosen not to sit by the window. As we were waiting for our meal, a different young man came up to the window, leaned against it; pointing at his mouth and then at his stomach, he indicated that he too was hungry, very hungry. We did not really know what to do, and by the time we had decided that we could amend our order to include something for him, the young man had left.

When our meals arrived, we were astounded by the size of the plates. There was far too much on each plate for us to eat. We asked for a take away container and loaded half of each of our meals into it. When we left, we took the take away container with us in the hopes that we would find that young man and be able to give him something to eat. However, he was long gone.

We started to walk toward the bus stop. Along the route were a number of people, sitting in strategic spots, begging. We honed in on a middle-aged woman. "Are you hungry?" we asked her. "Yes, very" was the answer. "Would you like this?" we asked. "Oh thank you!" she exclaimed, beaming with gratitude.

We were not in Istanbul. I have yet to meet a beggar who thanks you for giving them food in Istanbul. It is common knowledge that the majority of beggars in Istanbul are controlled by nefarious organizations. I have been told by beggars that they can make around TL 300 (approximately $46) per day. There are those who go home in taxis. This is not to say that there are not genuine people in need in Istanbul. There is poverty in Turkey. But the support of society, of NGOs, and so forth is great in helping meet the needs of those who live under the poverty line. Even political parties do their bit to help those in need. Political parties have an intricate and extensive network, and thus are able to mobilize and collect food, fuel and clothing and get the same to those in need as quickly as possible.

No, the place where we were eating, the city in which every day a number of beggars approached us asking for money was not Istanbul. It was not even a third world country. It was London.

The number of people sleeping rough, living on the streets, trying to find a meal through begging in the capital of the U.K. is shocking. Every time I go there, this number seems to be getting greater.

And the same thing is true in America. Not just in New York or Chicago. In Boulder, Colorado, which to all intents and purposes is a university town, a middle-class town, there is a "pan handler" on every corner. When I first started going there 15 years ago, I cannot remember seeing anyone begging. But in recent years, it is impossible to go down a street without seeing someone with a sign saying, "Hungry and homeless, please help."

What has happened in these countries, two of the most powerful in the world, that has caused unemployment, homelessness and begging to grow at such extreme rates? What has happened in the case of the U.K. is simply the slow but sure dismantling of the social system that had been introduced post war; this started with Thatcher, and it has just gotten worse and worse. Benefits, housing, even the NHS have been hit hard, and people are finding it hard to meet ends.

The situation in the U.K. is not actually one of unemployment. People who have jobs still find it impossible to make ends meet. With high rents, high cost of transportation and food, people in low paid jobs, like cleaners, hairdressers or retail assistants, make less than 1,000 pounds per month. They cannot make ends meet.

In the U.S., things are the same, or even more bleak. People in low-paid jobs often find themselves forced to take out loans to pay their monthly commitments. These so-called "payday loans" have an interest rate of 400 percent. Often university students find that they have to take out such loans just to pay their rent. And then they have to try to pay off the interest... sometimes it is impossible for them to catch up.

In postwar America, a safety net of public assistance was established; the idea was to help prevent people from falling into poverty. However, since the 1970s successive presidents have nipped, tucked, cut and sliced off bits of public assistance. Americans now can only receive a maximum of five years of assistance. Applicants have to undergo drug tests and sometimes even give fingerprints. In 20 years the number of people receiving benefits in the U.S. has fallen from well over 4 million to just 1.1 million. Yet, more people are living in poverty now than 20 years ago. Today, 40 million Americans are living below the poverty line. Half of these are living in what is called "deep poverty;" that is, they have an income that is less than one half of the poverty threshold. There are also those who live in extreme poverty, living on less than $2 a day, who do not qualify for assistance, who cannot get any help.

According to an article in Time Magazine ("States of Vulnerability"), "The promise of America says that if you work hard - if you sacrifice - you, or at least your children, will succeed. But too many Americans today are sacrificing into an empty void, with no returns for generations. At a certain point, it's not sacrifice anymore - it's just suffering..."

"They're people returning from prison with no path forward, beyond a criminal-justice system so broken that every sentence carries a life term, and finding they are barred from living in public housing or receiving financial aid for college."

A report last year, commissioned by the United Nations, discovered that the poor of America suffered from homelessness, poor sanitation and dangerous sewage disposal; they were subjected to a high rate of police surveillance and criminalization. The report stated that the poverty and inequality that prevailed in certain areas and communities "are shockingly at odds with [the United States'] immense wealth and its founding commitment to human rights."

The prison service in America is oversubscribed. With each new president promising a crackdown on crime, more and more poor people find themselves serving life sentences (which today means LIFE with no chance of parole) for crimes often instigated only by hopelessness and despair.

Research carried out by the BBC into people living in extreme poverty in the U.S. discovered that four in every 10 of these people were actually working. One out of every 10 had full-time, year-round employment, but could still not pull themselves out of poverty.

Another shocking fact is that twice as many African-American families live in poverty than white families. The reason for this can be (and should be) traced back to the emancipation proclamation.

After the Civil War, reparations were promised to former slaves. They were promised land with which they could start a new life. The federal government confiscated 400,000 acres of private property from Confederate landowners, and they planned to redistribute this land to former slaves. General Sherman convened a commission, which included former slaves, to find out what the African Americans really wanted. The answer? Reverend Frazier, who headed up the delegation of former slaves, stated that what they wanted was land because the best way to be able to take care of themselves was to "have land and turn it and till it by our own labor ... and we can soon maintain ourselves and have something to spare ... we want to be placed on the land until we are able to buy it and make it our own." It was after this conversation that Sherman issued Special Field Order No. 15, which stated, "Each family shall have a plot of not more than 40 acres of tillable ground." This order became known as "forty acres and a mule." The order was later signed by President Lincoln.

However, this revolutionary, innovative approach to helping those who had been kidnapped, enslaved, sold, beaten and inflicted with other abuses of their human rights did not last long. The law was overturned soon after Lincoln's assassination. Andrew Johnson, Lincoln's successor, sympathized with the South. He quickly returned the confiscated land to the landowners.

The Special Field Order would have ensured that the former slaves had something with which to start their lives. Instead, they had to start on a new life with nothing: no home, no property, no job, no income. So too often the struggle to make a start continued down the generations, reaching the situation in which many find themselves today. The struggle of many Native Americans to conquer poverty is another example. The reason for so many people being so poor is not just the failure to provide reparations to those who had been abused of their fundamental rights; there are many factors that have led to the sad state America finds itself in today. But it is indicative of the failure to give help when and where it is needed most.

A person living in deep poverty stated the following during a report by the BBC on American poverty: "Poverty grew under Obama. The neighborhoods are falling apart not because the people are bad; they are underpaid, undereducated, and many have been living like this for a second and third generation. We don't know how to change; despair is a way of living."