The last days of Suleiman the Magnificent 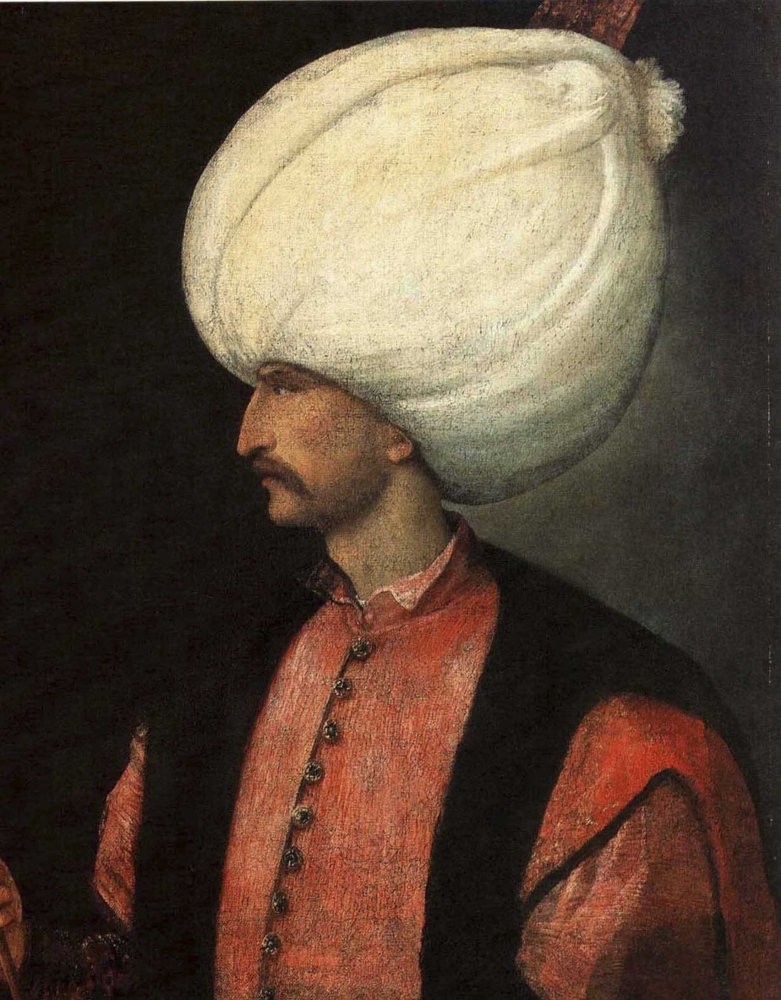 A portrait of Suleiman the Magnificent attributed to the Italian painter Titian.
by Erhan Afyoncu Sep 12, 2018 12:00 am

Despite his old age, Suleiman I, one of the greatest sultans that ever ruled the Ottoman Empire, went on a campaign knowing that he might not return. During the siege of Szigetvar, his vizier hid his sudden death from the soldiers to preserve the morale of the troops

Suleiman I, known as Suleiman the Magnificent, decided to officiate a campaign in Austria in 1566 despite his old age and the fact he was suffering from illness.

He visited the tombs of Abu Ayyub al-Ansari and ancestors before campaigning and gave vast amounts of alms to poor people at these tombs. On April 29, 1566, the sultan and statesmen departed from Istanbul amidst a great ceremony.

The sultan left Istanbul wearing white clothes, riding his horse, followed by his cortege. Historians of the period say that the sultan resembled a minaret of divine light with his white beard and clothes.

Suleiman I campaigned even though he physically had little energy left. On the road, his illness acted up again and the sultan was taken to a carriage with the help of Sokollu Mehmed Pasha. Going to Szigetvar in the carriage, the sultan mounted the horse when they reached the city center despite his illness in order to not overshadow the fame of the monarchy.

They performed a situational assessment when they reached Belgrade. The first intention was to conquer the Eger Castle but the information received from the borders said that it was the stronghold at Szigetvar which was more of a threat to the Ottoman lands. Thereupon, the army re-directed to Szigetvar. It was comprised of four castles that were linked to each other and surrounded by water canals and known to be hard to conquer.

When they arrived at Szigetvar, Suleiman I, who rode his horse in order to reassure the soldiers then went to his tent, walking after dismounting the horse.

The siege of Szigetvar started on Aug. 7, 1566. The sultan, who could not go out because of his illness, followed it from his tent. The old sultan's illness was getting worse but the castle could not be taken in any way.

As the period of the siege got longer, the sultan said: "This castle burned my heart, I beg of God it will burn into flames." After awhile, Szigetvar was conquered.

The Austrians, who could not keep up resistance, retreated to the castle, setting fire to the city. The Ottoman artillerymen started to target the castle but nothing could dismay the strong commander Nikola VII Zrinski.

Sokollu Mehmed Pasha tried hard and did his best to conquer the castle as soon as possible. He was sleeping alongside the soldiers in the trenches on some nights. He even narrowly escaped death.

On the last days of the siege, the illness of the sultan got even worse and rumors spread in waves among the soldiers.

Finally, a bomb installed by a Turkish bodyguard who climbed the castle walls created a gap in the wall, and on Sept. 5 as Ottoman soldiers started to enter the castle via this gap, Zrinski, who saw that there was no defense possible, retreated into the inner castle.

While Szigetvar was about to fall, Suleiman the Magnificent passed away on the night of Sept. 7. The siege was coming to the end. In such a situation, the death knell of the sultan could cause the one-month-long effort go down the drain if it was heard among the soldiers. The Grand Vizier, Sokollu Mehmed Pasha, ordered those who knew of the death to keep it a secret. He also said the sultan would be buried under where he had lived, after all the necessary procedures were performed. The body of the sultan was put under his throne temporarily after his internal organs were taken out, musk and amber smells were applied and a funeral prayer was secretly performed. A man also laid the bed of the sultan like a patient.

With the encouragement of the grand vizier, preparations for the last attack were made. The Ottoman soldiers took the inner castle, the last point of resistance in Szigetvar, in a short time. Therefore, Szigetvar was conquered on Sept. 7.

The Grand Vizier Shahzade Selim II (the son of the sultan), the only successor to the throne and Sanjak-bey of Kütahya, managed the conquest of the castle, sending a letter reporting his father's death.

He spent time around Szigetvar so that Shahzade Selim could reach the army. When he learned that Selim II had passed Rumelia, the grand vizier directed the army to Belgrade.

As they got closer to the castle, hafiz people started to read the Quran. The officials around the sultan who understood the situation wore black turbans. The knell spread; the whole army started to lament and cry. There was a moment when the soldiers stopped walking. They were crying and saying "Hay Sultan Suleiman."

Sokollu Mehmed Pasha went up to the soldiers and asked them why they stopped walking. "Brothers, fellows... Let's bid farewell to the Islam Sultan of many years with the Quran. He made Hungary an Islamic country. He fed all of us with his benevolence. Is this our response to him? Aren't we going to carry him over our heads? His son Selim II waited for you for 17 days in Belgrade. Our late sultan spoke in his will about our wage increase and tips to him. Do not stop hafiz people! The cure for our pain is the Quran," he said and calmed the soldiers.

Selim II met the funeral of his father, whose death was kept a secret for 42 days, by wearing a black kaftan. People prayed in front of the carriage which carried the sultan's body. His coffin was put on the coffin rest, and the second funeral prayer was performed. Later, the sultan's funeral set off for Istanbul with another group, apart from the army, and was met by the cries and prayer of people along the way.

The funeral of Suleiman the Magnificent was brought to the place where his tomb was planned to be built in the Süleymaniye Mosque after a third funeral prayer was performed by Shaykh al-Islam Ebussuud Efendi.

A tent was set up over the grave as the tomb was not built yet. The sultan was buried in the grave that was prepared under the supervision of Mimar Sinan. Thus a chapter of history came to a close.

Suleiman I was 72 when he died and he was on the throne for 46 years. He was the one who stayed the longest on the throne among the Ottoman sultans. His period was so magnificent that those who wrote reform projects in the 17th century, the depression years of the Ottoman Empire, spoke of this period as the "Golden Age," to which they should return. The sultan was a tall man who has a round face, hazel eyes, distinct eyebrows and a falcon nose. He liked to chat with scholars and poets. He was a skillful artisan in jewelry, which he learned to make when he was a shahzade. He wrote poems under the pen name Muhibbi. He was good at using swords and liked hunting. It is said that he knew Arabic, Farsi and some Slavic languages along with the Tatar dialect.

The title of Kanuni, which means the "lawgiver" in Ottoman Turkish, was not adopted by him or given to him by the poets of the period. He was known as the Suleiman the Magnificent or the Great Turk by the European writers of his period. According to the research of Feridun Emecen, the title of "Kanuni" was used by Dimitri Kantemir, who wrote about Ottoman history in the 18th century. Kantemir gave this title to him, focusing on his lawmaking. The next generation of poets adopted this and called him Kanuni.