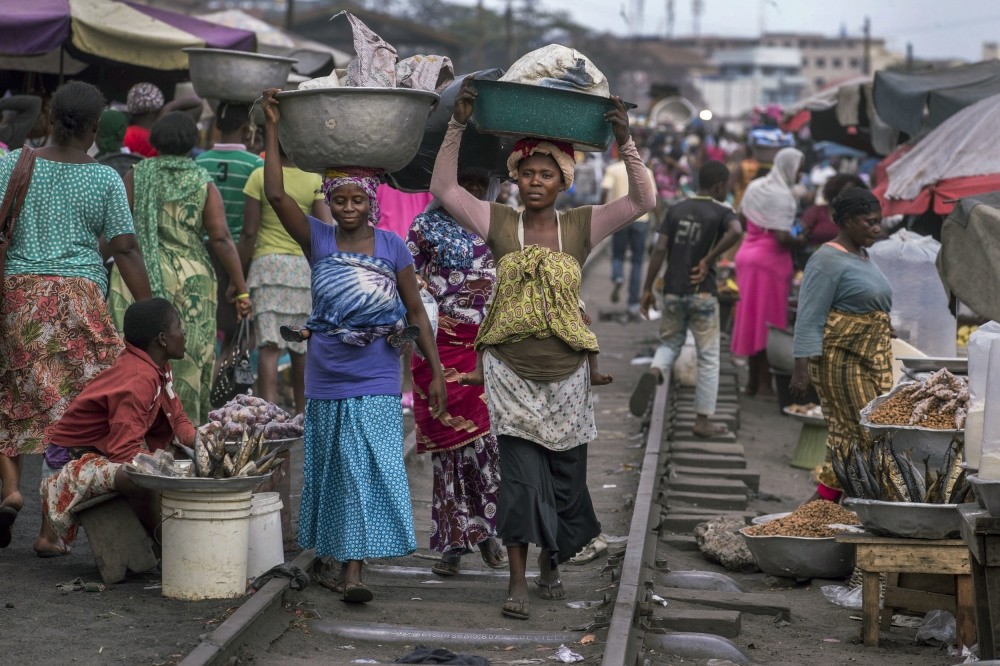 Women make up the majority of Accra's informal workers, who account for over 80 percent of the city's working population.
by Sep 21, 2018 12:00 am

For years, street vendors in Ghana's capital have been displaced by city authorities without any concrete reason, but this time around women took the matters into their own hands

In a junk-strewn lot on the outskirts of Ghana's capital, weary-looking street vendors gathered to hear their leader Vida Tangwam passionately protest their impending eviction. The women - among them high school drop-outs and single mothers - were usually treated like "nobody" by city authorities, Tangwam said.

For decades street vendors have been forcibly, and sometimes violently, cleared off the streets of Accra, say civil society groups. But when some 2,000 vendors in Madina, an Accra suburb, heard they would be evicted in June, something unexpected happened. The women refused to leave without a new, safer working space, and the city council gave them one.

"It's because of the togetherness in the market that made them to have one voice. And I think that voice was heard," said Tangwam, who is vice president of the Informal Hawkers and Vendors Association of Ghana.

It was the first time vendors had pushed back with such success - normally if they are given an alternate marketplace at all, it is unusable, said the advocacy group Women in Informal Employment: Globalizing and Organizing (WIEGO). But the case is indicative of a growing trend: street sellers and slum dwellers are increasingly gaining recognition in Accra as they become better organized to speak out, said WIEGO and People's Dialogue, a Ghanaian organization that supports the urban poor.

"The engagement opportunities (with the government) have improved," said Dorcas Ansah, WIEGO's country coordinator, who was in touch with the Madina vendors as they fought their case. "In Madina, we didn't have to go with them. They knew what they had to do," she said.

Women make up the majority of Accra's informal workers, who account for over 80 percent of the city's working population, according to the government. They dominate small trade and retail, contributing to Ghana's ranking as one of the countries with the highest proportion - at 46 percent - of female business owners worldwide, according to a 2018 index of women entrepreneurs by credit card firm Mastercard.

That makes the stakes even higher for many street vendors, said Ansah. Male vendors are evicted as well, but there are far fewer of them. "Women support the men," said Akua Agyeawa, who sells used clothes in Madina and is the primary breadwinner in her family. "I will not get support from anywhere if I lose this job."

Mass evictions happen every few years in Accra, often after an election cycle when new governments commonly pledge to "clean up" the city, said Ansah of WIEGO. This year the Accra Metropolitan Assembly (AMA) launched a new "decongestion exercise" to clear traders off streets and pavements downtown.

AMA spokesman Gilbert Ankrah said he did not know how many people have or would be evicted, while activists put the number at thousands. The city of about two million is getting more crowded as people move in from poorer, rural regions, experts say, and markets are overflowing with traders selling everything from plastic sandals to dried fish.

"We want to create an environment where people will be able to move about more freely, unlike currently where they are competing with lorries on the roads," Ankrah told the Thomson Reuters Foundation.

The city is looking into creating new marketplaces, he said, but so far none have been provided for vendors evicted from the central business district this year.

Ankrah said there is space for most of them in existing markets and that they move out to the pavements to get more customers.

"The challenge is some of the women come back, but we have our task force to ensure that we move them," he said.

But workers said crowding in the markets is a serious problem. "We need expansions of our markets," said Tangwam, weaving between cars and piles of goods one weekday in Madina. "We pay taxes to the government, so we think that whenever there's a problem they should be able to involve us to come up with the final solution."

It took several months of discussions and even radio interviews for the city and vendors to reach an agreement in Madina, said Tangwam. The women were first told to move to a muddy field with no toilets, streetlights or storage. After the municipal assembly provided the requested amenities, they willingly relocated. The assembly is now preparing to set up a market office, a security post and a daycare center, said spokesman Isaac Odoom.

It was a far cry from the typical eviction, where women sometimes arrive to work in the morning to find their kiosks destroyed and goods confiscated, said Ansah from WIEGO. "There's a local saying that if you throw a frog, you don't care where it lands. So normally, that's what happens (with evictions)," said Kojo Anane, a programme officer at People's Dialogue. There are signs this could be changing for slum dwellers too, he said. Accra's largest slum, Old Fadama, is home to about 100,000 people who have faced eviction threats for decades. Now the conversation with authorities has shifted toward relocation, said Anane, though challenges remain. Replicating the Madina success would be harder in the city centre because there is so little space, said Ansah. But she hopes the lessons will stick. "It's a good sign of the municipality understanding that they cannot continue to use force with the workers and that it pays to have engagement, it pays to discuss," she said.