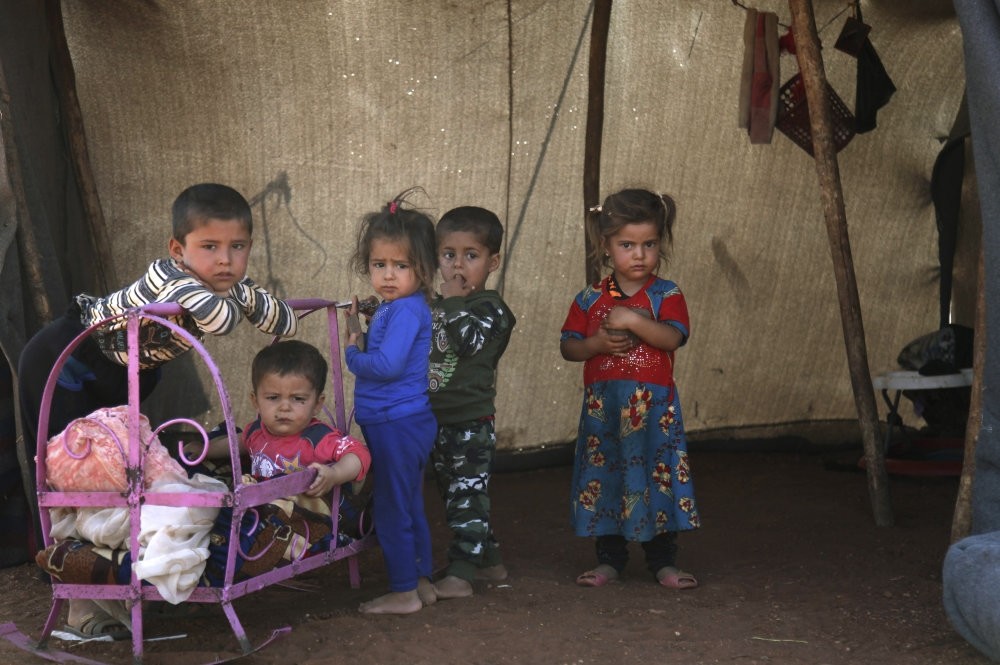 Yemen, Syria, Iraq, Afghanistan, Egypt - The youth of these countries face a bleak future. How many more generations are to be lost before people say no to proxy wars that are destroying innocent lives?

The humanitarian crisis in Yemen is no surprise. In fact, last January, in this very column what was happening in Yemen was discussed.

"It is estimated that 18 million people of the 27 million population are on the brink of starvation. The vast majority of the population are malnourished and in danger. Cholera is spreading throughout the country, and with the delivery of medical aid blocked by land and sea - the future is grim for Yemen.

... The Yemeni crisis is the worst humanitarian crisis in the world. 80 percent of the population does not have enough to eat. ... Food is scarce, medical supplies are scarce. Vaccines are scarce... Fuel prices are rising (by nearly 100 percent). Inflation is rampant, making it harder for people to find food, heating and basic goods.

The Saudi-backed coalition is bombing schools and hospitals... The citizens of Yemen have no infrastructure because the Saudi-led coalition is dropping American and English-made weapons on Yemeni civilians.

And yet, the situation in Yemen does not make the front page. We are not as aware of what is happening in Yemen, as we are aware of what is happening in Myanmar or Syria. The disinterest is not a matter of proximity. Myanmar is not near, but it remains close to our hearts. Nor is this disinterest a matter of religious sensibilities. Rather, (the reason for) the lack of forceful reporting is ... little interest..."

This week, all that has changed. Now, there is interest. Every front page is discussing the Yemeni crisis. The numbers of people dying and at risk are even greater than they were nine months ago. This is the crux of the matter. How great do the numbers have to grow before we sit up and take interest? How many children have to starve to death? How many people have to die?

Now, it seems likely that the Yemeni crisis will take center stage, pushing the Syrian crisis into the wings. The Syrian crisis actually took the stage from the Iraqi crisis, which superseded other crises...

There are so many nations that have faced or are facing serious threats to human life. War, invasion, bombs, starvation...

People are dying all over the world. Poverty and hunger are insurmountable problems for people on the African continent, on the subcontinent, in South America, in North America, even in Europe.

But in Europe and America, there is more hope for the starving huddled masses. The infrastructure is intact. No one is dropping bombs on their schools; no one is targeting their hospitals. Even if some Europeans and Americans cannot afford medical care, even if they are outside the health or education system, these systems are functioning.

The tragedy in Yemen is that a generation will be lost. Since 2015, when a coalition of Arab States - Kuwait, UAE, Bahrain, Egypt, Morocco, Jordan, Sudan and Senegal joined forces to "defeat" the Houthis - children have died. Schools have been bombed. Teachers not only have not been paid, they don't have classrooms. If they have classrooms, they don't have students. 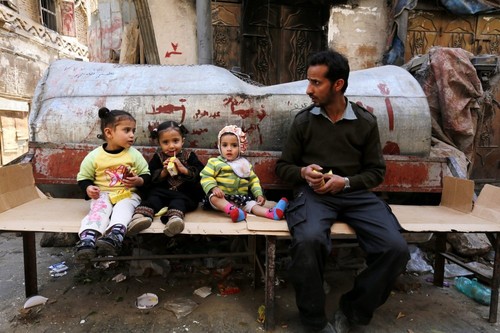 A Yemeni man and three children sit side-by-side in front of a bombed building in the Yemeni capital of Sanaa.

Any war is a tragedy. The death of civilians is always a tragedy. But there is a deeper tragedy, one that is often overlooked. While bombing "the enemy," while fighting against "the enemy," the infrastructure is shred to pieces. Life "as normal" stops. People are no longer able to work, as their workplace no longer exists. People are starving and not getting medical attention, they lose their homes, their limbs... All of these are horrific events. But what is also horrific is that when the dust settles life does not return to "normal."

In Yemen, even if the bombing, the starvation, the cholera and the lack of medical care were to stop tomorrow, the problems would not end there. Getting education back on its feet will take years. For the employment market to have any vitality will take years. Even the basic establishment of order will take years. And in these years an entire generation will be wasted.

There is a difference between Syria and Yemen: As written in the New Yorker "Is Intentional Starvation the Future of War:?" "In Syria, the images of starving children in rebel-controlled Eastern Ghouta, at the end of last year, were the latest evidence of the Assad regime's use of siege-and-starvation tactics. With the support of Russia and Iran, the Syrian government has starved civilian enclaves as a way to pressure them to surrender. In Yemen, none of the warring parties seem to be systematically withholding food from civilians. Instead, the war is making it impossible for most civilians to earn the money they need buy food - and exposing a loophole in international law. There is no national-food-availability crisis in Yemen, but a massive economic one." That is, people are deprived of work, of income, of the ability to earn their daily bread.

As said above, the tragedy in Yemen goes beyond today's tragedy. If a child manages to survive this terrible time, this onslaught of aggression in a proxy war, what does the future hold? There are reports that child marriage in Yemen is already on the rise.

Before you gasp, and cover your mouth

with your hand in shock and horror, think about it. If you were the father of three, four, five or more children, if you had no income, if you couldn't buy food, fuel or medicine, and if someone came and said, "I would like to marry your 15 old daughter," and if this man had food, fuel, shelter and income, would you not consider this proposition? And what if your eldest daughter were 13, or 12? Would it be kinder to let her starve, or to marry her to someone who can provide for her, taking some of the pressure off your efforts to feed the rest of your family? It is reported that the large majority of girls are now being married (notice I do not say "getting married") before the age of 18. Many before they turn 15.

That is Yemen. We know that there is a lost generation in Syria. The young people growing up there today have very little hope for the future. And now it seems that the same will be true for Yemen. Another lost generation.

But what about other countries where there have been wars? What about Iraq, for instance? This is another country that isn't making headlines; it has fallen off our radar. We no longer worry about it. Daesh has been driven out; they should be okay, right? But a recent Oxfam report highlights the struggles that young people face in Iraq.

Some 61 percent of the population is under 24. W

hile the Daesh reign of terror continued, the Iraqis could not pursue their education and health care was impossible to get. Young people remained uneducated. Girls stayed at home and boys were recruited to fight. One young girl said, "If I could wake up and all my dreams had come true, we would have a new house, better conditions, more money, and a new life where everything is safe." But even this young girl knows that this is just a dream. They won't have all of those things, and perhaps none of them, for a very long time.

A survey carried out by the U.N. revealed that only 57 percent of Iraqi youth were optimistic about the future. Less than 40 percent of young people are enrolled in intermediate education. There is high illiteracy, and the unemployment rate is around 30 percent.

The Guardian interviewed an Iraqi girl twice, at a three-year interval. In the first interview, young Zaynab said that she wanted to be a doctor. When asked what she missed most after having to flee her home to escape ISIS, she answered succinctly, "My books" [and then she burst into tears]. In the last interview, she had just sat her exams. She said: "I won't get the grade... I wanted to be a doctor... to help poor people, and now I can't. I lost three years of my life...."

When the interviewer asks Zaynab why she doesn't retake her exams, she sobs: "There isn't enough money... We are eight in our family. It's not only me." When the matter comes to taking her photograph, Zaynab says: "I am not going to smile... I have lost my education... I have forgotten what happiness is."

If one looks at the situation in Afghanistan, things are not much different. The first conflict in Afghanistan, starting in 1979, tore the country apart. Although this first Soviet-Afghani conflict finally came to an end, Afghanistan was once again plunged into war in 2001. This time with America. The last war has led, according to the South Asia Journal, "a vicious cycle of 'violence, ignorance, seclusion, ethnic conflicts, and socio-economic instability,'" resulting in an Afghani lost generation. The report goes on: "Furthermore, failure of institutions such as the U.N., to timely and adequately assist the Afghan masses could potentially lose another generation... Afghanistan was essentially 'forgotten and abandoned' until September 11, 2001. With 'winds of war' engulfing thousands of Taliban militants, 'the lives of ordinary men women and children in Afghanistan were acutely becoming collateral.'" These ordinary people are the real casualties of America's war in Afghanistan." According to another report published by UNICEF on the effect of war on children in Kabul between the ages of eight to 18 years, over 42 percent of children had lost one or both parents in the conflict. More than 50 percent of the children experienced excessive torture or had witnessed death. UNICEF reports that 85 percent of the children found life "meaningless" and 95 percent of the children interviewed by UNICEF were afraid that they would die during the fighting.

This article could go on listing countries. For example, Palestine, a country with one of the largest youth bulges and where the youth have very little democratic representation and where there is no hope for a better future. For Palestinian youth oppression is the norm. There are reports that young people seek martyrdom as a way out of the hopelessness with which they live every day.

Egypt's education system is one of the worst in the world, ranking 139 out of 140 countries. Children who graduate from primary school often do not know how to read and write. A recent survey found an illiteracy rate of nearly 80 percent in some schools. The teachers are poorly trained, the textbooks inadequate and the curriculum antediluvian.

But worse than this, the lost generation of Egypt is being referred to as the "Imprisoned generation." Children as young as three have been put on trial for "resisting authorities." Young people went to prison for demonstrating against Morsi, only to find themselves back in prison for protesting against the military regime that overthrew Morsi.