The 7 hills that give life to Istanbul 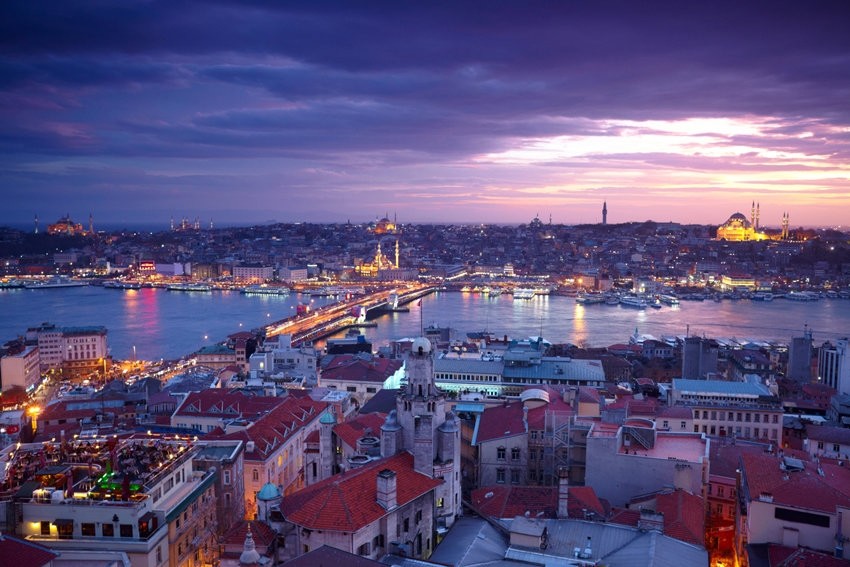 The ancient city of Istanbul was founded on seven hills - the hills that have been the heart of the city since the day the Byzantine emperor Constantine I first laid eyes on the land, but where are these hills? We are about to find out

Seven has always been a mystical number and a favorite digit of many people in the world. Think about stories of the creation of the world, seven sins and seven virtues, seven heavens, seven days of creation, seven gates and layers of hell, or terms of our everyday life such as seven days a week, seven colors of the rainbow, seven notes on the musical scale, the Seven Wonders of the World and so on.

Surrounded by city walls, Istanbul is also built on seven hills. But when did Istanbul start to be called "the seven-hilled town?" It dates back to older times. When Constantine the Great visited the city, he was so impressed that he decided to build a new capital here and built the city on seven hills, based on the fact that the sky has a sun, a moon and five planets. The Byzantine Empire and the Ottoman Empire protected the borders of this seven-hilled town and raised magnificent structures. After the conquest of Istanbul, Ottoman sultans built seven mosques on these seven hills to echo the adhan (call of prayer) sound five times a day. The seven hills are actually located in the area inside the original city walls of the city, which is called the Historical Peninsula.

Prepare yourself then as we travel to the seven hills of Istanbul. Each hill has a different story, a different feeling. Let's learn about these historical hills mentioned in many literary and poetical works. If you want to experience old Istanbul, these hills await you for a road adventure.

"Where are these seven hills?" Let's take a closer look at these hills that decorate the city.

1. The heart of the empire: Sarayburnu Hill

The ancient city of Byzantium was founded on Sarayburnu Hill, the area now known as Sultanahmet Square. Since then, the city has retained its cosmopolitan vibe, and is still one of the most crowded places for tourists on the European side of Istanbul. Sarayburnu means "Palace Point" and extends over the area where the Romans built the glorious Hagia Sophia and the Ottomans built Topkapı Palace, which was not only the residence of the Ottoman sultans, but also the administrative and educational center of the state. Constructed between 1460 and 1478 by Sultan Mehmed II, the conqueror of Istanbul, the palace served as the home of the Ottoman sultans and their court until the middle of the 19th century. And in the 17th century, the Sultanahmet Complex was built by architect Sedefkar Mehmet Aga upon the request of Sultan Ahmed I. Sultanahmet, one of the rare six-minareted mosque in the world, is called the Blue Mosque by foreigners as more than 20 cobalt blue tiles decorate its interior.

2. The light of Osman: Çemberlitaş Hill

This hill is known to be approximately 10 meters higher than Sarayburnu Hill. During Byzantine times, Forum Constantine was built on this hill, along with the Column of Constantine (Çemberlitaş). The Çemberlitaş column was built in A.D 330 by Emperor Constantine. At the top of the column there was a statue of Constantine. The stone was darkened and damaged because of a fire and enclosed in an iron ring in 1701 against danger of collapse. Thus, Çemberlitaş means "ringed stone." According to stories, some objects considered sacred to Christianity were hidden in a room under this column. For the Nuruosmaniye Complex, it can be said that it's the Ottoman Empire's wonderful gift. They blessed the hill with a mosque, the first royal mosque displaying baroque and neoclassical elements, with the Grand Bazaar located right next to it. The complex started to be built by Mahmud I and completed by Osman III. Thus, the baroque styled complex took the name of Nuruosmaniye, meaning "Osman's light."

Among Ottoman works in Istanbul Süleymaniye is a masterpiece. The Süleymaniye Mosque was designed and constructed by Mimar Sinan, the most famous architect of the Ottoman Empire, as ordered by Sultan Süleyman the Magnificent. Construction started in 1550, and the complex was completed in 1557. The minarets in front of the courtyard are shorter than the minarets close to the dome. Thus, Sinan the architect created the image of steps rising to the sky. Beyazıt Hill, one of the highest hills at 60 meters above sea level, was built as a public sanctuary in honor of Nymphs during Byzantine times. Constantine the Great built a forum, which was later rebuilt and renamed the Forum of Theodosius by Emperor Theodosius I. Pantokrator Church, another important landmark of the Byzantine period, was converted into a mosque, which is called "Zeyrek" today.

4. Conqueror of the town: Fatih Hill

If you go to Fatih, Istanbul's fourth hill, you can see the historic walls of the city. Fatih Mosque is the first monumental structure that Mehmed the Conqueror built after conquering Istanbul. During Byzantine times, it was the site of the Church of the Holy Apostles, second in size and importance to Hagia Sophia. It was used as Ecumenical Patriarch of the Greek Orthodox Church, but then abandoned by the patriarch and eventually demolished by the Ottomans to build the Fatih Mosque. According to rumors, Emperor Constantine wanted to be buried in this church after his death. He made tombs representing 12 apostles and prepared a sarcophagus for himself in the middle of these tombs that identified him with Jesus. It is a mystery if the Emperor Constantine was actually buried here, but Fatih the Conqueror was buried in the garden after his death.

This hill slopes up from Golden Horn, ends in the Çarşamba neighborhood and is the closest hill to the Golden Horn. Yavuz Selim Hill includes the modest and elegant Yavuz Sultan Selim Mosque where Yavuz Sultan Selim's tomb is located in its garden, displaying the architecture of pre-conquest Ottoman mosques, the Cistern of Aspar or Sunken Garden of Sultan Selim, Fethiye Mosque or Pammakaristos Church, a Byzantine church that was converted into a mosque, and the Church of St. George, the senior patriarchate of the Greek Orthodox Church and home of the spiritual leader of the world's Eastern Orthodox Christians.

6. The sun and the moon: Edirnekapı Hill

This is the highest peak of the Historical Peninsula, and one of Sinan the architect's most original works, Mihrimah Mosque, is here. The first thing that draws your attention is the light. Thanks to windows open on four sides, the light lines surround the entire space and increase the spiritual effect of the mosque. There are two Mihrimah mosques in Istanbul. One is in Üsküdar on the Anatolian side and the other is in Edirnekapı. According to sayings, Sinan selected the first mosque in Üsküdar for Mihrimah and the other one on the sixth hill to be suitable for the name of Mihrimah, meaning "Sun" and "Moon." On a certain day of the year, the sun goes down behind Edirnekapı, and the moon appears among the minarets of the mosque in Üsküdar. Maybe Mihrimah, known as a very ambitious and powerful woman, wanted to write her name in big letters in Istanbul history, who knows? On the other hand, the Byzantines made the Chora Church, which attracted attention with its eye-catching mosaics. The actual name of the church that appeared in the 11th century, "Chora" means "the widest sphere that encompasses the spiritual realm."

Kocamustafapaşa Hill is different from the other six hills because it is the only one close to the Sea of Marmara. It starts in the Aksaray area and extends to the Theodosian Walls and the Sea of Marmara. It rises up between the Cerrahpaşa and Samatya neighborhoods, reaching almost 60 meters above sea level. This site was famous for its slave bazaar in both Byzantine and Ottoman times until the 19th century. The Haseki Mosque is the main attraction on the hill and was constructed for Hürrem Sultan, the beloved wife of Süleyman the Magnificent and the first woman in court to be actively engaged in politics.