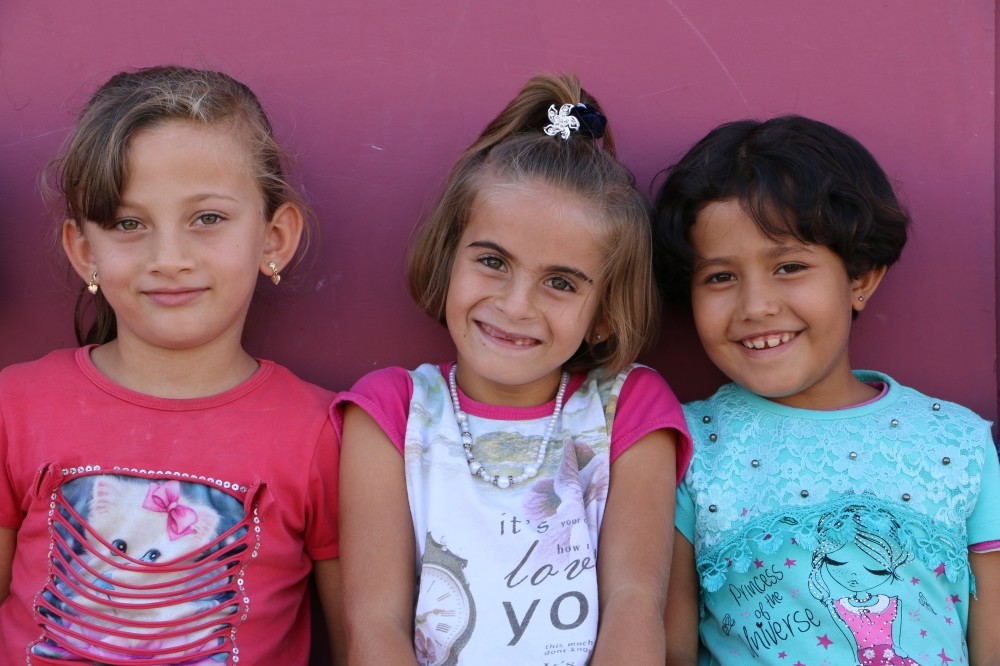 Syrian girls at the Harran Temporary Residential Center in u015eanlu0131urfa, Turkey are photographed with a smile.
by Daily Sabah with AA
Oct 03, 2018 12:00 am

Fleeing eight years ago without any hope for the future, Syrian children are now dreaming of returning home to rebuild their country once the bloody civil war is over

For Syrian children having a peaceful family dinner in their cozy homes is nothing but a dream. Most of them do not even remember their homelands or the last time they spent the night in their own beds without the sound of bombs falling from the skies.

"I love my country so much but I was terrified by the bombs," said 15-year-old Sülef Hassan. "I could not go to school because of the war. But thank God I can continue my education in Turkey."

Sülef is just one of the many Syrian children and families who sought refuge in Turkey. His family decided to flee for their lives and left their home in Aleppo after two of his cousins were killed. 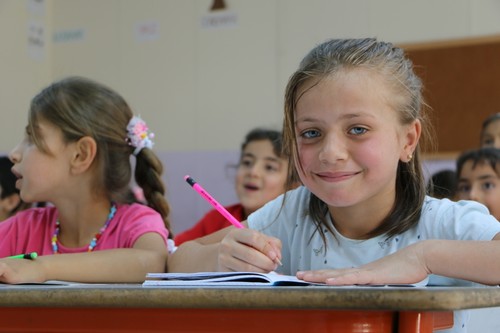 For the last eight years, the ongoing Syrian civil war claimed countless lives and unfortunately most of them were innocent civilians.

The lucky ones - those who were lucky enough to save their lives as well as their children's - started new lives all across the world, but most civilians seek shelter in neighboring Turkey, which hosts around 3.5 million Syrian refugees.

Although the war in Syria still continues, the regions the Turkish Armed Forces (TSK) liberated from terrorist groups with Operation Olive Branch and Operation Euphrates Shield are seeing life return to normal with some refugees returning home, hoping to build a new life from scratch.

However, not everyone is lucky enough to go back. Syrians who are still waiting for peace to return to their homeland reside at camps that are in cities near the border. And for children, life goes on.

Dreaming of happy and peaceful times, Syrian children are trying to forget about the hard times and get ready for what the future holds for them. From education to health services, rehabilitation and playgrounds, the needs of Syrian children are met at the camps with only one thought on everybody's mind: Putting a smile on the faces of these children. Although every one of them has a different story, all of these children want a better life and one day be able to return to their homes.

Fifteen-year-old Milal Bakir is one of the 4,350 children that reside at the Beydağı Residential Facilities in Malatya. The high school student was among the refugees who had to leave their home as their village was bombed by regime forces.

"At first, I was afraid. I did not know what to expect from Turkey and the future. But here, they enrolled us in school, gave us books and pencils," said Bakir with a smile on her face.

Her dream is to finish high school and go to university to be a nurse.

"I will help people in need. Almost all the nurses in Syria came to Turkey. There is no one there to help the wounded. I want to go back to my country and help the children of Syria," Bakir continued. Safiye Yunus, 15, lives in the Harran Temporary Residential Center where 3,800 Syrian students are studying at special schools. She and her family left their home in Deir ez-Zor, Syria six years ago when Yunus was only nine years old. For the last six years, Safiye has attended the school.

"We came here after my cousin died in front of my eyes in the most terrible way. I cried for days and lived the same moment every day. My parents were terrified of the psychological state that I was in and decided to seek refuge in Turkey," said Safiye recalling the moment that changed her life at a very young age for good.

But escaping from a war-torn country is not easy. If the regime had found out the Yunus family's intentions of escape, everything could have fallen apart.

"My parents did not tell anyone of our plans. We escaped one night with the help of our relatives. We walked for days before arriving at the Turkish border."

Safiye and her family lived with the help that comes from Turkey for 45 days before being able to cross the border. They first lived at a container city set up by the Turkish government. Right now Safiye is happy that they could make it to Turkey eventually.

"The education here is great. I am happy to be here. I study hard but in my spare time, I play my saz and read books," she added.

Education is key for refugee children

While Turkey opened its arms to those in need in times of war, the country also looks after the education of refugee children some of whom are even born in Turkey.

According to the Turkish authorities, the school enrollment rate for Syrian refugee children in Turkey has reached nearly 63 percent this year, a success amid efforts to prevent a generation of Syrians from going uneducated. Turkey has granted scholarships to 20,000 Syrian students last year alone.

When the first bombs began to drop on Syrian civilians and the Assad regime began to jail opposition figures, Ayet Derviş's uncle was arrested and some of his close r

elatives were murdered. As an eight year old back then, Ayet could do nothing but worry for his and his family's lives.

"I cried for days. We couldn't do anything. Here, we can go to school with our peers. The education is better than in Syria. I want to become a teacher so that one day I can teach what I know to other Syrian children," said Ayet.

Speaking to the press about the conditions of the Beydağı Residential Facility in Malatya, education coordinator Metin Yaman said there are 4,350 Syrian children residing in the facility and 2,944 of these children are currently studying at the schools that were built by the Turkish government.

Stating that the schools offer social activities and sports along with education, Yaman said: "What we are doing is to offer them a peaceful and happy environment where they can get rid of the shadow of war. When the children first started school, the drawings they made were full of terror and sorrow. Now, things are getting better and better every day. Now, children are dreaming about a better future."