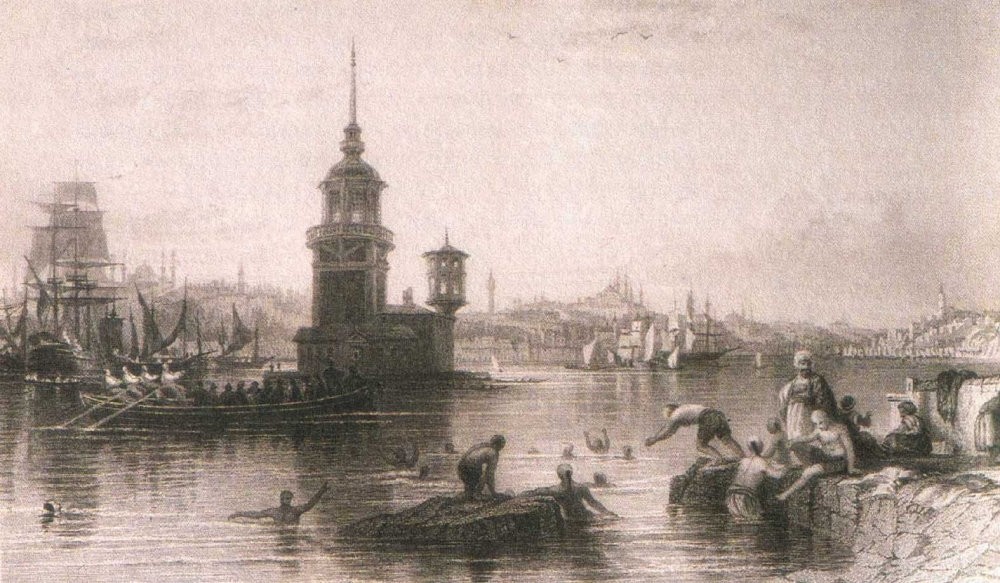 A drawing of Istanbulites taking a dip in the Marmara Sea during the Ottoman times.
by Erhan Afyoncu
Oct 04, 2018 12:00 am

Turks are not known for their swimming skills, however it is hard to overcome the urge of swimming in a country surrounded by water. In order to prevent any unfortunate deaths, Ottoman lifeguards undertook huge responsibilities and were awarded with medals for their bravery

During summer, Turkish media is ablaze with news reports on drowning, which is the second leading cause of death in the country after traffic accidents. Interestingly enough, this is far from being a new occurrence in Turkey as drowning cases were prevalent during the Ottoman Empire as well.

Turks had lived on the steppes for hundreds of years without getting to close to the sea. They stayed away from the water when they first came to Anatolia. However, some Turkmen, who lived in coastal areas, gradually made their way to the sea over time. Various prominent seamen such as Dragut and the Barbarossa brothers were Turks living in eastern Anatolia. Still, many people never warmed up to the sea and for that reason, the number of Turks who knew how to swim was few and far in between. It was prohibited to swim in areas outside the specified locations given by the Ottoman administration. Those who rescued someone who was about to drown was presented with a medal. The work titled "Hayat Kurtarana Osmanlı'dan Madalya" (An Ottoman Medal for Someone Who Saves a Life) by Selman Soydemir, speaks of the topic in detail.

In the first half of the 18th century, the Ottoman Empire started to present medals. During the time of Sultan Abdulmejid I (1839-1861,) new medals were presented under the names of "tahlisiye" (salvage) and "tahlis-i can" (lifeguard). "Tahlis" means "to save." After all, the medal was called the "lifeguard medal." It was not only presented to the rescuers of potential drowning victims but also to people who rescued lives in disasters such as fires, accidents and floods. The regulation for the medal was declared in 1862. It was not presented to everyone who saved lives. To be able to be presented with the medal, one had to risk his or her own life to save another. Thus, a detailed testimonial from the ones who witnessed the incident would be demanded. There were four different types of the medal. The ones, who rescued lives successively, were presented the upper version of the prize. If it was the first time one saved a life, the person was awarded with a medal with a green ribbon. The ribbon was red for the second time, and white for a third rescue. For a fourth rescue, the recipient would be presented with a ribbon bearing all the three colors mentioned.

On Aug. 28, 1904, the boat Haydarpaşa departed for Istanbul from Pendik. While it was waiting for the passenger loading at Kartal Pier, one of the passengers - Yanko, son of Nikola - lost his balance and fell in the sea. It was difficult to help him as he fell between the boat and the pier. While Yanko was about to drown, a naval officer Hamid from Turkey's Samsun jumped into the sea with his clothes on. He pulled Yanko who was drowning out and up onto the shore. Although he swallowed water, Yanko survived. Mehmet Raif, the captain of the boat, Haydarpaşa, the boatswain Hacı Mehmed, chief engineer Ali Rıza along with the ticket officer of Kartal Pier, Halil, reported the case and demanded an award for the mariner. Three days later, the Kartal Municipal Police applied to the Kartal District Governorate with the same demand. Thus, Istanbul's Kartal District Governor Mehmet Rasih, reported the case to Istanbul Municipality. Evaluating the incident, the authorities awarded the mariner, Hamid with a salvage medal.

The medal was not just for incidents in Istanbul. An Armenian citizen from Elazığ's Harput district, Bağdasar, son of Kasbar, came to Seyhan River to swim on July 31, 1906, in the afternoon. He was spending time on the shore as he didn't know how to swim. However, he fell in and almost drowned. The incident was witnessed by the customers sitting at Hadgi Yunus Agha's coffeehouse at the riverbank. Son of Mahmud the candy seller, Musa, who was one of the attendants at the coffeehouse, jumped into the river the moment he saw a man drowning. He grabbed Bağdasar and took him out of the river. As Bağdasar wasn't responding due to the water he swallowed they called the municipality doctor, Abdurrahman Efendi. As the doctor took out some of the water swallowed, Bağdasar regained consciousness. The eyewitnesses reported the incident to the police with a statement on Musa's bravery. Adana Governor Süleyman Bahri Pasha reported the incident to the Ministry of Interior on Aug. 29, 1906. As a result of the correspondence, Musa was awarded with a medal due to his bravery.

The silver salvage medal was 36 millimeters thick and weighed 24 grams. The words on it were written by Naif Efendi, the medal was engraved by James Robertson while Hüsrev Efendi added the sultan's signature. The front of the medal had the signature of Sultan Abdulmejid surrounded by a pattern, while the back had a verse which read: "The ones who help people when they are in danger are memorialized and praised."

The regulation on the medal was as follows: Specially created for the ones who actively gave their all to save lives; the salvage medal is made of silver and its owners are free to wear it whenever they want; the ones who risk their life to be able save people who couldn't escape in case of fire, who are in danger of drowning in sea, river or lakes and the ones who couldn't save themselves in case of an earthquake and similar disasters are awarded with salvage medal, explained Selman Soydemir in his piece"Hayat Kurtarana Osmanlı'dan Madalya" (Ottoman Medal for the Lifeguards).

In the time of the Ottoman Empire, there were no beaches. However, people wanted to swim. Ottoman people couldn't make use of sunbathing and swimming enough. Based on the needs of Islamic requirements of the time, special bath spots were put into service. Called sea baths, the spots were surrounded in a way that hindered outsiders from watching the swimmers. Since people couldn't swim in the open the enclosed-open air venues were built with a pool in the middle. The sea baths for men and women were at different spots. People used to swim, enjoy their time and sunbathe at the sea baths.