Beyond the crime scene: Defining characteristics of Khashoggi murder 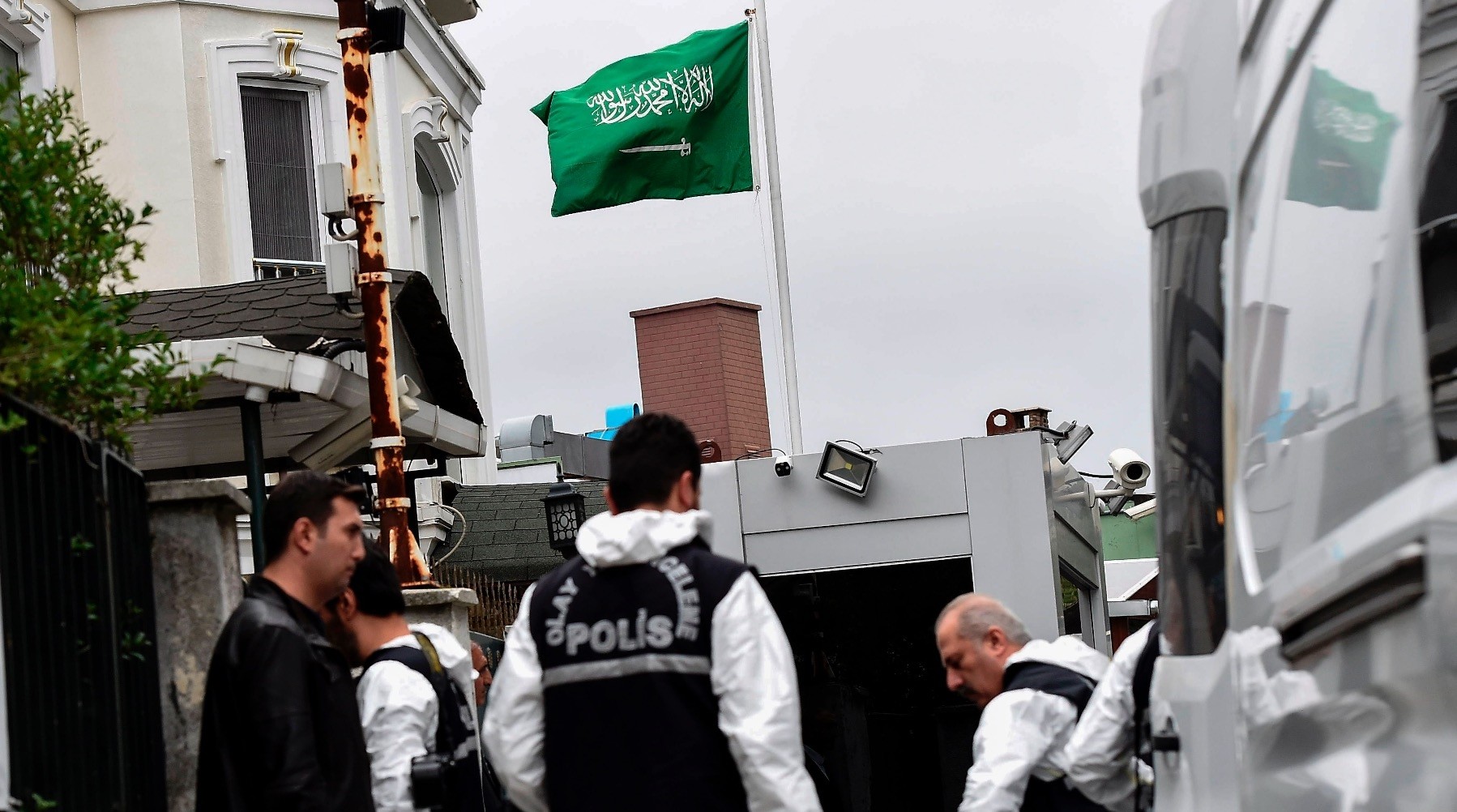 For the last three weeks, the world fixed its eyes on the disappearance of Saudi journalist Jamal Khashoggi, who was never seen again after entering the Saudi consulate. Now it is clear that the journalist was murdered and solving this mysterious and highly political crime bears the utmost importance

The mysterious disappearance of 59-year-old Jamal Khashoggi, a self-exiled dissident journalist from Saudi Arabia, has rattled international headlines since Oct. 2 when he was last seen entering his consulate in Istanbul, Turkey.

Mr. Khashoggi, who had to visit the Saudi Consulate to collect official papers for his upcoming marriage, vanished into thin air.

Despite Khashoggi's strong ties to the Riyadh elite, he was a vocal critic of the Saudi government's foreign policies as well as its systematic harassment and repressive behavior toward its own citizens who voice dissenting opinions on the reforms needed in the country. Khashoggi had become just another name on the list of the Saudi government who had to be silenced, just like journalist Fayez bin Damakh, who has been missing since 2017.

Whether it is a sexually sadistic murder, manslaughter or a personal cause murder, homicides are categorized depending on the motive of the perpetrators. Although traditional criminological theories and law enforcement classification manuals explore homicides such as contract killings or politically motivated killings, they fail to fully and comprehensively address political crimes committed by governments. Perhaps it will not be incorrect to state that some governments and their henchmen have done more harm to their own citizens than most criminals under the name of protecting the state and enforcing the law. 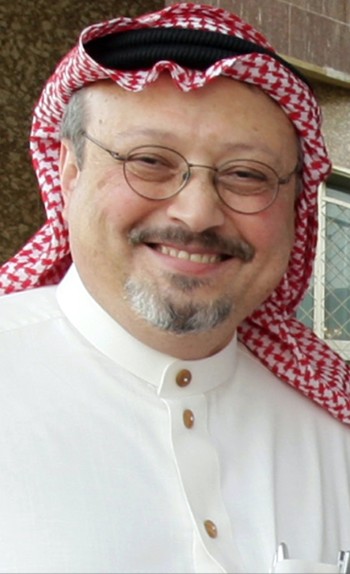 Prominent Saudi journalist Jamal Khashoggi seen in the Saudi capital Riyadh before taking refuge in the U.S. in 2017.

Amnesty International reports that many countries with totalitarian and authoritarian regimes are leading transgressors in the violation of human rights. Some of the activities of such regimes include the use of internal security police and intelligence members threatening individuals, conducting illegal surveillance, torture and character assassination or "disappearances." However, it ought to be noted too that, even countries like the U.S., which prides itself on its liberalism and stance on human rights issues, had also undertaken many strategies of harassment; for instance against Martin Luther King Jr. during the black rights movement initiated by the FBI and its first director, J. Edgar Hoover.

Khashoggi's sharp criticisms of the Saudi government may have evoked some unlawful action and once the dissident journalist arrived at the consulate general in Istanbul for the first time on Sept. 28, the foundations for a plan may have been set. Khashoggi was to return back to the consulate general for another appointment to pick up his official papers on Oct. 2. What Khashoggi was unaware of was the fact that the die was cast.

In the early hours of Oct. 2, a private jet belonging to Sky Prime Aviation landed at Istanbul Ataturk Airport with its nine passengers. While another commercial flight brought another six passengers who eventually stayed in two hotels in Istanbul. Some 13 of these individuals returned back on the same private jet the same day while two of them used commercial flights in less than 24 hours of their arrival. Turkish authorities found the travel and behaviors of this "squad" to be suspicious and conducted an investigation into their whereabouts during their stay in Istanbul and eventually found them travelling in consular vehicles. 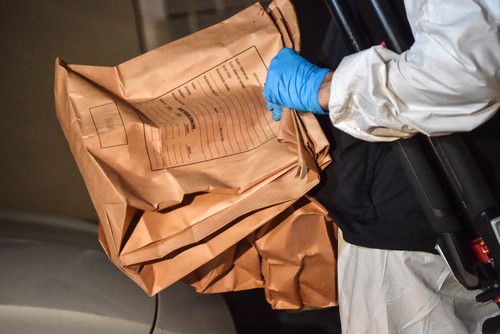 A Turkish forensic police officer carries bags of evidence while he leaves the Saudi Consulate in Istanbul, Oct. 18.

Every type of homicide has certain defining characteristics that illustrate cues as to the motivation of the crime and possible profiles of offenders through its crime scene features. The Khashoggi case may have been a government-ordered hit, with its assassination team deployed from Saudi Arabia to take care of it. Furthermore, an analysis can be made in regards to this case carrying traits of a contract killing – only in this case with government officials involved as perpetrators. In crime analysis, contract killings have certain features that differentiate them from other forms of homicides in relation to the victimology, offender profile and behavior as well as the staging of the crime scenes and weapon selections.

Contract killings are generally ordered by a third party who perceives the victim to be an obstruction to the attainment of his or her goals. This may be applicable for material gain, territory, extramarital affairs or for political reasons, which seems to be the case with Khashoggi. In such cases, those hired to eliminate the target will not have any former relationship with the victim. Offender risk of such offenders is also dependent on the expertise and experience of the perpetrators committing these types of killings. The fact that a large team containing one member with forensic science experience in the Khashoggi case would have been planned to ensure that the murder would be controlled with the number of people involved and forensic evidence eliminated with the presence of an expert. This disappearance had to be a quick and clean kill.

Another crime scene indicator in such types of murders is the amount of time spent at the crime scene. CCTV images in this case show numerous consular vehicles entering the offices at 12:15 p.m. and shortly afterwards at 1:14 p.m. the arrival of Jamal Khashoggi at the diplomatic mission office is seen. Mr. Khashoggi is never seen leaving the building again while two consular vehicles leave the offices and head to the consular residence in less than two hours. A killing of such nature, where a third-party is contracted, almost always spends the minimum amount of time necessary at a crime scene. This also provides evidence as to the level of offender sophistication and professionalism. It is highly possible that Mr. Khashoggi would have walked into an ambush, which is a common style in these murders, where he was overpowered in the office, with perhaps an injection, in order to control both the victim and the crime scene leaving minimum levels of forensic evidence behind. The choice of weapon is also a significant indicator to the level of professionalism of the murderers as it must be untraceable and available.

There are many ways to classify a crime scene. Contrary to popular belief, crime scenes are not only limited to where the body of a victim of crime is found. It is crucial to understand that the primary crime scene involves the original location at which the crime is committed and any other subsequent locations including the transport and the dumping site would be the secondary crime scenes. However, crime scenes are also not limited to a location of the criminal act or disposal of the body, but also to the macroscopic and microscopic crime scenes within a crime scene such as the victim's body, the suspect's body, houses, vehicles that may have been a part of the actual criminal act. In the Khashoggi case, a body is yet to be discovered, which limits the criminal investigation in numerous ways. However, this in itself is a crucial crime scene indicator that reflects, once again, the premeditation of the murder as well as the systematic and orderly approach of the offenders in carrying out this crime as quickly as possible and escaping undetected.

In contract killings there are certain investigative considerations that investigators can make. The nature of the crime itself and the crime scene indicators are all signs in proving a level of premeditation. The official statements by the Saudi government in regards to an "accidental killing" following the crime scene analysis by Turkish authorities do not seem to be realistic. This, however, can only be proven forensically after an examination of all evidence is collected at all of the crime scenes including the consulate, the garden of the consulate, the residence and consular vehicles. Yet, what can be helpful in this case would be to also scrutinize the communications between the suspicious team flown in and the consular staff between the dates of Sept. 28 and Oct. 2.

The Vienna Convention states that all diplomatic missions are technically sovereign land and must be protected by the host countries. Since news of Khashoggi's disappearance, the Saudi government adopted a stalling tactic and only allowed Turkish authorities to enter the consulate building after two weeks. As the suspected team of 15 escaped undetected and a team of cleaners was seen entering the consular building before the search, it is only natural to assume a cover up. Ideally the capture and interrogation of the members flown in would have shed light to the investigation in many ways. Generally, as seen with these types of professional killers, a certain post-offense behavior surfaces during an interrogation. If any members of this assassination team had been captured, their interrogations would have demonstrated selective recall during their questioning. In other words, they would have had uncharacteristically detailed and airtight alibis for the time period of the murder, in which they would have most likely given specific times and precise details as to their actions during this timeframe. On the other hand, they would have displayed far less detailed and precise information for the time periods preceding and following the actual murder.

There is no doubt that with the stalling of the Saudi government, the escape of the suspects and the missing body, the Khasshogi case is going to be a difficult homicide to investigate. Yet, the investigation is far from over. A thorough analysis of the crime scenes including the consulate building and garden, the consular vehicles, the residence and the hotel rooms of the suspects will surely shed light onto this mystery. Therefore, it is necessary for the Turkish authorities to conduct, identify, collect and reconstruct the crime and rely solely on the only source where the information will be available: the crime scenes.

Istanbul police are an elite and outstanding force that is known for its attention to detail and meticulous work in dealing with and solving crimes. Although we have been following their search and analysis these past few days, this just shows the level of professionalism and scrupulous work conducted by the force. It is such level of competence and coordinated team effort that will assist in the successful processing of the crime scenes, the evidence collected and the reconstruction of the crime that will eventually answer the mystery behind the Khashoggi case.

* Hatice Han Er has BA from La Trobe University, postgraduate degree in Education from RMIT University and an MA in Criminology and Criminal Justice from Griffith University.